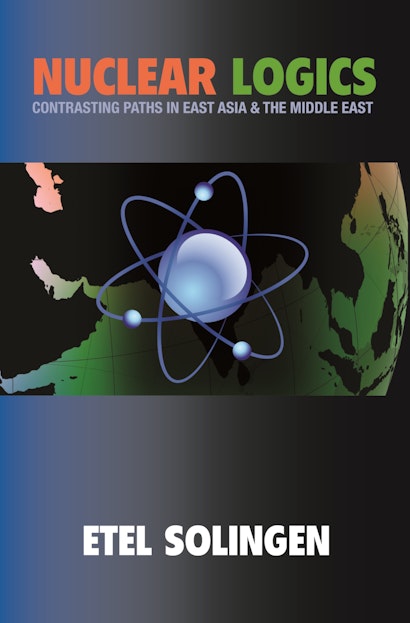 Nuclear Logics examines why some states seek nuclear weapons while others renounce them. Looking closely at nine cases in East Asia and the Middle East, Etel Solingen finds two distinct regional patterns. In East Asia, the norm since the late 1960s has been to forswear nuclear weapons, and North Korea, which makes no secret of its nuclear ambitions, is the anomaly. In the Middle East the opposite is the case, with Iran, Iraq, Israel, and Libya suspected of pursuing nuclear-weapons capabilities, with Egypt as the anomaly in recent decades.

Identifying the domestic conditions underlying these divergent paths, Solingen argues that there are clear differences between states whose leaders advocate integration in the global economy and those that reject it. Among the former are countries like South Korea, Taiwan, and Japan, whose leaders have had stronger incentives to avoid the political, economic, and other costs of acquiring nuclear weapons. The latter, as in most cases in the Middle East, have had stronger incentives to exploit nuclear weapons as tools in nationalist platforms geared to helping their leaders survive in power. Solingen complements her bold argument with other logics explaining nuclear behavior, including security dilemmas, international norms and institutions, and the role of democracy and authoritarianism. Her account charts the most important frontier in understanding nuclear proliferation: grasping the relationship between internal and external political survival. Nuclear Logics is a pioneering book that is certain to provide an invaluable resource for researchers, teachers, and practitioners while reframing the policy debate surrounding nonproliferation.

Etel Solingen is Distinguished Professor and Thomas T. and Elizabeth C. Tierney Chair in Peace and Conflict Studies at the University of California, Irvine, and the recipient of the National Academy of Sciences 2018 William and Katherine Estes Award.

"Nuclear Logics is a ground-breaking work demonstrating how theory-oriented studies in political science should be conducted. Nuclear Logics is an admirable undertaking which makes an indispensable contribution to IR theory development."—Shih-Yu Chou, Political Studies Review

"The most comprehensive, theoretical, and systematic challenge [to system-level imperatives] in years. . . . This is an impressive work . . . of primary value to experts and graduate students."—International Studies Review

"A serious, scholarly piece of work . . . reinvigorating the already rich theoretical debate on this issue. . . . Her methodological tools could prove useful in determining which Middle Eastern countries are more likely to go nuclear in reaction to Iran's programme."—Survival

"The cutting edge of nonproliferation research . . . should be of great interest to both policy practitioners and scholars. [This book] display(s) a combination of theoretical sophistication, methodological rigor, focused comparative analysis involving original field research, and attention to hypothesis testing rarely found in the nonproliferation literature."—International Security

"Nuclear Logics is a timely study with important theoretical and practical implications. At the theoretical level, it encourages us to set aside monocausal explanations in favour of a more sophisticated but still transportable approach. At the practical level, the message that endogenous forces are vital to explaining the origins of nuclear behaviour can be incredibly valuable to policymakers who too often see proliferation as a simple action-reaction phenomenon driven by monolithic political forces. It deserves a wide readership."—Michael Vance, International Affairs

"[A]mbitious, insightful, and informative. . . . The book is most impressive . . . in its deliberate and judicious assessment of explanations drawn from relevant realist, neoliberal, constructivist, and democracy literatures. Indeed, the reasoned assault on realist arguments gives this book considerable punch."—James H. Lebovic, Political Science Quarterly

"Debates about the relevance of systematic political science theory for the maker of concrete policy decisions will perhaps never end. Solingen is to be congratulated for creating an interesting vehicle for such debate."—George H. Quester, International History Review

"In addition to her innovative argument, Solingen's research design and the way she carries it out are impressive. Solingen does a carefully focused comparison of nine states in East Asia and the Middle East and, in doing so, provides an excellent example of rigorous qualitative research that should appear on graduate method course syllabi."—Victor Asal, Journal of Peace Research

"In order to curb nuclear-weapons proliferation, it is of fundamental importance to identify the underlying rationale for certain states to seek a nuclear-weapons option, as well as to understand why the vast majority of states, possessing the necessary technology, do not develop nuclear weapons. The international community still has much to learn in this regard and Nuclear Logics is a valuable and timely contribution to this discussion."—Dr. Hans Blix, chairman of the Weapons of Mass Destruction Commission

"Professor Solingen has illuminated an important and often neglected aspect of nuclear motivations, namely the domestic conditions that underlie a country's decision to acquire nuclear weapons. Her well-researched and powerful argument asserts that nuclear-weapons programs are more likely to emerge from states that are hostile to economic openness and, conversely, that they are less likely where states are more willing to integrate with the global political economy."—Mitchell B. Reiss, College of William and Mary

"Solingen not only provides a cogent account of the divergent nuclear trajectories of East Asia and the Middle East, but develops a powerful general explanation resting on whether the state's ruling coalition is inward looking or is geared to integrating with the rest of the world. Both in its challenge to standard views and in its strong positive arguments, this is a study of great value."—Robert Jervis, Columbia University

"Nuclear Logics is a first-class piece of work. It deals with a prominent issue, and its central approach—doing a focused, detailed comparison of two regions that started out much the same but have differed in their subsequent histories on proliferation—generates a wealth of interesting and instructive insights."—John Mueller, Ohio State University

"What is most impressive and significant about Solingen's scholarship is its breadth. Her prose is clear and often elegant. I believe her book, which truly is pioneering in both the international-relations and nonproliferation fields, is accessible to both scholars and university students. I am sure it will become required reading in many graduate courses."—William C. Potter, Monterey Institute of International Studies