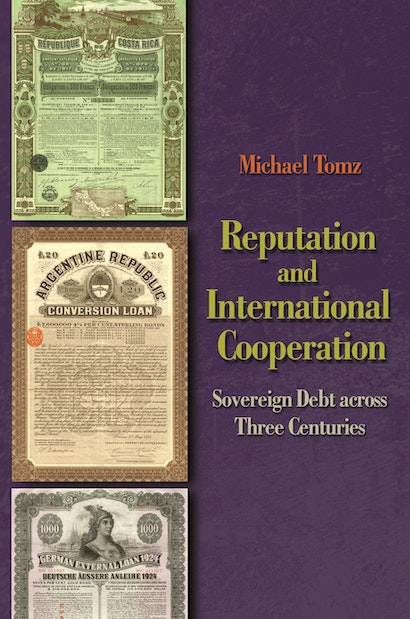 
Tomz’s theory generates novel predictions about the dynamics of cooperation: how investors treat first-time borrowers, how access to credit evolves as debtors become more seasoned, and how countries ascend and descend the reputational ladder by acting contrary to investors’ expectations. Tomz systematically tests his theory and the leading alternatives across three centuries of financial history. His remarkable data, gathered from archives in nine countries, cover all sovereign borrowers. He deftly combines statistical methods, case studies, and content analysis to scrutinize theories from as many angles as possible.


Tomz finds strong support for his reputational theory while challenging prevailing views about sovereign debt. His pathbreaking study shows that, across the centuries, reputations have guided lending and repayment in consistent ways. Moreover, Tomz uncovers surprisingly little evidence of punitive enforcement strategies. Creditors have not compelled borrowers to repay by threatening military retaliation, imposing trade sanctions, or colluding to deprive defaulters of future loans. He concludes by highlighting the implications of his reputational logic for areas beyond sovereign debt, further advancing our understanding of the puzzle of cooperation under anarchy.

"In an extraordinarily well-researched and very interesting book on the not so interesting subject of sovereign debt, Michael Tomz shows that contrary to popular belief and several dominant theories, states do now and have always cared about their international financial reputations."—Anastasia Xenias, Political Science Quarterly

"Tomz has gathered a large amount of quantitative and qualitative historical evidence from archives and libraries in nine countries. International historians can benefit both from reading his case studies and from thinking about the role of market forces in international relations in the light of his theory on sovereign debt."—G.C. Peden, The International History Review

"In Reputation and International Cooperation, Michael Tomz uses the experience of international lending over four centuries to assess the sources of international conflict and cooperation. Tomz argues that debtors collaborate with creditors because they are concerned about their reputations, refuting a host of widely accepted explanations for why sovereign debtors pay their debts. He marshals a wealth of evidence, ranging over time from eighteenth-century Amsterdam to the present, and using everything from bond yields through data on military disputes to current interviews. The result is a remarkably thorough, concise, and convincing analysis of the political economy of international debt with profound implications for the study of international politics more generally."—Jeffry Frieden, Harvard University

"Based on meticulous research from a wide variety of sources, Tomz's book clearly establishes the importance of a state's previous behavior and its resulting reputation for the rate of interest it must pay when it next enters the international financial market. Carefully conceived and ingeniously executed, this study is a real model."—Robert Jervis, author of System Effects and Perception and Misperception in International Politics

"This book is a gem. I cannot think of a better book on political economy and economic history. In all important categories, the book makes major contributions. Tomz's argument is original and logically compelling, and it produces unique, testable implications. His data represent years of painstaking research and stand as an almost impossible achievement."—J. Lawrence Broz, University of California, San Diego

"No other work in international relations is more impressive in its systematic use of so many kinds of evidence—archival, available quantitative data, case studies—to test such a clear set of alternative hypotheses. Michael Tomz has produced a pathbreaking study."—Robert Keohane, Princeton University