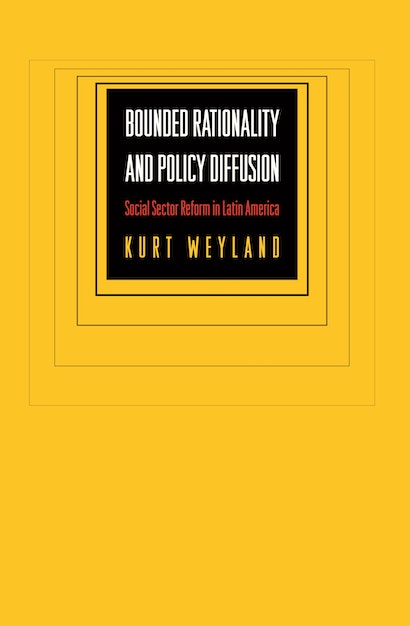 Why do very different countries often emulate the same policy model? Two years after Ronald Reagan’s income-tax simplification of 1986, Brazil adopted a similar reform even though it threatened to exacerbate income disparity and jeopardize state revenues. And Chile’s pension privatization of the early 1980s has spread throughout Latin America and beyond even though many poor countries that have privatized their social security systems, including Bolivia and El Salvador, lack some of the preconditions necessary to do so successfully.


In a major step beyond conventional rational-choice accounts of policy decision-making, this book demonstrates that bounded — not full — rationality drives the spread of innovations across countries. When seeking solutions to domestic problems, decision-makers often consider foreign models, sometimes promoted by development institutions like the World Bank. But, as Kurt Weyland argues, policymakers apply inferential shortcuts at the risk of distortions and biases. Through an in-depth analysis of pension and health reform in Bolivia, Brazil, Costa Rica, El Salvador, and Peru, Weyland demonstrates that decision-makers are captivated by neat, bold, cognitively available models. And rather than thoroughly assessing the costs and benefits of external models, they draw excessively firm conclusions from limited data and overextrapolate from spurts of success or failure. Indications of initial success can thus trigger an upsurge of policy diffusion.

Kurt Weyland is professor of government at the University of Texas, Austin. He is the author of The Politics of Market Reform in Fragile Democracies (Princeton) and Democracy without Equity: Failures of Reform in Brazil.

"This is an interesting and illuminating book, which will no doubt make an important contribution to our understanding of social sector reforms in the region and elsewhere. Some of its findings challenge widely held views. . . . The operationalisation of bounded rationality perspectives in a cross-national policy reform context will make an important addition to the toolbox available to researchers."—Latin American Studies

"Where do new policy ideas come from? In this important book, Kurt Weyland provides an answer that satisfies both theory and practice; his findings cross disciplinary boundaries with aplomb, insight, and superb analysis of policy decision-making."—Merilee S. Grindle, Harvard University

"This is a very innovative and fruitful work that accounts better than other approaches for the crucial economic policy decisions studied by Weyland."—Guillermo O'Donnell, University of Notre Dame

"This book contains a highly innovative perspective for understanding how policymaking takes place in Latin America. The use of models of bounded rationality, applied to a remarkably vast base of empirical information, provides provocative insights into how particular policies are adopted and how the real elements of rationality that intervene in such adoption are constrained by a series of cognitive factors. This work should become a source of reflection for both national policymakers and the staff of international organizations."—Juan Carlos Navarro, Inter-American Development Bank

"This outstanding book will have a major impact on comparative politics, since it provides a comprehensive defense of the bounded rationality perspective and applies it carefully to explain patterns in the diffusion of pension and health reform in Latin America."—Mitchell Orenstein, Syracuse University

"Well organized and well written, this book makes two broad contributions to our understanding of the diffusion of social sector policies, and more generally to the comparative politics of public policy. First, in a valuable commentary on previous research, it demonstrates convincingly that some of the theories and generalizations in the literature are frequently overstated. Second, and quite originally, it offers an alternative conception of the process of policy choice."—Joan M. Nelson, Princeton University