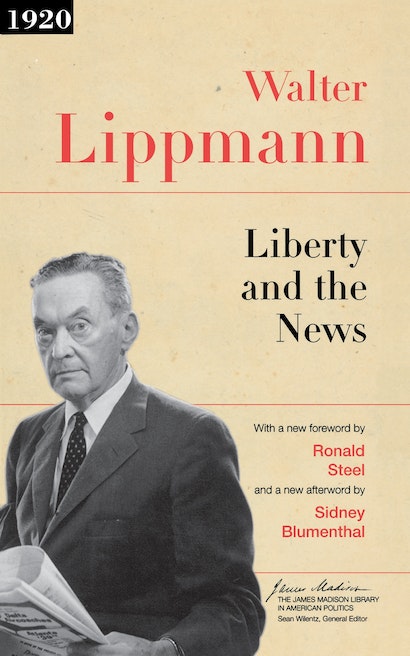 Liberty and the News is Walter Lippman’s classic account of how the press threatens democracy whenever it has an agenda other than the free flow of ideas. Arguing that there is a necessary connection between liberty and truth, Lippman excoriates the press, claiming that it exists primarily for its own purposes and agendas and only incidentally to promote the honest interplay of facts and ideas. In response, Lippman sought to imagine a better way of cultivating the news.

A brilliant essay on a persistent problem of American democracy, Liberty and the News is still powerfully relevant despite the development of countless news sources unimagined when Lippman first published it in 1920. The problems he identifies — the self-importance of the press, the corrosion of rumors and innuendo, and the spinning of the news by political powers — are still with us, and they still threaten liberty. By focusing on the direct and necessary connection between liberty and truth, Lippmann’s work helps to clarify one of the most pressing predicaments of American democracy today.

Walter Lippmann (1889-1974) was a prominent American essayist and editor. His many books include A Preface to Politics, Public Opinion, A Preface to Morals, and The Good Society. Ronald Steel is professor of international relations and history at the University of Southern California. He is author of Walter Lippman and the American Century. Sidney Blumenthal, former adviser to President Bill Clinton, is the author of How Bush Rules (Princeton) and a regular columnist for the Guardian and Salon.com.

"Why republish this old book? In its new format, it features an introduction by Lippmann biographer Ronald Steel, who economically places the book in the context of its day. There's also an afterword, nearly half as long as Lippmann's book, by the journalist, former Clinton Administration insider and newly appointed Clinton (Hillary that is) adviser Sidney Blumenthal.... If there is a rationale for republishing Liberty and the News, it surely must be to give Lippmann's diagnosis and prescriptions a further airing. If we do, we see not only new energy in journalism education but clear evidence that Lippmann's political observatories have taken hold."—Michael Schudson, The Nation

"Lippmann's concern more than four generations ago was not about journalists, but about the impact poor journalism was having on readers, or more to the point, on the citizens in this democracy. We should have the same concern today."—Timothy J. McNulty, Chicago Tribune

"It is absolutely necessary to read it slowly, paragraph by paragraph, in order to follow the 'precocity' of Walter Lippmann. It is quite obvious, that the author would have seen today, 90 years after he wrote the pages, the same crisis of journalism. His critical remarks however, deserve attentive reading and observance. We would strongly recommend it, but: Be careful, don't read too much at a time, unless you do not want to be mingled in a plethora of philosophical remarks!"—Henn-Jüri Uibopuu, Vienna Online Journal on International Constitutional Law

"There is great merit in reading old books because you find that current preoccupations are always echoes of past debates, although of course the context changes. Lippmann's essay is full of insight and seems particularly timely again now."—Enlightened Economist