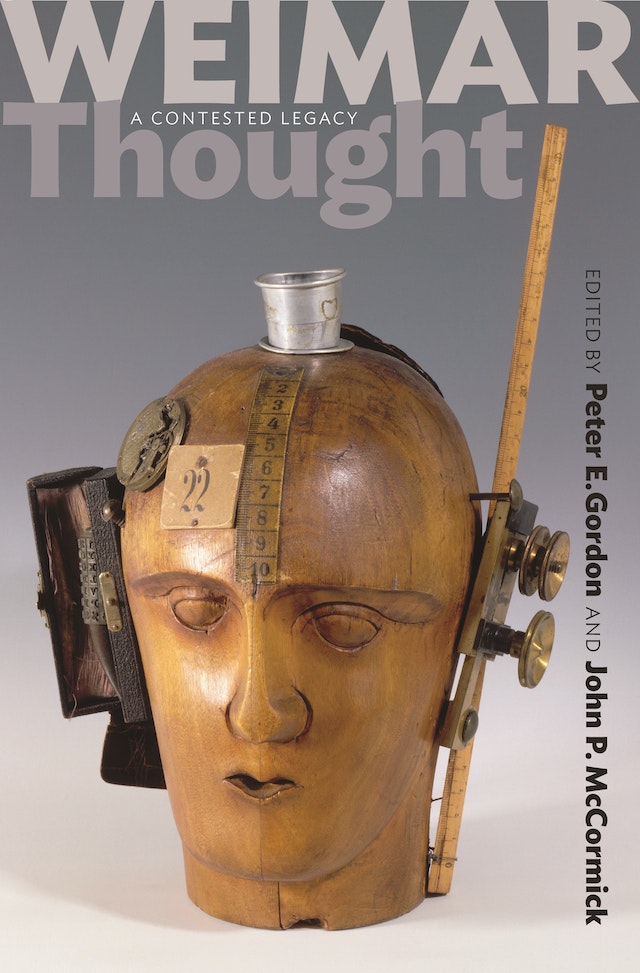 During its short lifespan, the Weimar Republic (1918–33) witnessed an unprecedented flowering of achievements in many areas, including psychology, political theory, physics, philosophy, literary and cultural criticism, and the arts. Leading intellectuals, scholars, and critics—such as Hannah Arendt, Walter Benjamin, Ernst Bloch, Bertolt Brecht, and Martin Heidegger—emerged during this time to become the foremost thinkers of the twentieth century. Even today, the Weimar era remains a vital resource for new intellectual movements. In this incomparable collection, Weimar Thought presents both the specialist and the general reader a comprehensive guide and unified portrait of the most important innovators, themes, and trends of this fascinating period.

The book is divided into four thematic sections: law, politics, and society; philosophy, theology, and science; aesthetics, literature, and film; and general cultural and social themes of the Weimar period. The volume brings together established and emerging scholars from a remarkable array of fields, and each individual essay serves as an overview for a particular discipline while offering distinctive critical engagement with relevant problems and debates.

Whether used as an introductory companion or advanced scholarly resource, Weimar Thought provides insight into the rich developments behind the intellectual foundations of modernity.

Peter E. Gordon is the Amabel B. James Professor of History at Harvard University. His books include Continental Divide and Rosenzweig and Heidegger. John P. McCormick is professor of political science at the University of Chicago. His books include Machiavellian Democracy and Weber, Habermas, and Transformations of the European State.

"By seeking understanding and refraining from evaluative synthesis, every contribution in this volume prompts the reader to reflect on lessons of Weimar in light of the present social, political, and cultural situation. Its innovative methodological outlook and its numerous field-specific interventions make Weimar Thought an indispensible resource for any future studies of the epoch."—Dennis Johanssen, German Quarterly

"This sophisticated compendium of 19 essays by leading scholars in history, cultural studies, political science, and philosophy attempts to address the complexity, importance, and legacy of one of the 20th century's most important eras of intellectual activity. . . . [T]hese intellectual histories are not very connected to context, providing instead effective overviews and suggesting some new ways to consider intellectual giants of the 20th century. That feat is impressive and valuable."—Choice

"This is the first work in a generation that presents a comprehensive overview of Weimar culture with all its complexity and contradictions. It successfully shows continuities and discontinuities with the past, and tensions that resist reduction. The book's reach—from theology to the biological sciences, and literary criticism to legal theory—goes far beyond any other volume I am aware of on the same subject."—Peter Carl Caldwell, Rice University

"In the annals of cultural history, the Weimar Republic was an ideational crucible that bears comparison only with classical Athens and Renaissance Florence. In many respects, as a site of modernity, its achievements remain unsurpassed. Weimar Thought revisits this legacy in ways that are fresh, rich, thought provoking, and subtle. It is destined to become the standard work on the Weimar experience for years to come."—Richard Wolin, author of Heidegger's Children: Hannah Arendt, Karl Löwith, Hans Jonas, and Herbert Marcuse

"This collection provides readers with a clear introduction to the riches of intellectual life in Weimar Germany and contextualizes many of the trends and innovations that took place there. Essential for anyone interested in the philosophical, theological, historical, political, legal, aesthetic, and scientific movements of Weimar Germany, this book will have a wide audience."—Leora Batnitzky, Princeton University

"The years of the short-lived Weimar Republic witnessed a remarkable burgeoning of intellectual and cultural activity. Incorporating recent theoretical and methodological currents, and more recent advances in empirical scholarship, this timely volume brings together outstanding scholars of the field and synthesizes this crucial moment in modern culture."—Warren Breckman, University of Pennsylvania