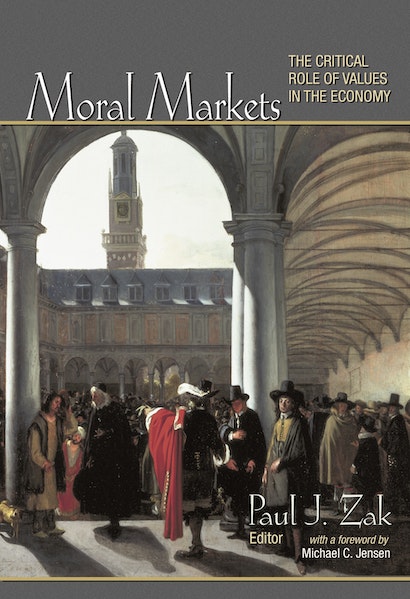 Like nature itself, modern economic life is driven by relentless competition and unbridled selfishness. Or is it? Drawing on converging evidence from neuroscience, social science, biology, law, and philosophy, Moral Markets makes the case that modern market exchange works only because most people, most of the time, act virtuously. Competition and greed are certainly part of economics, but Moral Markets shows how the rules of market exchange have evolved to promote moral behavior and how exchange itself may make us more virtuous. Examining the biological basis of economic morality, tracing the connections between morality and markets, and exploring the profound implications of both, Moral Markets provides a surprising and fundamentally new view of economics — one that also reconnects the field to Adam Smith’s position that morality has a biological basis. Moral Markets, the result of an extensive collaboration between leading social and natural scientists, includes contributions by neuroeconomist Paul Zak; economists Robert H. Frank, Herbert Gintis, Vernon Smith (winner of the 2002 Nobel Prize in economics), and Bart Wilson; law professors Oliver Goodenough, Erin O’Hara, and Lynn Stout; philosophers William Casebeer and Robert Solomon; primatologists Sarah Brosnan and Frans de Waal; biologists Carl Bergstrom, Ben Kerr, and Peter Richerson; anthropologists Robert Boyd and Michael Lachmann; political scientists Elinor Ostrom and David Schwab; management professor Rakesh Khurana; computational science and informatics doctoral candidate Erik Kimbrough; and business writer Charles Handy.

Paul J. Zak is founding director of the Center for Neuroeconomics Studies and professor of economics at Claremont Graduate University. Zak also serves as professor of neurology at Loma Linda University Medical Center and senior researcher at UCLA.

"Moral Markets challenges the 'homo economicus' rational choice framework of mainstream economics with 15 chapters contributed by a team researching the nature of values in economic thinking. Zak has compiled what may become a starting point for further work on this topic, given the volume's scope and creative insights. After philosophical reflections from Aristotle to Adam Smith on the origin and nature of values, the readings focus on evolutionary processes that form values like fairness and reciprocity. . . . [T]his collection is important in helping to reconsider the value-free claims of economics."—J. Halteman, Wheaton College, for, CHOICE

"The book's span is huge, taking in cooperation among chimpanzees, the status of moral emotions, and the role of contract law in encouraging trustworthy behaviour, as well as areas more familiar to economists such as the effect of incentive schemes on employee effort. . . . Moral Markets is an interesting and valuable book, addressing important and under-researched questions."—Joe Perkins, World Economics

"Moral Markets is a fascinating indicator in its own right of trends in thinking about markets. . . . This . . . should be part of strategic thinking for any senior manager, in library work and beyond. This is also an attractive addition to the economics and business ethics shelves of any academic library."—Stuart Hannabuss, Library Review

"Moral Markets is challenging not only because it brings to bear a wide variety of scientific fields of inquiry but also because it is willing to buck widely held assumptions about markets and what human nature really is. By drawing the best available science, it manages to offer a sense both of objectivity and of hope that perhaps we are not as nasty and brutish as we sometimes seem."—Ray Bert, Civil Engineering

"This is an interesting and important collection of essays, indicating some important shifts of thinking and some of the positive benefits of work in 'neuro-economics'."—Geoffrey M Hodgson, Journal of Economic Issues

"Moral Markets provides the serious student of business, government, and society with the necessary intellectual tools to reengineer their knowledge and practice of virtue, and perhaps enlighten them on why and how 'goodness' ultimately serves society."—Sean D. Jasso, PhD, Graziado Business Report

"Everyone who is vaguely interested in how motivated choice interacts with morals should own this collection. The bibliographies span a dozen research areas and offer precise guidance to enter ongoing discussions."—David M. Levy, Journal of Bioeconomics

"Moral Markets provides a surprising and fundamentally new view of economic one that also reconnects the field to Adam Smith's position that morality has a biological basis."—World Book Industry

"Most people are fundamentally honest, trustworthy, and fair. Why? Because they have a capacity for empathy and trust that is just as innate as their capacity for selfishness. It evolved in order to enable people to capture social benefits through exchange. Markets not only need that instinct; they also nurture it. This simple and beautiful idea has been disinterred by the authors of this book from beneath the cynical sophistries of the twentieth century."—Matt Ridley, author of The Origins of Virtue

"Before he became famous as the father of free-market capitalism through The Wealth of Nations, Adam Smith wrote The Theory of Moral Sentiments, a long-forgotten and still little-known treatise about the role of values and virtues in economic and social life. At last, science has caught up with Smith, and now Paul Zak has gathered leading scholars and scientists in a definitive volume on why markets are moral. This paradigm-shifting book is required reading not only for economists, but for all behavioral scientists."—Michael Shermer, publisher of Skeptic, columnist for Scientific American, and author of The Mind of the Market

"Understanding how values are reflected in markets, and how markets either reduce or increase their positive or negative effects on human welfare, is obviously important. The work of the scholars represented in this volume contributes significantly to these issues and adds substantially to the foundations of analysis that will eventually lead to a richer and more complete understanding of these issues.I look forward to seeing the creation of an entirely new field of inquiry in economics, and in its sister social sciences, focused deeply on the positive analysis of the role of values in elevating the possible outcomes of human interaction. . . . The role of values is a purely positive question for economics and the other social sciences, and this volume begins that journey toward creating such a science."—from the foreword by Michael C. Jensen, professor emeritus, Harvard Business School