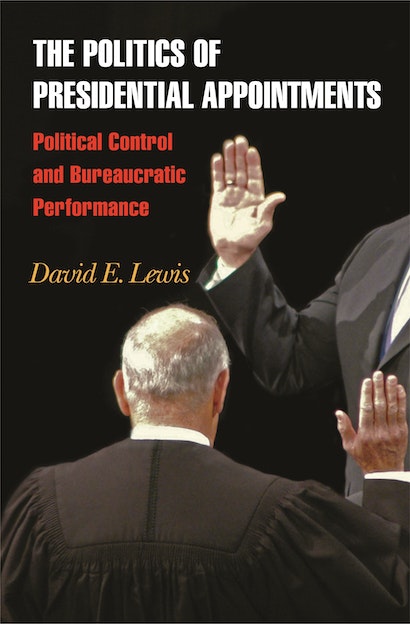 In the wake of Hurricane Katrina, many questioned whether the large number of political appointees in the Federal Emergency Management Agency contributed to the agency’s poor handling of the catastrophe, ultimately costing hundreds of lives and causing immeasurable pain and suffering. The Politics of Presidential Appointments examines in depth how and why presidents use political appointees and how their choices impact government performance — for better or worse.


One way presidents can influence the permanent bureaucracy is by filling key posts with people who are sympathetic to their policy goals. But if the president’s appointees lack competence and an agency fails in its mission — as with Katrina — the president is accused of employing his friends and allies to the detriment of the public. Through case studies and cutting-edge analysis, David Lewis takes a fascinating look at presidential appointments dating back to the 1960s to learn which jobs went to appointees, which agencies were more likely to have appointees, how the use of appointees varied by administration, and how it affected agency performance. He argues that presidents politicize even when it hurts performance — and often with support from Congress — because they need agencies to be responsive to presidential direction. He shows how agency missions and personnel — and whether they line up with the president’s vision — determine which agencies presidents target with appointees, and he sheds new light on the important role patronage plays in appointment decisions.

David E. Lewis is assistant professor of politics and public affairs at Princeton University. He is the author of Presidents and the Politics of Agency Design.

"[Lewis] delves into an assessment of the pros and cons of the process through a systematic and balanced examination of the available evidence. The result is impressive: a careful, nuanced, and thoughtful analysis of a major part of government that few citizens know much about. Lewis reminds us that the tension between competent and loyal government employees is nearly as old as the United States itself."—Karen Hult, Democracy Journal

"This book is a major scholarly advance for understanding both the conditions under which presidents choose to politicize the bureaucracy and their choices' ramifications for effective government."—M.E. Bailey, Choice

"Lewis's work contributes to a growing literature on the relationship of the bureaucracy to the rest of the political system. . . . The most valuable contribution of The Politics of Presidential Appointments, however, is its description of the Byzantine system of presidential appointments and the clarity with which it presents the trade-offs between presidential control and bureaucratic competence."—Patrick Roberts, Presidential Studies Quarterly

"This is certainly the best book on appointments so far, and one that will come to define how we write books on the presidency that attempt to meld theory and evidence. . . . The Politics of Presidential Appointments will provide the starting point, and rightfully so."—Andrew B. Whitford, Perspectives on Politics

"Every now and again, a book comes along that challenges not only what you think about a topic, but how you and everyone else you know go about studying it. David Lewis's latest offering is exactly such a book. . . . This book . . . represents a genuinely new age of empirical work on the executive branch, and it sets the standard by which all future work on the topic will be measured."—William Howell, Political Science Quarterly

"In this impressive new book, David Lewis tells us why presidents often—but not always—rely on political appointees to staff bureaucracies. With its mixture of insightful theory, careful statistical tests, and a deep understanding of how bureaucracies work, this book represents the scientific study of bureaucracy at its finest."—Charles Shipan, coauthor of Deliberate Discretion?

"Political science is sadly currently producing few scholars concerned with improving the management of the federal government. David Lewis is a striking exception. This well-argued, methodologically rigorous study of the baleful impact of the increasing number of political appointees in agencies on government performance makes an important contribution both to the academic literature and to an important practical debate about governance."—Steve Kelman, Harvard University

"This book is an important contribution to our understanding of how power works in the executive branch of government. Lewis is careful in his arguments, precise with his data, and logical in his presentation. He has collected and analyzed impressive evidence to explain the techniques of politicization and their consequences. This book is the most complete analysis of presidential personnel policy available."—James P. Pfiffner, George Mason University

"This is a remarkable work. Lewis challenges some of the basic assumptions that have been made in past research on this subject. He demonstrates that the increase in politicization occurred until 1980 and then flattened out. Lewis finds that while politicization continues, it is not trending upward as past research suggests. All presidents do not have the same incentives when it comes to politicizing the bureaucracy."—Richard W. Waterman, University of Kentucky