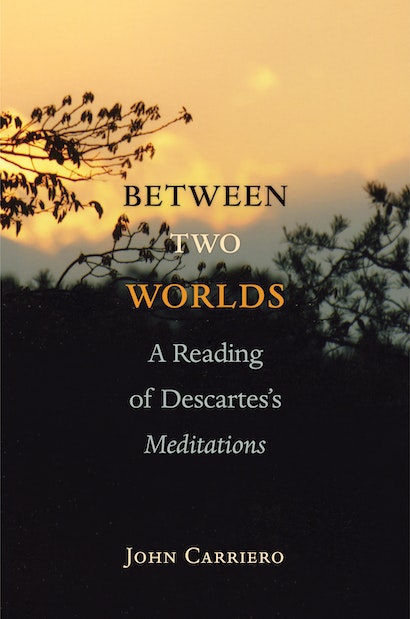 Between Two Worlds is an authoritative commentary on — and powerful reinterpretation of — the founding work of modern philosophy, Descartes’s Meditations. Philosophers have tended to read Descartes’s seminal work in an occasional way, examining its treatment of individual topics while ignoring other parts of the text. In contrast, John Carriero provides a sustained, systematic reading of the whole text, giving a detailed account of the positions against which Descartes was reacting, and revealing anew the unity, meaning, and originality of the Meditations.


Carriero finds in the Meditations a nearly continuous argument against Thomistic Aristotelian ways of thinking about cognition, and shows more clearly than ever before how Descartes bridged the old world of scholasticism and the new one of mechanistic naturalism. Rather than casting Descartes’s project primarily in terms of skepticism, knowledge, and certainty, Carriero focuses on fundamental disagreements between Descartes and the scholastics over the nature of understanding, the relation between the senses and the intellect, the nature of the human being, and how and to what extent God is cognized by human beings. Against this background, Carriero shows, Descartes developed his own conceptions of mind, body, and the relation between them, creating a coherent, philosophically rich project in the Meditations and setting the agenda for a century of rationalist metaphysics.

John Carriero is professor of philosophy at the University of California, Los Angeles, and coeditor of A Companion to Descartes.

"Between Two Worlds displays a very strong and textually based reading. It would have enormous value to those with a serious interest in understanding Descartes."—Michael Pereira, Metapsychology.net

"Carriero offers a powerful and controversial explanation. . . . Because of its systematic ability to deepen our understanding of every aspect of the Meditations, Between Two Worlds sets the standard for interpretations of the Meditations for the foreseeable future."—Michael Della Rocca, Notre Dame Philosophical Reviews

"Like the best philosophical writing, Carriero's book constantly stimulates reflections that take us beyond the minutiae of textual interpretation to wider philosophical (and indeed theological) issues. This is not to say that the work is lacking in scholarly detail; on the contrary, it is marked from first to last by the most meticulous attention to the text. . . . [Carriero] creates for the reader a delightful sense of being alone with Descartes as he wrestles with Aquinas—a contest of champions, beautifully described."—John Cottingham, Mind

"Between Two Worlds is a real achievement: a wonderful combination of philosophical insight and close textual analysis; from now on an essential vade mecum for any serious reader of the Meditations."—RogerWoolhouse, European Legacy

"Between Two Worlds makes a significant contribution to the literature on Descartes's Meditations. It is likely to become a standard reference for Anglophone philosophers, and it is certain to be widely read and discussed."—Dennis Des Chene, Washington University in St. Louis

"John Carriero offers the most detailed and probing comparison of Descartes's arguments with those of his most famous and influential scholastic predecessor, Thomas Aquinas. The great advantage of this strategy is that it gives a clear and unified picture of how Descartes positions himself between scholastic Aristotelianism and the new mechanistic naturalism. This is an original and powerful reading of the Meditations and a worthy successor to Margaret Wilson's classic Descartes."—Lilli Alanen, author of Descartes's Concept of Mind