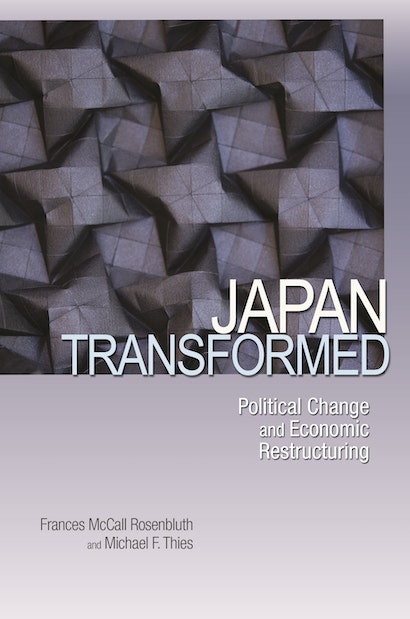 With little domestic fanfare and even less attention internationally, Japan has been reinventing itself since the 1990s, dramatically changing its political economy, from one managed by regulations to one with a neoliberal orientation. Rebuilding from the economic misfortunes of its recent past, the country retains a formidable economy and its political system is healthier than at any time in its history. Japan Transformed explores the historical, political, and economic forces that led to the country’s recent evolution, and looks at the consequences for Japan’s citizens and global neighbors.


The book examines Japanese history, illustrating the country’s multiple transformations over the centuries, and then focuses on the critical and inexorable advance of economic globalization. It describes how global economic integration and urbanization destabilized Japan’s postwar policy coalition, undercut the ruling Liberal Democratic Party’s ability to buy votes, and paved the way for new electoral rules that emphasized competing visions of the public good. In contrast to the previous system that pitted candidates from the same party against each other, the new rules tether policymaking to the vast swath of voters in the middle of the political spectrum. Regardless of ruling party, Japan’s politics, economics, and foreign policy are on a neoliberal path.

Japan Transformed combines broad context and comparative analysis to provide an accurate understanding of Japan’s past, present, and future.

Frances McCall Rosenbluth is the Damon Wells Professor of International Politics at Yale University. Michael F. Thies is associate professor of political science at the University of California, Los Angeles.

"Rosenbluth and Thies offer a provocative critique of Japan's political economy, claiming that electoral changes in 1994 marked a pivotal reform equal to that of the 1868 Meiji Restoration."—Choice

"[T]his well-written, short book will be excellent for undergraduate and graduate courses focused on Japan, political economy and institutional change. Japan Transformed is sure to spark debate in the scholarly community about the weight which should be placed on electoral systems or electoral system change as explanations."—Daniel P. Aldrich, Journal of Contemporary Asia

"Japan Transformed brings together history, culture, politics, and economics to illuminate the major developments of postwar politics in a way that will appeal to Japan specialists as well as broader audiences. . . . Rosenbluth and Thies's book makes a significant contribution to the literature on Japan's political economy. The great strength of this work is how much it covers in so few pages."—Alisa Gaunder, Journal of Japanese Studies

"The book's strength is its clear but controversial argument regarding the causal influence of electoral systems on policy outcomes, making it valuable to scholars interested in Japanese politics and a stimulating text for advanced comparative politics courses."—Kenneth Mori McElwain, Perspectives on Politics

"Japan Transformed offers a crisply written and insightful analysis of Japan's most recent 'Meiji moment'—the 1994 electoral reforms. As did the earlier and more famous events of 1868, the 1994 reforms sparked profound and interrelated changes, opening both the economy and politics to new competitive forces and incentives. Rosenbluth and Thies provide the most comprehensive analysis to date of these epochal changes, one which will command attention from all those interested in the interplay between electoral incentives and economic outcomes."—Gary Cox, University of California, San Diego

"Amidst the gloom and doom of Japan's aging society and sputtering economy, Rosenbluth and Thies infuse a breath of hope: the transformation of the electoral system is pushing Japan steadily toward a responsible system of majoritarian governance privileging mainstream urban voters over entrenched interest groups and part-time farmers. The importance of the electoral system is not new to studies of Japanese politics, but never has it received such bold and ambitious treatment. Concise yet broad-ranging, Japan Transformed will become required reading for beginner and specialist alike."—Gregory W. Noble, University of Tokyo

"This book fills a niche on Japan's political economy. It weaves together comparative politics, political economy, and area studies to produce an interesting and accessible account of the changes Japan has experienced over the last twenty years."—Margarita Estévez-Abe, Syracuse University

"This book offers a new definitive statement of the rational institutionalist take on Japanese politics. Its main claims are carefully presented with appropriate qualifications and nuance, while its most provocative claim—that significant change in Japanese policy has been driven by electoral reforms adopted in the 1990s—will provoke discussion and debate."—Leonard Schoppa, University of Virginia