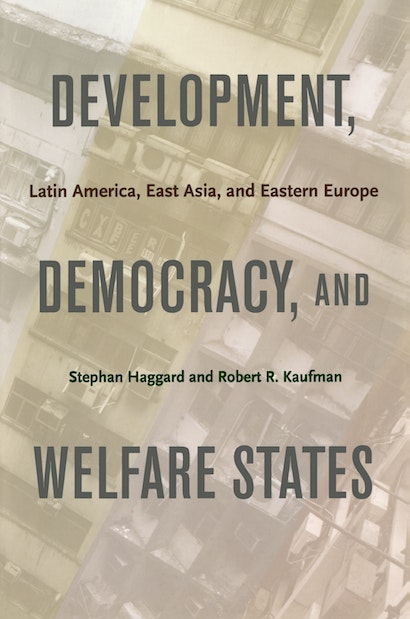 This is the first book to compare the distinctive welfare states of Latin America, East Asia, and Eastern Europe. Stephan Haggard and Robert Kaufman trace the historical origins of social policy in these regions to crucial political changes in the mid-twentieth century, and show how the legacies of these early choices are influencing welfare reform following democratization and globalization.


Haggard and Kaufman compare the different welfare paths of the countries in these regions following democratization and the move toward more open economies. Although these transformations generated pressure to reform existing welfare systems, economic performance and welfare legacies exerted a more profound influence. The authors show how exclusionary welfare systems and economic crisis in Latin America created incentives to adopt liberal social-policy reforms, while social entitlements from the communist era limited the scope of liberal reforms in the new democracies of Eastern Europe. In East Asia, high growth and permissive fiscal conditions provided opportunities to broaden social entitlements in the new democracies.


This book highlights the importance of placing the contemporary effects of democratization and globalization into a broader historical context.

Stephan Haggard is the Lawrence and Sallye Krause Professor of Korea-Pacific Studies at the University of California, San Diego. Robert R. Kaufman is professor of political science at Rutgers University.

"In this new work, the authors make another major contribution to the field of comparative political economy by examining in a thorough manner the various factors that influence the different trajectories of social policy (primarily the development and reform of welfare policies) in middle-income countries of Latin America, East Asia, and Eastern Europe. . . . This will be an important and widely cited work in the field."—Choice

"The in-depth comparative investigation into the welfare states in developing and former-communist countries provided in Development, Democracy, and Welfare States is unprecedented. This book will likely be the point of departure for most future work on welfare states in any of these regions. . . . The conclusion of the book, in addition to presenting the significant findings of this initial investigation, could be read as a research agenda for students of welfare-state (re)formation in Latin America, East Asia, and Eastern Europe."—Kristin Nickel Makszin, Czech Sociological Review

"[T]he first of its kind and one that opens new paths. . . . The main strength of the book is . . . its very articulate comparative historical analysis covering a range of policy issues and countries. The book is already a must-read and excellent contribution to the field."—Emre Uckardesler, International Review of Modern Sociology

"Development, Democracy, and Welfare States transforms the comparative study of welfare states or regimes outside of the advanced industrial countries. . . . [I]t goes much further than its predecessors in integrating a detailed and original analysis of cross-national statistical data into an excellent synthesis of existing literature. . . . Development, Democracy, and Welfare States makes an enormous contribution to the field of comparative political economy."—Jeremy Seekings, Perspectives on Politics

"This book, written by a leading partnership of political scientists, is a milestone of synthesis, a valuable source of data, and a model for macro-comparative history."—Jeremy Adelman, International History Review

"[T]his book is insightful and will be influential in the annals of comparative political economy. . . . For students of comparative welfare states, this book is a must-read because Haggard and Kaufman have set a high standard for further comparative inquiry."—Yun Fan, Taiwan Journal of Democracy

"Haggard and Kaufman's work is praiseworthy for its painstaking execution of an empirically robust comparative project aimed at pattern identification—an endeavor crucial for analyzing the three regions once regarded as fundamentally distinct. . . . This book is insightful and will be influential in the annals of comparative political economy. . . . For students of comparative welfare states, this book is a must-read because Haggard and Kaufman have set a high standard for further comparative inquiry."—Yun Fan, Journal of Democracy

"[T]he book truly excels in constructing a new, parsimonious, and concise middle-range theory of the political economy of the welfare state in the emerging markets through a broad comparison that successfully narrows the range of explanatory variables. It also presents a convincing counterargument against dire predictions of a 'neo-liberal' revolution and massive rollbacks of the key social programs in the new democracies. Without a doubt the book makes an outstanding contribution to literature that will benefit student, and scholars of both comparative social policy and eastern Europe for many years to come."—Tomasz Inglot, Slavic Review

"There is lot to like about this book. The scope of it alone is impressive. In almost 450 fact-packed pages, including a reference list of almost 50 pages, as well as six Appendix-sections of method and illustrative graphs, Stephan Haggard and Robert R. Kaufman take the reader on a journey of social policy in a wide range of countries in Latin America, East Asia and Eastern Europe. This fact alone could very well make this the text-book on the particular subject matter."—Daniel Ankarloo, East Asia Quarterly

"While many authors cannot see beyond the borders of their own country, Haggard and Kaufman masterfully compare Latin America, East Asia, and East Europe from a global perspective. These two great scholars analyze urgent contemporary problems, the status and future fate of the welfare state, and the relationship of changes with the creation and development of democracy with remarkable expertise, precision, and human empathy."—János Kornai, professor emeritus, Harvard University and Collegium Budapest

"This ambitious book extends the theoretical framework of the literature on welfare states in the advanced capitalist countries, and situates the experience of these countries in a broader comparative context. Haggard and Kaufman bring out the multifaceted implications of development models and regime types for social policy. Their synthetic account is truly a tour de force and a testimony to the fruitfulness of cross-regional comparison."—Jonas Pontusson, Princeton University

"A masterly analysis of how political interests, economic circumstances, development strategies, and local history have shaped what are surprisingly different versions of the welfare state across the developing world. The authors combine fine-grained country analyses with intelligent use of data, and explain and extend the theory and literature on the modern welfare state. The book is both scholarly and readable."—Nancy Birdsall, president of the Center for Global Development

"This book has no equal in the welfare-state literature, a truly impressive achievement. Haggard and Kaufman combine meticulous scholarship with sophisticated theoretical guidance in this study of welfare state evolution in Latin America, Asia, and East Europe. The book not only fills a huge void in our knowledge, it also compels us to seriously rethink prevailing theory."—Gøsta Esping-Andersen, Universitat Pompeu Fabra, Barcelona

"A very, very valuable book. Haggard and Kaufman are up to their old tricks—helping establish a new line of investigation in a desperately understudied field. This book will be widely read, heavily cited, and will inspire a generation of research. It is going to have an important impact in comparative politics and beyond."—Erik Wibbels, Duke University

"A major undertaking that will make a significant contribution to the scholarship on welfare states in political science and sociology. This ambitious book provides a wealth of information on twenty-one countries' social welfare trajectories from the end of World War II to the present. Haggard and Kaufman provide quantitative analysis of trends with detailed country histories, which makes for an empirically rich account."—Nina Bandelj, University of California, Irvine