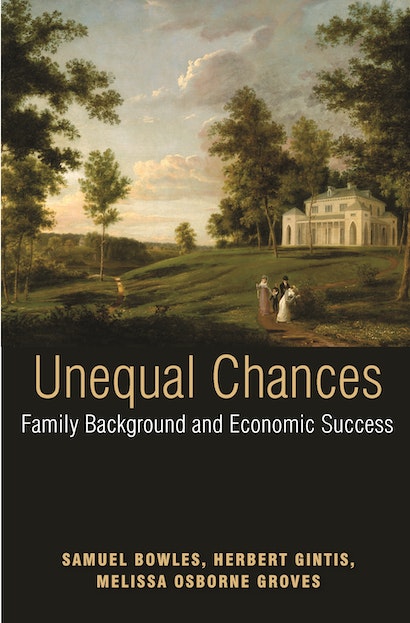 Is the United States “the land of equal opportunity” or is the playing field tilted in favor of those whose parents are wealthy, well educated, and white? If family background is important in getting ahead, why? And if the processes that transmit economic status from parent to child are unfair, could public policy address the problem? Unequal Chances provides new answers to these questions by leading economists, sociologists, biologists, behavioral geneticists, and philosophers.


New estimates show that intergenerational inequality in the United States is far greater than was previously thought. Moreover, while the inheritance of wealth and the better schooling typically enjoyed by the children of the well-to-do contribute to this process, these two standard explanations fail to explain the extent of intergenerational status transmission. The genetic inheritance of IQ is even less important. Instead, parent-offspring similarities in personality and behavior may play an important role. Race contributes to the process, and the intergenerational mobility patterns of African Americans and European Americans differ substantially.

"An impressive book. . . . [T]he book includes a heavy dose of philosophy about social justice and what part the family plays in creating, sustaining, or advancing economic advantage, to the loss and gain of other families."—Larry Nackerud, Journal of Sociology and Social Welfare

"In analyzing the persistence of economic inequality between generations, the authors of this book make major advances. They add to the literature demonstrating that this persistence is much stronger than has often been supposed, and they further challenge the conventional wisdom in emphasising the importance of the intergenerational transmission of noncognitive attributes."—John Goldthorpe, University of Oxford

"America believes that we both have adequate social mobility and that it reflects a social Darwinism of just rewards. This powerful collection punctures both assumptions. Forty years after John Kennedy courageously pointed to the unfair inheritance of both wealth and poverty in America, this rigorous analysis demonstrates that parents' wealth, race, and schooling are ever more determinant of life chances. We can only hope that moral and policy judgments will be informed and inspired by this work."—Anthony Marx, president of Amherst College

"This book takes a first cut at bringing together the many pieces of the complex puzzle of economic opportunity in market societies. This is a very important topic, and the book reaches into several disciplines to gain perspective. It is well timed, well conceived, and well executed; it makes for a great read. In addition, many of the pieces draw on multiple data sources to gain a broader picture. This makes the contributions, both individually and collectively, not only excellent pieces of scholarship but different from the normal journal fare."—Martina Morris, University of Washington, coauthor of Divergent Paths

"A consensus has emerged of late that the correlation between economic origins and destinations is higher than scholars used to think it was—maybe more than twice as high. The scholars contributing to this volume did the research that forged the new consensus. Bringing their work together in a systematic way is a service to the research community and the public. "—Michael Hout, University of California, Berkeley, coauthor of Inequality by Design: Cracking the Bell Curve Myth