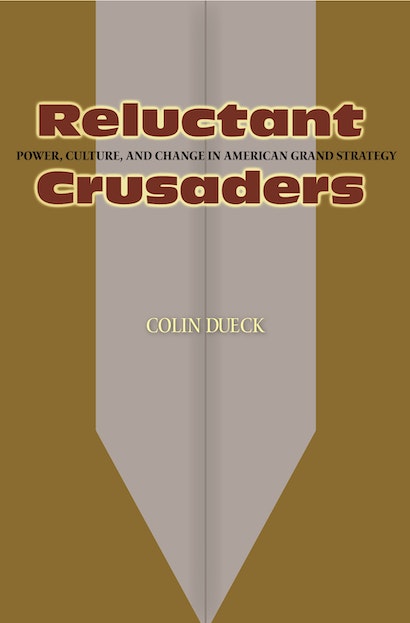 In Reluctant Crusaders, Colin Dueck examines patterns of change and continuity in American foreign policy strategy by looking at four major turning points: the periods following World War I, World War II, the Cold War, and the 9/11 terrorist attacks. He shows how American cultural assumptions regarding liberal foreign policy goals, together with international pressures, have acted to push and pull U.S. policy in competing directions over time. The result is a book that combines an appreciation for the role of both power and culture in international affairs.


The centerpiece of Dueck’s book is his discussion of America’s “grand strategy” — the identification and promotion of national goals overseas in the face of limited resources and potential resistance. One of the common criticisms of the Bush administration’s grand strategy is that it has turned its back on a long-standing tradition of liberal internationalism in foreign affairs. But Dueck argues that these criticisms misinterpret America’s liberal internationalist tradition. In reality, Bush’s grand strategy since 9/11 has been heavily influenced by traditional American foreign policy assumptions.


While liberal internationalists argue that the United States should promote an international system characterized by democratic governments and open markets, Dueck contends, these same internationalists tend to define American interests in broad, expansive, and idealistic terms, without always admitting the necessary costs and risks of such a grand vision. The outcome is often sweeping goals, pursued by disproportionately limited means.

Colin Dueck is professor in the Department of Public and International Affairs at George Mason University. He studied politics at Princeton University, and international relations at Oxford under a Rhodes scholarship.

"Realists have long lamented the periodic tendency of the United States to embark upon ideological crusades abroad. Dueck's Reluctant Crusaders goes some way in providing a causal explanation for such anomalous, and at times, self-defeating, strategic behavior."—Jeffrey W. Taliaferro, Perspectives on Politics

"Colin Dueck's Reluctant Crusaders is a well-researched, cogently argued explanation of how America's internal political characteristics have shaped its strategy toward the world...[It] is a welcome starting point for understanding how America's history and beliefs have enforced a surprising continuity in U.S. foreign policy, even as international threats and conditions have changed dramatically."—Todd R. Lowery, Claremont Review of Books

"This book poses an interesting and enduringly relevant question, and sets out to answer it in an engaging way. It is lean, extremely well written, and well-researched."—David Welch, University of Toronto