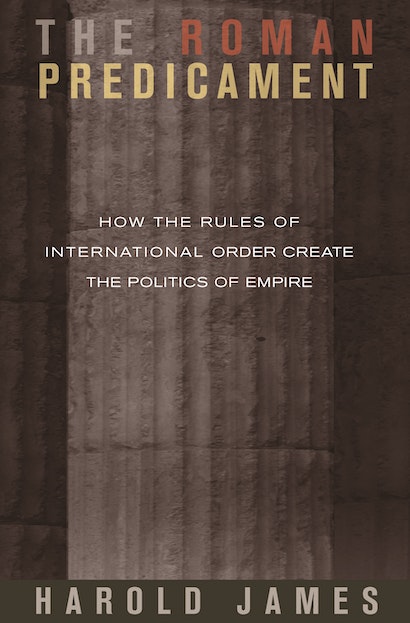 Modern America owes the Roman Empire for more than gladiator movies and the architecture of the nation’s Capitol. It can also thank the ancient republic for some helpful lessons in globalization. So argues economic historian Harold James in this masterful work of intellectual history.


The book addresses what James terms “the Roman dilemma” — the paradoxical notion that while global society depends on a system of rules for building peace and prosperity, this system inevitably leads to domestic clashes, international rivalry, and even wars. As it did in ancient Rome, James argues, a rule-based world order eventually subverts and destroys itself, creating the need for imperial action. The result is a continuous fluctuation between pacification and the breakdown of domestic order.


James summons this argument, first put forth more than two centuries ago in Adam Smith’s Wealth of Nations and Edward Gibbon’s Decline and Fall of the Roman Empire, to put current events into perspective. The world now finds itself staggering between a set of internationally negotiated trading rules and exchange — rate regimes, and the enforcement practiced by a sometimes-imperial America. These two forces — liberal international order and empire — will one day feed on each other to create a shakeup in global relations, James predicts. To reinforce his point, he invokes the familiar bon mot once applied to the British Empire: “When Britain could not rule the waves, it waived the rules.”
?


Despite the pessimistic prognostications of Smith and Gibbon, who saw no way out of this dilemma, James ends his book on a less depressing note. He includes a chapter on one possible way in which the world could resolve the Roman Predicament — by opting for a global system based on values as opposed to rules.

Harold James is Professor of History and International Affairs at Princeton University. His books include A German Identity, International Monetary Cooperation since Bretton Woods, and The End of Globalization: Lessons from the Great Depression.

"Starting from an analogy with Rome, James describes the mounting domestic tensions that increasingly threaten the global system and an interconnected world. . . . The greater challenge to the international order may lie in the tensions within, rather than between, states, as James suggests. . . . Like Rome . . . the American-led global order faces problems created primarily by its own internal dynamics. What James calls the 'Roman dilemma' arises from the fact that the way in which peaceful commerce produces a stable, prosperous and integrated global order also creates undercurrents of conflict. A vicious circle thus leads the liberal, commercial world order to subvert and destroy itself."—William Anthony Hay, The National Interest

"There have been rather too many books recently seeking lessons and analogies from imperial history in order to comprehend the contemporary global order and assess its viability.... [The Roman Predicament] is ... far better than most because Harold James brings to it a rare combination of insight into both the history of global finance and trade and the history of modern Europe."—Dominic Lieven, American Historical Review

"If only we did teach and learn from history, Harold James's outstanding . . . book would be at the center of our current political campaign, because we are faced with the Roman Predicament of which he writes."—BrothersJudd.com

"In today's public debate, historical analogies usually come cheap. In Harold James's hands, historical parallels and themes are marshalled with wisdom and insight—judiciously connected without being overdrawn—and ultimately provide enlightenment. The Roman Predicament gives us the real lessons for today from the Roman and British empires while deflating the delusions of the neo-imperialists and their left-wing counterparts. Power, law, and wealth work in tandem to thrive, and James shows us how."—Adam Posen, Senior Fellow, Institute for International Economics