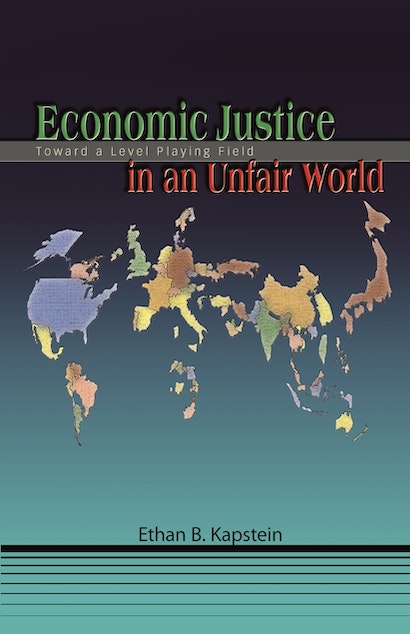 Recent years have seen a growing number of activists, scholars, and even policymakers claiming that the global economy is unfair and unjust, particularly to developing countries and the poor within them. But what would a fair or just global economy look like? Economic Justice in an Unfair World seeks to answer that question by presenting a bold and provocative argument that emphasizes economic relations among states.

The book provides a market-oriented focus, arguing that a just international economy would be one that is inclusive, participatory, and welfare-enhancing for all states. Rejecting radical redistribution schemes between rich and poor, Ethan Kapstein asserts that a politically feasible approach to international economic justice would emphasize free trade and limited flows of foreign assistance in order to help countries exercise their comparative advantage.

Kapstein also addresses justice in labor, migration, and investment, in each case defending an approach that concentrates on nation-states and their unique social compacts. Clearly written for all those with a stake in contemporary debates over poverty reduction and development, the book provides a breakthrough analysis of what the international community can reasonably do to build a global economy that works to the advantage of every nation.

Ethan B. Kapstein is the Paul Dubrule Professor of Sustainable Development, INSEAD, Fontainebleau, France; and a visiting fellow at the Center for Global Development, Washington, D.C. He is also a Senior Adviser to the Carnegie Council on Ethics and International Affairs, and, during 2003-2006, a Transatlantic Fellow of the German Marshall Fund of the United States.

"Anyone who wants an introduction to questions of moral economic philosophy would do well to start with his book. Kapstein writes in lucid prose, without the turgidity that often renders the subject as inviting as a cold bath. He makes a long-overdue challenge to the West's consensus that the aim of aid and of developing countries' own development efforts should be to reduce poverty, and that this reduction should be achieved not via industrialization and economic growth but by policies focused on poverty."—Robert H. Wade, Foreign Affairs

"[This] is a stimulating, well-researched book combining economic analysis, political philosophy, and contemporary policy. . . . It [has] an ambitious theme and the author pursues it with originality."—Richard Jolly, Ethics and International Affairs

"As Economic Justice in an Unfair World is perhaps the only truly complete philosophical treaty on economic justice that has come out of academia in the last twenty years, this book simultaneously marks the rebirth of ethics as a field of relevance and injects long overdue academic rigour into the often emotionally driven overly populist debate about globalization. . . . [A] real must-read for anyone interested in the frontiers of economics and philosophy."—Business & Finance

"Economic Justice is an important contribution to the debates on how to level the playing field in international relations."—PsycCRITIQUES

"A clear, accessible, and first-rate contribution to the debates surrounding fairness in the global economy and ethics in international affairs."—Michael Barnett, University of Minnesota

"The globalizing economy is offering exciting opportunities to some, but that is little comfort to the millions who are sinking ever deeper into poverty. What should the wealthy world do? Ethan Kapstein offers an answer that combines a powerful critique of ideas about international justice and a hard-headed alternative solution."—Ngaire Woods, Oxford University

"For many years the development community has been making the humanitarian case for increases in foreign aid and for public policies that target global poverty reduction. Now in this important book, Ethan Kapstein demonstrates that these measures are also in the self-interest of the world's most powerful nations. In charting a politically feasible course toward a fairer world economy, Kapstein demonstrates that a better future is within our grasp. This is must reading for all those concerned with economic development and international economic relations."—Nancy Birdsall, President, Center for Global Development