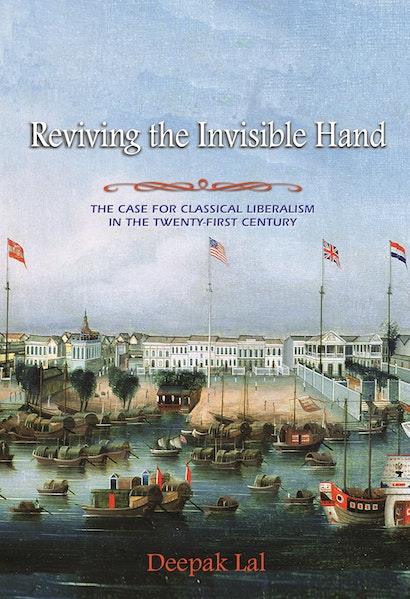 Reviving the Invisible Hand is an uncompromising call for a global return to a classical liberal economic order, free of interference from governments and international organizations. Arguing for a revival of the invisible hand of free international trade and global capital, eminent economist Deepak Lal vigorously defends the view that statist attempts to ameliorate the impact of markets threaten global economic progress and stability. And in an unusual move, he not only defends globalization economically, but also answers the cultural and moral objections of antiglobalizers.


Lal bases his case on a historical account of the rise of capitalism and globalization in the first two liberal international economic orders: the nineteenth-century British, and the post-World War II American.


Arguing that the “new dirigisme” is the thin edge of a wedge that could return the world to excessive economic intervention by states and international organizations, Lal does not shrink from controversial stands such as advocating the abolishment of these organizations and defending the existence of child labor in the Third World.

Deepak Lal is James S. Coleman Professor of International Development Studies at the University of California, Los Angeles, professor emeritus of political economy at University College London, and former Research Administrator at the World Bank. He has advised many governments and international agencies and is the author of numerous books on economic development and public policy, including In Praise of Empires (Palgrave Macmillan), The Poverty of Development Economics, and Unintended Consequences. In 2007, he received the International Freedom Award for Economy from the Società Liberia.

"Deepak Lal has provided us with a stirring, even vehement, argument for the restoration of classical liberalism."—Tim Worstall, Daily Telegraph

"If Deepak Lal did not exist, I have no doubt it would be necessary to invent him. A highly accomplished technical economist with an excellent reputation, Lal is also the most formidable and forthright champion of classical liberal economic thinking."—David Smith, World Business

"Deepak Lal gives us a fiery refresher course not just in the virtues of the free market, but on the classical liberal outlook on life."—George Walden, Sunday Telegraph

"Lal covers an immense amount of ground, from the theory of international trade to the differences between Michael Oakeshott's conservative opposition to the 'enterprise state' and that of the classical liberal Friedrich Hayek."—Samuel Brittan, Financial Times

"Deepak Lal effectively points out that just about every goal held dear by those who call themselves radicals and progressives is best reached by exactly the opposite policy prescriptions that they put forward. Indeed, we can go further and point out that the best methods of reaching those goals are in fact the truly liberal ones, those laid out all those decades ago by Adam Smith, David Hume and David Ricardo. . . . [T]his book can and should be a rallying point for those of us who are indeed liberal, radical and progressive."—Tim Worstall, Technology Commerce Society Daily

"This book gives a coherent and lucid account of classical liberal theory and argues a case for reviving the invisible hand. Lal's stands on 'trickle down' effect, relevance of the IMF, World Bank and the WTO, genetically modified food and government interventions to achieve equity are contentious. I hope this book generates informed public debates on these issues."—U. Sankar, The Hindu

"An erudite and spirited defense of the only approach to public policy that has brought mankind sustained economic growth, widespread alleviation of poverty, and embedded respect for the worth and dignity of the individual."—Economic Affairs

"A wide ranging and spirited defense of classical liberalism as an organizing principle for the economic affairs of the world.... Provides a nice blend of personal anecdote, literature review, economic argumentation, and broad empirical evidence."—Douglas Irwin, Journal of Economic Literature

"Deepak Lal's Reviving the Invisible Hand, an uncompromising and insightful defense of the classical-liberal case for laissez-faire capitalism and free trade that should be on every liberal's shelf. It begins with a brief history of capitalism, explains its fundamental principles, examines the threats it faces, and proposes ways in which the threats may be met intellectually and politically. Capitalism's great enemy, socialism, is thought by many to be dead, but as Lal shows, dirigisme is alive and well. The book is crammed with facts, broad-brush accounts, nuanced technical arguments, brutal critiques, and bold prophecies. Themes are interwoven and repeated. The author apparently aimed to stamp out every misconception about capitalism . . . in a single book. This . . . offers the reader an encyclopedic amount of material within a medium size volume."—Suri Ratnapala, Independent Institute

"This is a thoughtful, well-researched and challenging book. It has a deep historical perspective and offers a broad coverage of the continuing battles between regulation and deregulation, free and managed trade, and between liberty and equality."—Adrian Davies, Long-Range Planning

"[E]ntertaining to read. . . . Anyone seeking relief from the smarmier-thall-thou politics of our day will find this an agreeably provocative book."—George Walden, Seven

"What would Adam Smith and David Hume have had to say about globalization, human rights, outsourcing and free trade, capital controls, the WTO, the IMF and the World Bank, Islamic fundamentalism, the rise of China and India, the environment, the welfare state, U.S. foreign policy, and every other major issue if they were alive today? The closest you can ever come to finding out is to read this brilliant and provocative book by the last, but by no means the least, of the classical liberals, Deepak Lal."—Ronald E. Findlay, Columbia University

"This splendidly and subtly argued defense of the classical liberal position makes a highly valuable contribution to the globalization debate."—Harold James, Princeton University, author of The End of Globalization

"Deepak Lal's Reviving the Invisible Hand is a brilliant account of modern economic theory and policy written from a rigorous classical liberal perspective. Lal shows a thorough knowledge of classical liberal theory and an enviable ability to apply it to any economy. Furthermore, he demonstrates that the greatest threat to world economic progress and stability comes not from old-fashioned socialism, but from the recent, fashionable modifications of the classical liberal model. It is remarkable that a technical economist should display such competence and originality in areas seemingly far removed from the diagrams and equations of orthodoxy. And his style is rigorous, well-paced, and just a little cheeky."—Norman Barry, University of Buckingham, England, author of Classical Liberalism in the Age of Post-Communism