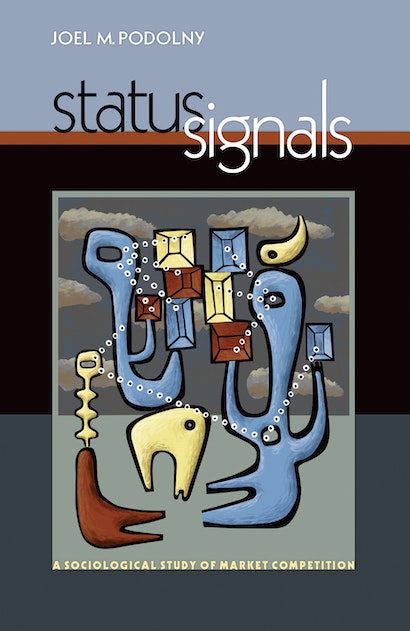 Why are elite jewelers reluctant to sell turquoise, despite strong demand? Why did leading investment bankers shun junk bonds for years, despite potential profits? Status Signals is the first major sociological examination of how concerns about status affect market competition. Starting from the basic premise that status pervades the ties producers form in the marketplace, Joel Podolny shows how anxieties about status influence whom a producer does (or does not) accept as a partner, the price a producer can charge, the ease with which a producer enters a market, how the producer’s inventions are received, and, ultimately, the market segments the producer can (and should) enter. To achieve desired status, firms must offer more than strong past performance and product quality — they must also send out and manage social and cultural signals.


Through detailed analyses of market competition across a broad array of industries — including investment banking, wine, semiconductors, shipping, and venture capital — Podolny demonstrates the pervasive impact of status. Along the way, he shows how corporate strategists, tempted by the profits of a market that would negatively affect their status, consider not only whether to enter the market but also whether they can alter the public’s perception of the market. Podolny also examines the different ways in which a firm can have status. Wal-Mart, for example, has low status among the rich as a place to shop, but high status among the rich as a place to invest.

Status Signals provides a systematic understanding of market dynamics that have — until now — not been fully appreciated.

Joel M. Podolny is dean and William S. Bienecke Professor of Management at the Yale School of Management. His articles have appeared in the American Journal of Sociology, American Sociological Review, and Administrative Science Quarterly.

"This is a terrific book, a must-read. It will undoubtedly wield tremendous influence on the development of economic sociology."—Ezra W. Zuckerman, Sloan School of Management, Massachusetts Institute of Technology

"This book will appeal not only to organizational and economic sociologists but also to scholars in areas such as social inequality and status attainment, as well as to micro and industrial organization economists. Podolny advances his arguments with great care, and tests them with painstaking precision. The value of his ideas, and the research they will inspire, make this a worthy contribution to a number of fields."—Mark Mizruchi, Professor of Sociology and Business Administration, University of Michigan, author of The Structure of Corporate Political Action