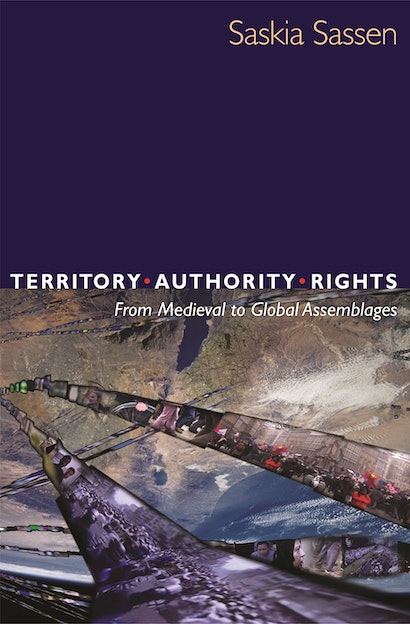 Where does the nation-state end and globalization begin? In Territory, Authority, Rights, one of the world’s leading authorities on globalization shows how the national state made today’s global era possible. Saskia Sassen argues that even while globalization is best understood as “denationalization,” it continues to be shaped, channeled, and enabled by institutions and networks originally developed with nations in mind, such as the rule of law and respect for private authority. This process of state making produced some of the capabilities enabling the global era. The difference is that these capabilities have become part of new organizing logics: actors other than nation-states deploy them for new purposes. Sassen builds her case by examining how three components of any society in any age — territory, authority, and rights — have changed in themselves and in their interrelationships across three major historical “assemblages”: the medieval, the national, and the global.


The book consists of three parts. The first, “Assembling the National,” traces the emergence of territoriality in the Middle Ages and considers monarchical divinity as a precursor to sovereign secular authority. The second part, “Disassembling the National,” analyzes economic, legal, technological, and political conditions and projects that are shaping new organizing logics. The third part, “Assemblages of a Global Digital Age,” examines particular intersections of the new digital technologies with territory, authority, and rights.


Sweeping in scope, rich in detail, and highly readable, Territory, Authority, Rights is a definitive new statement on globalization that will resonate throughout the social sciences.

Saskia Sassen is professor of sociology and a member of the Committee on Global Thought at Columbia University, and Centennial Visiting Professor at the London School of Economics and Political Science. She is the author of The Global City (Princeton), The Mobility of Labor and Capital, and Globalization and its Discontents, and coeditor of Digital Formations (Princeton). She has written for the New York Times, Financial Times, and International Herald Tribune.

"The book is a magisterial work of major theoretical importance and merits the close attention of scholars of global change in general and of globalization in particular. It illustrates the crucial role of historical analysis in making sense of contemporary socio-political phenomena."—Richard W. Mansbach, International History Review

"[Sassen] take[s] a broad view of territory, authority and rights from the middle ages to the era of globalization, to argue that this denationalization is itself influenced by what happened when the nation state was built. She believes the process of globalization is shaped, channeled and enabled by institutions and networks that were originally designed to build the nation state, including the rule of law and respect for private authority. Globalization builds on these institutions and networks and gives them a new direction."—Narendar Pani, Economic Times

"An erudite and spirited defense of the only approach to public policy that has brought mankind sustained economic growth, widespread alleviation of poverty, and embedded respect for the worth and dignity of the individual."—Economic Affairs

"[A] magisterial work of enormous scope and penetrating analysis. . . . [T]his work will stand as the leading exploration of the subject for many years."—Paul Kantor, Political Science Quarterly

"University of Chicago sociologist Sassen, a leading scholar of globalization, argues convincingly that while much 'denationalization' characterizes globalization, nation building and globalization are not oppositional. . . . This work makes a significant contribution to the globalization literature."—Choice

"One of Sassen's distinctive strengths is in studying in their full complexity the local sites of globalization, including financial centers like New York and London. . . . Sassen's work clearly reflects an understanding of the end of the globalization debate. She explains in detail how the activists often associated with 'antiglobalization' values or causes have themselves become effective global actors."—Robert Howse, Harvard Law Review

"Saskia Sassen's latest book is a significant advance in globalization studies. . . . In sum, the analytics that Sassen lays out provides away to explain and understand and explain transformation through a more complete, and complex, lens. It allows for—indeed, it demands—demands a closer look into the dynamics of change on a local scale."—Richard Gioioso, Journal of Regional Science

"Territory, Authority, Rights takes up pivotal sources of friction in a process of globalization too often seen as simple and inexorable. With clarity and insight Sassen shows how the meaning of each is reconfigured in contemporary social change. Her work is essential to making sense of practical problems as well as theoretical issues."—Craig Calhoun, Social Science Research Council

"Saskia Sassen is a spectacularly original thinker. She offers us not only new concepts, but often a new vocabulary. Her central insight in Territory, Authority, Rights, that understanding globalization actually requires focusing on the national-or more precisely, the phenomenon of 'denationalization' of many familiar domestic institutions and processes-opens the door to reimagining and retheorizing some of the most fundamental physical and political elements of our world."—Anne-Marie Slaughter, Princeton University

"In this brilliant and pioneering work, Saskia Sassen provides a whole new way of thinking about globalization and political development generally. This is a stunning achievement. One of the beauties of the book is its careful historical analysis that puts the globalizing present in the contexts of the past. However, not only is the message important, but also the author's way of illustrating the story in wonderful detail, so we are reading specifics as well as sweeping abstract ideas."—Yale H. Ferguson, Rutgers University, Newark

"Territory, Authority, Rights is a bold new work by the leading scholar of globalization. It will undoubtedly engage the author's many fans, renewing the conversation about globalization that Sassen has shaped in such substantial ways over the past twenty years. But far more than merely bringing her readers up to date with her thinking, the book also represents a major new theorization of globalization. Profoundly multidisciplinary, it will reach new audiences, and in the process redefine the issues, possibilities, and theoretical stakes in globalization. Sassen responds to globalization's critics from both right and left, carving out a distinctive analytical path with critical foundations of its own. The result is persuasive and compelling—a brilliant achievement that will define the research agenda with respect to globalization for years to come."—Alfred Aman, Indiana University School of Law