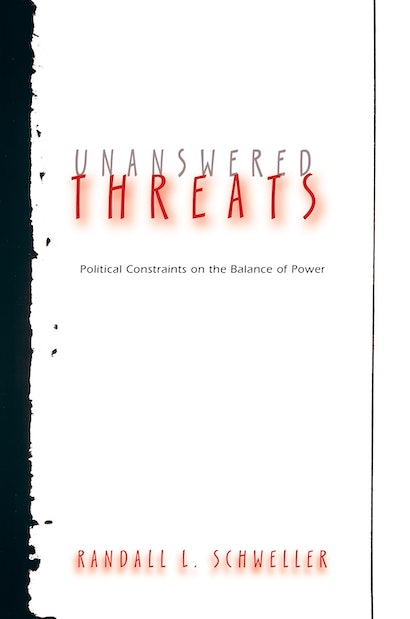 Why have states throughout history regularly underestimated dangers to their survival? Why have some states been able to mobilize their material resources effectively to balance against threats, while others have not been able to do so? The phenomenon of “underbalancing” is a common but woefully underexamined behavior in international politics. Underbalancing occurs when states fail to recognize dangerous threats, choose not to react to them, or respond in paltry and imprudent ways. It is a response that directly contradicts the core prediction of structural realism’s balance-of-power theory — that states motivated to survive as autonomous entities are coherent actors that, when confronted by dangerous threats, act to restore the disrupted balance by creating alliances or increasing their military capabilities, or, in some cases, a combination of both.


Consistent with the new wave of neoclassical realist research, Unanswered Threats offers a theory of underbalancing based on four domestic-level variables — elite consensus, elite cohesion, social cohesion, and regime/government vulnerability — that channel, mediate, and redirect policy responses to external pressures and incentives. The theory yields five causal schemes for underbalancing behavior, which are tested against the cases of interwar Britain and France, France from 1877 to 1913, and the War of the Triple Alliance (1864-1870) that pitted tiny Paraguay against Brazil, Argentina, and Uruguay.


Randall Schweller concludes that those most likely to underbalance are incoherent, fragmented states whose elites are constrained by political considerations.

"In this groundbreaking book, Schweller observes that history is in fact full of what he calls 'underbalancing'—the failure of states to form alliances or build arms in the face of threatening accumulations of power."—G. John Ikenberry, Foreign Affairs

"The book focuses largely on 'underbalancing', or on why certain types of states fail to employ balance-of-power strategies. The answer is domestic politics. . . . The book is a clear blend of realism and idealism. . . . A superb book worthy of a wide readership."—Charles F. Doran, International History Review

"Unanswered Threats is a most valuable addition to the field. . . . [Schweller] makes a giant leap forward by pairing variables that are reductive and idiosyncratic with well-constructed and empirically testable hypotheses of his own."—Ariel Ilan Roth, International Studies Review

"[An] insightful and elegantly written book. . . . [Unanswered Threats] is a formidable first cut on the salient topic of underbalancing."—Evan Resnick, Perspectives on Politics

"In the net, two interesting conclusions can be drawn from Schweller's excellent work. The first is that domestic uncertainties can doom the presumed outcomes of realism—in either hyper-aggression or hypo-assertion. The second is that if democratic states can control the logroll, they frequently behave distinctly and differently from other states. They can develop fellow feeling toward other nations that rises above mere short-term policy behavior. If this were not true, how does one explain the relative acceptance of America abroad at a time when so many foreigners decry the policies of the president?"—Richard Rosecrance, Political Science Quarterly