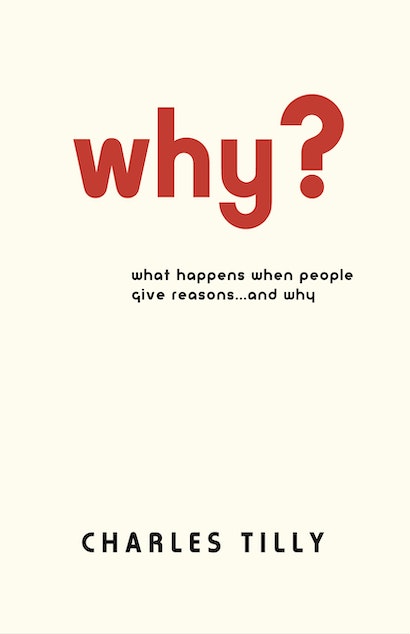 Why? is a book about the explanations we give and how we give them — a fascinating look at the way the reasons we offer every day are dictated by, and help constitute, social relationships. Written in an easy-to-read style by distinguished social historian Charles Tilly, the book explores the manner in which people claim, establish, negotiate, repair, rework, or terminate relations with others through the reasons they give.


Tilly examines a number of different types of reason giving. For example, he shows how an air traffic controller would explain the near miss of two aircraft in several different ways, depending upon the intended audience: for an acquaintance at a cocktail party, he might shrug it off by saying “This happens all the time,” or offer a chatty, colloquial rendition of what transpired; for a colleague at work, he would venture a longer, more technical explanation, and for a formal report for his division head he would provide an exhaustive, detailed account.


Tilly illustrates his topic by showing how a variety of people gave reasons for the 9/11 attacks. He also demonstrates how those who work with one sort of reason frequently convert it into another sort. For example, a doctor might understand an illness using the technical language of biochemistry, but explain it to his patient, who knows nothing of biochemistry, by using conventions and stories.


Replete with sparkling anecdotes about everyday social experiences (including the author’s own), Why? makes the case for stories as one of the great human inventions.

Charles Tilly (1929-2008) was the Joseph L. Buttenwieser Professor of Social Science at Columbia University. His work focused on large-scale social change and its relationship to contentious politics, especially in Europe, since 1500. His many books include The Politics of Collective Violence; Contention and Democracy in Europe, 1650-2000; Social Movements, 1768-2004; Economic and Political Contention in Comparative Perspective , coedited with Maria Kousis; Identities, Boundaries, and Social Ties; Trust and Rule; Regimes and Repertoires; Democracy; and Credit and Blame (Princeton).

"In the tradition of the legendary sociologist Erving Goffman, Tilly seeks to decode the structure of everyday social interaction, and the result is a book that forces readers to reexamine everything from the way they talk to their children to the way they argue about politics."—Malcolm Gladwell, New Yorker

"[A] persuasive book. . . . It is obvious that the cancer specialist talks differently to his colleagues from the way he talks to his patients: exactly what he might be doing in talking differently is Tilly's concern."—Adam Phillips, London Review of Books

"[Charles Tilly] argues convincingly that reason-giving always takes place in a social setting structured by the social relations of the persons in that setting. This [book is] eminently readable and interesting."—Leon H. Brody, Library Journal

"Tilly gives us . . . a good read, a book that calls our attention to a prevalent human phenomenon and raises the importance of investigating its nature. . . . The book also suggests that we sit down and begin to examine the nature of reason giving in our society—why we spend so much of our time doing it, what effect it has on our social relations, and . . . what effect it has on our own behavior and emotions."—Kurt Salzinger, PsycCritiques

"While Why? may be a frustrating read to the social scientist looking for methodological innovation, it is warmly recommended for anybody who is simply curious about the central role of reason giving."—Kristian Berg Harpviken, Journal of Peace Research

"Tilly's book is insightful, easily accessible to any audience and worth reading."—Richard Findler, European Legacy

"Readers will find this book stimulating, amusing, enlightening, and engaging. The veteran analyst of political conflict and change has shifted the scale and style of his analysis once again. The result is a tour de force."—Viviana Zelizer, Princeton University

"Impressive in scope and ambition, in the breadth of knowledge from which it draws, in its shrewd and careful use of Tilly's own experiences in public and scholarly life as well as in illness, in its acute observations in the materials it uses, and not least in the clear non-technical prose in which everything is presented."—Howard S. Becker, author of Tricks of the Trade