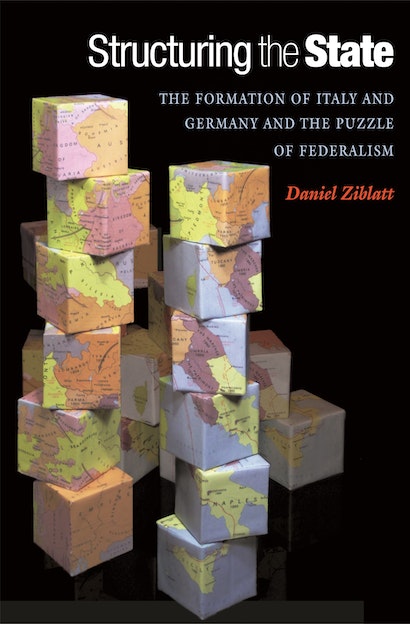 Germany’s and Italy’s belated national unifications continue to loom large in contemporary debates. Often regarded as Europe’s paradigmatic instances of failed modernization, the two countries form the basis of many of our most prized theories of social science. Structuring the State undertakes one of the first systematic comparisons of the two cases, putting the origins of these nation-states and the nature of European political development in new light.


Daniel Ziblatt begins his analysis with a striking puzzle: Upon national unification, why was Germany formed as a federal nation-state and Italy as a unitary nation-state? He traces the diplomatic maneuverings and high political drama of national unification in nineteenth-century Germany and Italy to refute the widely accepted notion that the two states’ structure stemmed exclusively from Machiavellian farsightedness on the part of militarily powerful political leaders. Instead, he demonstrates that Germany’s and Italy’s “founding fathers” were constrained by two very different pre-unification patterns of institutional development. In Germany, a legacy of well-developed sub-national institutions provided the key building blocks of federalism. In Italy, these institutions’ absence doomed federalism. This crucial difference in the organization of local power still shapes debates about federalism in Italy and Germany today. By exposing the source of this enduring contrast, Structuring the State offers a broader theory of federalism’s origins that will interest scholars and students of comparative politics, state-building, international relations, and European political history.

Daniel Ziblatt is associate professor of government and social studies at Harvard University, where he is also faculty associate at the Minda de Gunzburg Center for European Studies.

"Ziblatt brilliantly addresses . . . [an] institutional puzzle: Why, when Italy and Germany became nation-states, did Italy become a unitary state and Germany a federal one? Ziblatt is a careful and methodical researcher who applies to the study of historical processes a vast array of qualitative and sensible quantitative methods. . . . [A] bold and original analysis."—Stanley Hoffmann, Foreign Affairs

"A well-researched study of comparative political development from an institutional perspective. . . . The book contains useful notes and appendixes, and could be useful in history or political science courses."—Choice

"Ziblatt has put the question of the origins of federalism on the table, suggested a provocative answer to it, creatively applied the theory of infrastructural power, and pointed the way toward many new issues to explore. This is a piece of scholarship that is sure to become the touchstone for future research on the origins of federalism, and, if we are lucky, many other scholars will follow Ziblatt's lead in investigating the relationship between infrastructural and despotic power."—Monica Prasad, American Journal of Sociology

"There are several reasons to read this book. The first one is the originality of the subject. . . . The second reason to read this book is the theoretical implications of the cases under analysis. . . . The third reason is the fact that this research can be fruitfully replicated. . . . In any case, this book and the methodology used by the author will certainly constitute an extremely useful contribution."—Marco Brunazzo, Congrips Newsletter

"This is the most important book on state-building to appear in recent years. In addition to offering the definitive account of Italy's and Germany's creation, Ziblatt's work also sets the agenda for future scholarship on the comparative study of federalism. Rich narrative combined with theoretical sophistication bring new life to a very important set of debates about the origins of federalism and nation-states more broadly. This work should be read by specialists of Italian and German political development and comparative politics and by students of political institutions more broadly."—Sergio Fabbrini, Political Science, University of Trento, editor of Italian Journal of Political Science

"A work of the highest quality and significance, Structuring the State represents an original contribution to both political science and macrohistorical sociology for three reasons. First, it applies a variety of quantitative methods to the kind of comparative historical problem that is usually approached in an entirely qualitative way. Second, it overcomes the old division between society- and state-centered explanations for Italian and German unification by integrating them in a creative manner, while also pointing to other factors often overlooked in standard accounts. Finally, it challenges directly the dominant rational choice model of federalism by refuting the contention that politicians at the center are always power maximizers."—Thomas Ertman, New York University, author of Birth of the Leviathan: Building States and Regimes in Medieval and Early Modern Europe

"In Structuring the State, Daniel Ziblatt contends that previous scholarship in political science has overlooked a key determinant of state structure, namely the pre-existing administrative and institutional capacity in newly absorbed states. Well-organized, well written, and employing the most advanced methods of comparative-historical research in a sophisticated and clear fashion, the book moves forward with clarity and grace. Political scientists, sociologists, and historians working on the development of modern organizations—and indeed policy makers interested in building state capacity—will all learn from this timely volume."—Andrew C. Gould, University of Notre Dame, author of The Origins of Liberal Dominance: State, Church, and Party in Nineteenth-Century Europe