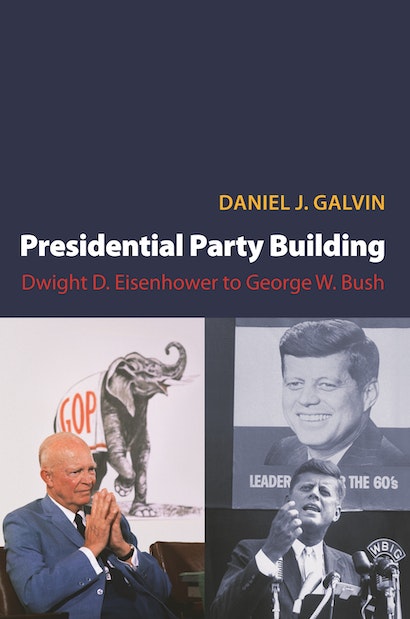 Modern presidents are usually depicted as party “predators” who neglect their parties, exploit them for personal advantage, or undercut their organizational capacities. Challenging this view, Presidential Party Building demonstrates that every Republican president since Dwight D. Eisenhower worked to build his party into a more durable political organization while every Democratic president refused to do the same. Yet whether they supported their party or stood in its way, each president contributed to the distinctive organizational trajectories taken by the two parties in the modern era.


Unearthing new archival evidence, Daniel Galvin reveals that Republican presidents responded to their party’s minority status by building its capacities to mobilize voters, recruit candidates, train activists, provide campaign services, and raise funds. From Eisenhower’s “Modern Republicanism” to Richard Nixon’s “New Majority” to George W. Bush’s hopes for a partisan realignment, Republican presidents saw party building as a means of forging a new political majority in their image. Though they usually met with little success, their efforts made important contributions to the GOP’s cumulative organizational development. Democratic presidents, in contrast, were primarily interested in exploiting the majority they inherited, not in building a new one. Until their majority disappeared during Bill Clinton’s presidency, Democratic presidents eschewed party building and expressed indifference to the long-term effects of their actions.

"Galvin's account of all this is disciplined and scholarly, with accordingly focused conclusions."—Charles Homans, Washington Monthly

"Conventional wisdom holds that US presidents make the most of the office by either focusing on reelection or building a personal legacy that historians will remember. Presidents are expected to be less interested in building their political parties. Galvin successfully challenges this simplification by demonstrating that Republican presidents since the New Deal consistently and energetically sought to strengthen the organizational capacity of the GOP, using the power of the office to further the goal of making the Republicans the new majority party. . . . The book is an important contribution to the literature on the presidency and offers a fine research design model for qualitative social scientists."—Choice

"In an exceptionally well-researched and beautifully written book, Daniel Galvin . . . fundamentally alters our understanding of presidents' contributions to the development of political parties. Presidential Party Building will likely become a classic in the field, both for its substantive contributions and for its conceptual and analytical innovations. . . . It will be tremendously illuminating for scholars of the presidency, party politics, American political development, and political organizations."—Jesse H. Rhodes, The Forum

"Students of presidential politics since 1960 will encounter important new findings in this book. Daniel Galvin's book explains in careful empirical detail the impact of post-1952 presidents upon their respective political parties. Galvin's method involves comparative case studies based on meticulous research of reliable sources. It is an impressive summary of the actual historical record of president-party interactions."—Steven E. Schier, Political Science Quarterly

"Presidential scholars are indebted to Galvin's seminal study not only for the new light it sheds on past presidential party building but also for the way it invites us to think afresh about the future of presidential party building. . . . Whatever the future may hold, however, there can be no doubt that Galvin has given us the finest empirical study yet of presidential-party relations in the latter half of the twentieth century."—Richard J. Ellis, Congress and the Presidency

"By comparing and contrasting Republican and Democratic presidents, and by crisply limiting the conceptualization of party-building to strengthening the party-as-organization, Galvin presents a startling contrast between the two parties and their presidents. . . . The spatial model and the convergence result of the median voter theorem naturally incline political scientists to assume that the major parties are inevitably organizationally symmetrical. They're not. Galvin conclusively shows that the assumption, while understandable, is false and has been false for many decades."—Richard M. Valelly, Election Law Journal

"Students of the presidency and the American party system will be grappling for years with this pathbreaking, exhaustively researched book. This is a model of the political scientist's craft, addressing an issue of major theoretical and practical significance with historical sensitivity and methodological care."—Steven M. Teles, author of The Rise of the Conservative Legal Movement

"Galvin provides a compelling reexamination of the relationship between the modern presidency and political parties. He upends the conventional wisdom that modern presidents have systematically undermined their party organizations, demonstrating instead that minority-party presidents have played a crucial role in building the vibrant parties that occupy a central place in today's politics. Galvin combines innovative theorizing with careful archival work to develop a persuasive new perspective on the president's role in the American political system."—Eric Schickler, University of California, Berkeley

"In this meticulously documented and gracefully written book, Dan Galvin puts presidents at the very center of party-building activities. Sometimes he finds them investing in their party, other times exploiting it. But whether they do one or the other, Galvin persuasively argues, critically depends upon their party's hold on political institutions beyond the White House. Anyone interested in the growth and decline of parties in our system of separated powers should read this important book."—William G. Howell, University of Chicago

"This is an important book. With voluminous research and incisive analysis, it demolishes the prevailing view of how presidents relate to their political parties. Galvin forces us to rethink not only how presidents might strengthen their parties along with their own political prospects but how the two major parties have developed in so dissimilar a manner over the last half century."—Bruce Miroff, author of The Liberals' Moment: The McGovern Insurgency and the Identity Crisis of the Democratic Party

"This is an important book. With voluminous research and incisive analysis, it demolishes the prevailing view of how presidents relate to their political parties. Galvin forces us to rethink not only how presidents might strengthen their parties along with their own political prospects but how the two major parties have developed in so dissimilar a manner over the last half century."—Bruce Miroff, SUNY, Albany