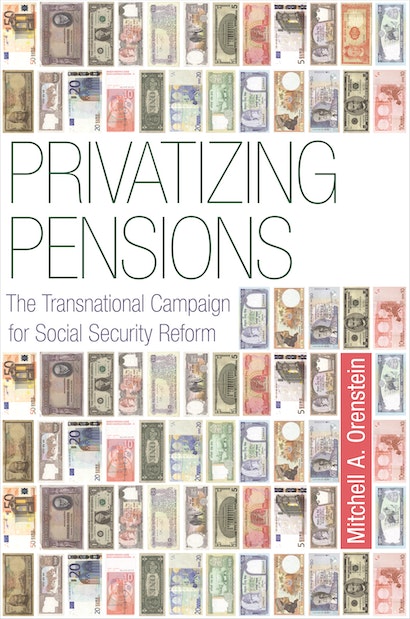 To what extent do international organizations, global policy networks, and transnational policy entrepreneurs influence domestic policy makers? Have we entered a new phase of globalization that, unbeknownst to most citizens, shapes policies that used to be the sole domain of domestic politics? Privatizing Pensions reveals how international institutions — such as the World Bank, USAID, and other transnational policy actors — have played a seminal role in the development, diffusion, and implementation of new pension reforms that are transforming the postwar social contract in more than thirty countries worldwide, including the United States.


Mitchell Orenstein shows how transnational actors have driven change in a policy area once thought to be beyond reform in many countries, and how they have done so by deploying their unique resources and legitimacy to promote new ideas, recruit disciples worldwide, and provide a broad range of technical assistance to government reformers over the long term. He demonstrates that while domestic decision makers may retain veto power over these reforms — which replace traditional social security with individual pension savings accounts — transnational policy makers play the role of “proposal actors,” shaping the information, preferences, and resources of their domestic clients.

Privatizing Pensions argues that even the most quintessentially domestic areas of policy have been thoroughly globalized, and that these international influences must be better understood.

Mitchell A. Orenstein is the S. Richard Hirsch Associate Professor of European Studies at Johns Hopkins University. His books include Out of the Red: Building Capitalism and Democracy in Postcommunist Europe.

"Orenstein reports on the efforts and impact of so-called transnational actors—international organizations, global policy networks, and multilateral and bilateral aid agencies—in contributing to significant reforms in the 'development, diffusion, and implementation' of new pension privatization plans. . . . An excellent book that will be treasured by scholars and policy makers."—H.I. Liebling, Choice

"Privatizing Pensions offers well-researched evidence to back theoretical claims. . . . The book is convincing, and useful for graduate seminars dealing with issues ranging from globalization to social policy reform. Scholars will find the book useful because it formulates a systematic framework for the analysis of the transnational actors-policy development nexus."—Daniel Béland, Political Studies Review

"Orenstein's book provides both a powerful theoretical statement of transnational actors' importance and a careful empirical template for studying their influence. All scholars of the welfare state will need to read and come to terms with these insights."—Andrew Roberts, American Journal of Sociology

"In this carefully crafted, comprehensive study, Mitchell Orenstein provides a persuasive analysis of the significance of transnational policy actors in pension privatization around the world. The empirical evidence is strong and the theoretical framework is applicable to a wide range of social policy issues. The book presents an important challenge to state-centric perspectives, as well as many of the interest-based assumptions of political economy approaches. This is a first-rate study which deserves attention from both academic and policy-oriented audiences."—Robert R. Kaufman, Rutgers University

"An innovative investigation into the role of transnational actors in national pension policy. Orenstein argues convincingly that transnational actors matter but that they need to be more broadly defined and their influence not reduced to money or coercion. They work through various channels, most importantly through the power of ideas, adaptability to country circumstances, learning from experience, and building coalitions with other transnational and domestic actors. The proposed conceptualization constitutes a major progress in this area."—Robert Holzmann, World Bank

"An excellent book that makes a significant theoretical contribution, and supports it with a great deal of solid empirical research. Orenstein demonstrates that decision making in a crucial area of domestic policy—namely pension system reform—is strongly influenced by transnational policy actors. His argument is novel and important."—Kurt Weyland, University of Texas, Austin

"This is a thoughtful and well-researched book on an important topic. Orenstein argues that international actors—including but not limited to the international financial institutions—exert influence in complex and multifaceted ways on domestic policy processes. The book is the best I know in making this case."—Stephan Haggard, University of California, San Diego