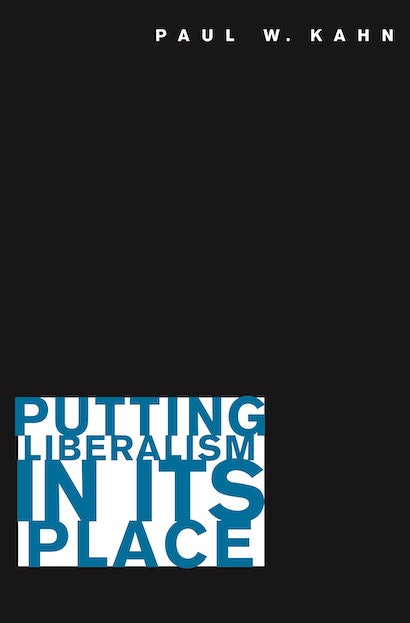 In this wide-ranging interdisciplinary work, Paul W. Kahn argues that political order is founded not on contract but on sacrifice. Because liberalism is blind to sacrifice, it is unable to explain how the modern state has brought us to both the rule of law and the edge of nuclear annihilation. We can understand this modern condition only by recognizing that any political community, even a liberal one, is bound together by faith, love, and identity.

Putting Liberalism in Its Place draws on philosophy, cultural theory, American constitutional law, religious and literary studies, and political psychology to advance political theory. It makes original contributions in all these fields. Not since Charles Taylor’s The Sources of the Self has there been such an ambitious and sweeping examination of the deep structure of the modern conception of the self.


Kahn shows that only when we move beyond liberalism’s categories of reason and interest to a Judeo-Christian concept of love can we comprehend the modern self. Love is the foundation of a world of objective meaning, one form of which is the political community. Arguing from these insights, Kahn offers a new reading of the liberalism/communitarian debate, a genealogy of American liberalism, an exploration of the romantic and the pornographic, a new theory of the will, and a refoundation of political theory on the possibility of sacrifice.


Approaching politics from the perspective of sacrifice allows us to understand the character of twentieth-century politics, which combined progress in the rule of law with massive slaughter for the state. Equally important, this work speaks to the most important political conflicts in the world today. It explains why American response to September 11 has taken the form of war, and why, for the most part, Europeans have been reluctant to follow the Americans in their pursuit of a violent, sacrificial politics. Kahn shows us that the United States has maintained a vibrant politics of modernity, while Europe is moving into a postmodern form of the political that has turned away from the idea of sacrifice. Together with its companion volume, Out of Eden, Putting Liberalism in Its Place finally answers Clifford Geertz’s call for a political theology of modernity.

Paul W. Kahn is the Robert W. Winner Professor of Law and Humanities at Yale Law School, where he is also Director of the Orville H. Schell, Jr. Center for International Human Rights. He is the author of The Cultural Study of Law, The Reign of Law; Legitimacy and History, Law and Love, and Out of Eden.

"[This] is a beautifully written meditation on the sources of political meaning that cannot be justified by rational argumentation. It challenges the reader to acknowledge that politics is a fundamentally amoral enterprise that resembles romantic love more than rational debate."—Margaret Kohn, Political Theory

"Putting Liberalism in Its Place is a real success. It is learned, clear, forceful, and loaded with quotable lines. Most importantly, it takes a much needed shot across the bow of academic liberal theory."—Dan Silver, Foundations of Political Theory

"This intriguing book is filled with challenging ideas and supplies some missing ingredients of the intellectual groundwork of liberalism."—James Magee, Law and Politics Book Review

"Paul W. Kahn . . . argue[s] that liberal theory lacks the conceptual resources to understand political life. . . . Kahn sees liberalism as a philosophy for a postmodern condition, which may be emerging in Europe, where the state may be losing its grip on the moral imagination and 'politics [is] stripped of the political.' The book offers a provocative argument and is well written."—Choice

"As a critique of liberal assumptions about human nature and political theory and as a thoughtful essay on political theology and evil, Kahn's analyses initiate discussions that should be continued."—Shalom Carmy, Hebraic Political Studies

"In this lucid, powerfully reasoned, deeply original major new contribution to contemporary political thought, Paul Kahn X-rays the liberal faith, summoning it to a new honesty regarding its own purposes, unacknowledged motivations, blind spots and limitations, and challenging it to a find a new, if perhaps more modest, place in the world."—Jonathan Schell, author of The Unconquerable World and The Fate of the Earth

"This important book represents the culmination of a career by one of the most original legal theorists working today. It is a work of both rigor and imagination. Building on but also transcending his earlier work, Paul Kahn presents a breathtakingly vast panorama of the conundrum of American liberalism in its theoretical, political, and daily practiced genres. Along the way, he tackles a wide variety of materials, from Supreme Court cases to Greek tragedies and leading political theory texts."—Annelise Riles, Cornell University, author of The Network Inside Out

"A striking book. Putting Liberalism in Its Place is a thoughtful, provocative work that demands, and will repay, serious engagement."—Patchen Markell, University of Chicago, author of Bound by Recognition