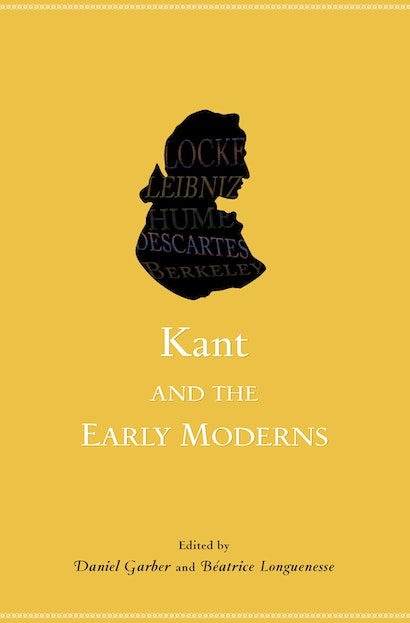 For the past 200 years, Kant has acted as a lens — sometimes a distorting lens — between historians of philosophy and early modern intellectual history. Kant’s writings about Descartes, Leibniz, Locke, Berkeley, and Hume have been so influential that it has often been difficult to see these predecessors on any terms but Kant’s own. In Kant and the Early Moderns, Daniel Garber and Béatrice Longuenesse bring together some of the world’s leading historians of philosophy to consider Kant in relation to these earlier thinkers.


These original essays are grouped in pairs. A first essay discusses Kant’s direct engagement with the philosophical thought of Descartes, Leibniz, Locke, Berkeley, or Hume, while a second essay focuses more on the original ideas of these earlier philosophers, with reflections on Kant’s reading from the point of view of a more direct interest in the earlier thinker in question. What emerges is a rich and complex picture of the debates that shaped the “transcendental turn” from early modern epistemology, metaphysics, and philosophy of mind to Kant’s critical philosophy.

"This small collection of essays is distinguished by the caliber of its contributors and by the exceptional promise of the discussion that it only begins . . . This is an exceptionally productive exercise that allows readers not only to see these early modern figures in their own light, but also to appreciate what is truly novel about Kant's interpretation of them."—Choice

"This volume is an inspired project. . . . The objections-and-replies format of this collection is very graceful and effective in allowing the authors to explore Kant's interpretation of his predecessors, and to defend these predecessors against his criticisms."—Claudia M. Schmidt, Philosophy in Review

"This book is a very important contribution to the study of the history of modern philosophy. In highlighting the importance of paying close attention to Kant's criticisms of his immediate predecessors, the contributors to Kant and the Early Moderns provide new perspectives on Kant, as well as Descartes, Locke, Leibniz, Berkeley, and Hume."—Edwin McCann, University of Southern California

"Kant and the Early Moderns covers a great deal of territory in an informative, illuminating, and original way. It will be of interest to any student of modern philosophy."—Richard E. Aquila, University of Tennessee