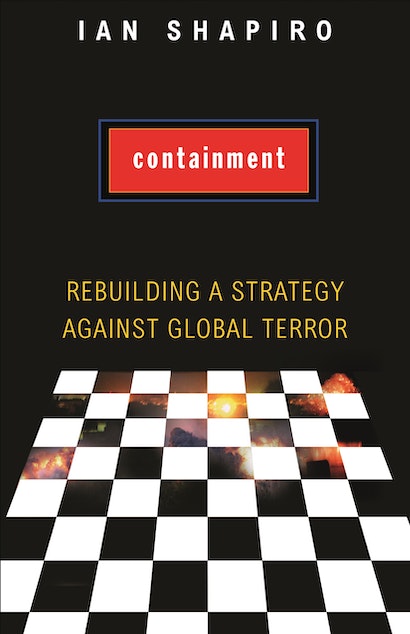 In this powerfully argued book, Ian Shapiro shows that the idea of containment offers the best hope for protecting Americans and their democracy into the future. His bold vision for American security in the post-September 11 world is reminiscent of George Kennan’s historic “Long Telegram,” in which the containment strategy that won the Cold War was first developed.


The Bush Doctrine of preemptive war and unilateral action has been marked by incompetence — missed opportunities to capture Osama bin Laden, failures of postwar planning for Iraq, and lack of an exit strategy. But Shapiro contends that the problems run deeper. He explains how the Bush Doctrine departs from the best traditions of American national-security policy and accepted international norms, and renders Americans and democratic values less safe. He debunks the belief that containment is obsolete. Terror networks might be elusive, but the enabling states that make them dangerous can be contained. Shapiro defends containment against charges of appeasement, arguing that force against a direct threat will be needed. He outlines new approaches to intelligence, finance, allies, diplomacy, and international institutions. He explains why containment is the best alternative to a misguided agenda that naively assumes democratic regime change is possible from the barrel of an American gun.


President Bush has defined the War on Terror as the decisive ideological struggle of our time. Shapiro shows what a self-defeating mistake that is. He sets out a viable alternative that offers real security to Americans, reclaims America’s international stature, and promotes democracy around the world.

Ian Shapiro is Sterling Professor of Political Science and Henry R. Luce Director of the MacMillan Center for International and Area Studies at Yale University. His many books include The Flight from Reality in the Human Sciences and, with Michael J. Graetz, Death by a Thousand Cuts: The Fight over Taxing Inherited Wealth (both Princeton).

"Had President Bush adopted Shapiro's approach on Sept. 12, 2001, it is quite likely that he would have had more success in marginalizing adversaries."—Samantha Power, New York Times Book Review

"The Bush administration's post-9/11 national security strategy has come in for tremendous criticism, but opponents have had difficulty articulating a coherent alternative. Here is one. Shapiro . . . offers a brilliant sketch of a new strategic vision that draws on Cold War-era containment ideas."—G. John Ikenberry, Foreign Affairs

"It's to be hoped that Shapiro is not done—his ideas here deserve extended discussion. And as the post-Bush world starts to take form, there will be a continued need for creative thinking and the rediscovery of intellectual resources we have unwisely abandoned."—Aziz Huq, American Prospect

"Shapiro makes a convincing case that so-called rogue states like North Korea and Iran can be deterred and contained even if they develop nuclear weapons."—Joseph S. Nye, Jr., Chronicle of Higher Education

"Containment is both a forceful critique of current foreign policy and a prescriptive response to it. . . . Shapiro offers a series of complicated and detailed strategies to confront global terror, including greater investment in human intelligence to methodically track and stop weapons proliferation, and to his credit, he avoids oversimplification and instead offers thorough analyses of individual situations. . . . If only such a clear and thorough analysis existed before the last election."—Joshua J. Kearney, The Harvard Crimson

"The effects of the Iraq war upon the discussion of American foreign policy have come in waves. The first wave was all about competence...Now the second wave of the discussion is under way, and its subject is not competence but ideology...Ian Shapiro's book is an important document of this second wave...Shapiro argues that the only strategy that makes sense in the aftermath of Iraq is the old strategy of containment, which he believes is firmly grounded in American history and American values. The only correct retort to Bushism is Kennanism.... Containment, Shapiro contends, is our fallback, and obviously a wiser course."—James P. Rubin, The New Republic

"This book is seductive in its belief that the university as endeavour can contribute to a better world. It is written with sensitivity, with reason and with the intelligent, well rounded insights of a liberal educator of great experience. The book asserts everything that I believe in."—Pamela Taylor, Educational Review

"Shapiro's overall case is compelling. . . . [A]mong the growing number of critiques of the Bush strategy, his is the most comprehensive and, arguably, the most convincing."—Lieutenant General William E Odom, Cambridge Review of International Affairs

"Shapiro's style is more confrontational than contained but that is to be welcomed in this short work containing some pointed observations."—Bill Durodié, International Affairs

"This book succeeds in showing that there are sound alternatives to the dominant unilateralist approach for dealing with the national security and foreign policy challenges confronted by the United States. Bravo for Professor Shapiro!"—Ernesto Zedillo, former President of Mexico, Director of the Yale Center for the Study of Globalization

"At a time and on an issue that cry out for fresh, critical, and constructive thinking, Ian Shapiro has performed a great service by laying out a bold yet pragmatic idea for dealing with the threats America faces in the post-September 11 world. He has adapted an old idea that worked—the containment of communist expansion during the Cold War—to the task of replacing a policy that has, to a spectacular and tragic degree, not worked: military preemption and the attempt to impose democracy in the name of waging 'the War on Terror.' His critique of both the Bush administration and many of its Democratic opponents is hard-hitting and well substantiated; his recommendations are compelling; and his presentation is concise and forceful. The result is a major contribution to the debate over the single most vexing and important political challenge facing the U.S. and the world."—Strobe Talbott, President of the Brookings Institution, former Deputy Secretary of State

"Ian Shapiro follows up his masterful analysis of the politics of taxation(Death by a Thousand Cuts) with a wonderfully clinical dissection of U.S. foreign policy. Shapiro recognizes that the policy of the present administration is not just a bad idea stumbled across by accident, but a bad idea that was carefully husbanded and nurtured for years by people who were deadly serious about power and unafraid to use it. It is time, he believes, for Democrats who are serious about making the best use of power to stop triangulating these bad ideas, and to start trying to nurture some good ideas of their own. This crystal-clear account of the merits of a policy of containment represents an excellent place for them to begin."—David Runciman, author of The Politics of Good Intentions

"This is by far the best critique of the Bush administration's national-security doctrine that I have read. Its prose is lively and engaging. It focuses on the essentials and makes a clear argument that is effectively supported by his judicious reflections on the history of the Cold War and on contemporary issues including the war on terror and the conflicts in the Middle East."—Michael W. Doyle, Columbia University

"Shapiro's new book is a rich and nuanced critique of the Bush administration's doctrine of preemption and democracy promotion and its related foreign-policy agendas. He traces the rise of the administration's preoccupation with Iraq and terrorism, and the fallout in domestic and regional terms. He manages to cut to the heart of the matter without compromising the detail. His analysis also provides the all-important historical backdrop that has often been absent in other studies."—Anoush Ehteshami, Durham University