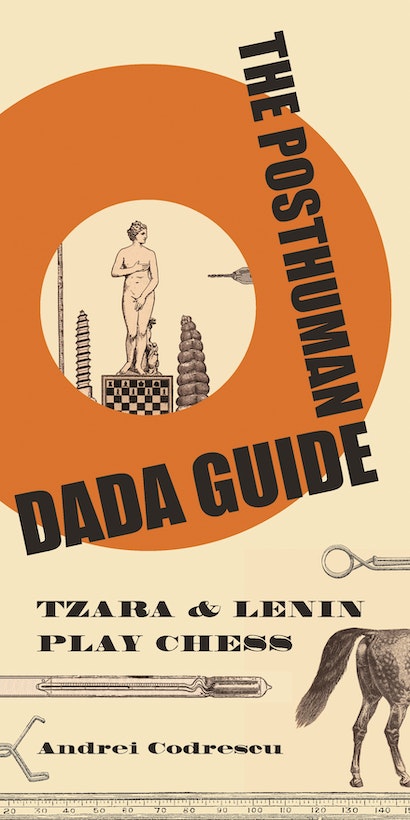 This is a guide for instructing posthumans in living a Dada life. It is not advisable, nor was it ever, to lead a Dada life.”—The Posthuman Dada Guide

The Posthuman Dada Guide is an impractical handbook for practical living in our posthuman world—all by way of examining the imagined 1916 chess game between Tristan Tzara, the daddy of Dada, and V. I. Lenin, the daddy of communism. This epic game at Zurich’s Café de la Terrasse—a battle between radical visions of art and ideological revolution—lasted for a century and may still be going on, although communism appears dead and Dada stronger than ever. As the poet faces the future mass murderer over the chessboard, neither realizes that they are playing for the world. Taking the match as metaphor for two poles of twentieth- and twenty-first-century thought, politics, and life, Andrei Codrescu has created his own brilliantly Dadaesque guide to Dada—and to what it can teach us about surviving our ultraconnected present and future. Here dadaists Duchamp, Ball, and von Freytag-Loringhoven and communists Trotsky, Radek, and Zinoviev appear live in company with later incarnations, including William Burroughs, Allen Ginsberg, Gilles Deleuze, and Newt Gingrich. The Posthuman Dada Guide is arranged alphabetically for quick reference and (some) nostalgia for order, with entries such as “eros (women),” “internet(s),” and “war.” Throughout, it is written in the belief “that posthumans lining the road to the future (which looks as if it exists, after all, even though Dada is against it) need the solace offered by the primal raw energy of Dada and its inhuman sources.

Andrei Codrescu is an award-winning writer and National Public Radio commentator. His latest books are Jealous Witness: New Poems and New Orleans, Mon Amour: Twenty Years of Writing from the City (Algonquin). The author of many essay collections, including The Disappearance of the Outside, he is the MacCurdy Distinguished Professor of English at Louisiana State University. 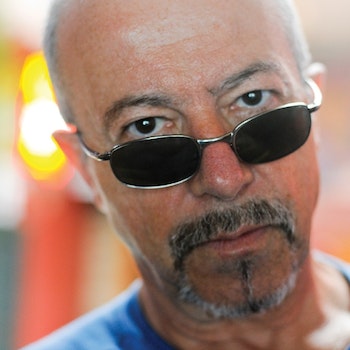 "One of our most prodigiously talented and magical writers."—New York Times Book Review

"Can't decide whether to cry or laugh? Laugh at absurdity, laugh at hardship, laugh at poverty, says Andrei Codrescu in his maddening, enlightening, self-contradictory, highly amusing new book. . . . [Codrescu] has rolled into one slim guide a postmodern self-help manual, a history lesson, a love letter to dissident poets, a hard jab at communism and a veiled autobiography. . . . The guide is, beneath it all, a mournful celebration of the achievements of pre-communist Romanian Jews, such as Tzara and modernist painter and architect (and Dadaist) Marcel Janco."—Carly Berwick, Los Angeles Times

"Any reader looking for a quirky, polemical, provocative introduction to Dada might like to try Andrei Codrescu's Posthuman Dada Guide, in which the author's key terms are alphabetically listed and 'hermeneutically filleted'. His linguistic glee also means that this dictionary can easily be read cover to cover."—Peter Read, Times Literary Supplement

"This Zagat-sized handbook, a Dadaist chop suey showcasing the astonishing intellectual range of English professor and NPR commentator Codrescu, is arranged alphabetically and topically, which permits one to dip in or to read it all. The occasionally outrageous encyclopedic juxtapositions of entries give a firsthand experience similar to the effect of Dada cutups and collages."—Publishers Weekly

"A hard-edged, rapier-like volume, perfect for sliding into a back pocket of skinny hipster pants or stabbing into the complacent underbelly of bourgeois (or bourgeois-bohemian) society. It offers a headier-than-usual tour of the early-1900s avant-garde, sprinkled with sex appeal for the would-be MySpace-age revolutionary. . . . As art theory, the Guide could even be preferable to a college seminar on modernism. . . . [Codrescu] also places Dada on a broader historical stage than it usually receives, mingling it with world politics."—Eli Epstein-Deutsch, Village Voice

"Even for professional provocateur Andrei Codrescu, he of the playful intelligence and sardonic wit, this new book is quite something. It's out there—a chronicle of an imagined chess game between V.I. Lenin and Tristan Tzara, the founder of Dada, set in the cafe culture of Zurich, Switzerland, in 1916, amid the ferment of bohemianism and revolution. It's a scholarly work, with extensive footnotes; it's a work of imagination; it's a guidebook to a strange new era. It's a call to remember humanity in a post-human time, and an incitement. To read it is to light a mental fuse."—Susan Larson, New Orleans Times-Picayune

"A profoundly provocative look at dada. . . . If you're vaguely familiar with Codrescu's NPR essays or other writings, than you already know that this is a book laced with wit and humor. He makes an erudite topic easy—and pleasurable—to follow."—Robert L. Pincus, San Diego Union Tribune

"A dictionary, a history of art movements, a manifesto, and a joke book; [The Posthuman Dada Guide] traverses high and low, seeking answers to our most persistent confusions about art, culture, and identity. . . . By the end, the reader has come to grips with Codrescu's stoic, but darkly hopeful, vision for a future that is no future at all."—D. Scot Miller, San Francisco Bay Guardian

"Codrescu's analysis of the chess game is written with attitude—itself a Dada-like performance—balancing critique with reinvention, aiming to reveal Dada's place in 'posthuman' life. This guide is true to its title, fitting comfortably in a pocket, ready to be deployed at the slightest provocation."—Alan Lucey, Bookforum

"Erudite, witty, often demented, Codrescu's book is an excellent introduction to the matter and spirit of dada."—Justin Clemens, The Australian

"A delicious book. . . . A fascinating mix of history, common and obscure . . . rigorously intellectual without being stuffy or dogmatic, serious without being solemn and . . . obviously and sneakily playful at the same time."—Michel Basilieres, Toronto Star

"Peppered with warnings not to make Dada a guide for living, the Guide makes it all the more alluring. Readers of this book acquire a delicious complicity with Dada. I can't stop intoning it. Dada dada dada dada. This is a subversive book."—Helen Scully, ArtVoices Magazine

"Ever want to run naked across a convention floor, pie-hit a bishop, or show up at a job interview in a firecracker hat, screaming poetry until security guards haul you away? Andrei Codrescu's The Posthuman Dada Guide may not be the literal how-to that the title implies, but it will definitely give you the historical and philosophical basis you need to justify a stunt to your cell mates while the authorities figure out what to do with you. . . . Fascinating and indispensible."—John-Ivan Palmer, Rain Taxi Review of Books

"He's all over the place, and no place in particular—almost the perfect definition of Dada. Best read as a poem pretending to be prose (both Tzara and Lenin were pseudonyms, after all), The Posthuman Dada Guide gives a barbaric yawp in the best tradition of Walt Whitman—and, in its own peculiar way, it's just as American."—Ben Steelman, Star News

"A roller-coaster ride of essay(s) and grab-bag of ideas, history, and recollections, The Posthuman Dada Guide is an appropriately loose and shifting piece. It is informative and entertaining."—M. A. Orthofer, Complete Review

"The chess game (both fictitious and ongoing) puts politic and parody at one and at war. The scene is a fast flashing, nonlinear montage taking us in, through and out of the 20th century and delivering us into the 21st, spinning. . . . It is recommended that you carry this guide with you at all times. Consider reading it aloud in the most public of places. . . . The perfect prescription against the posthuman condition—that place where our senses are all too well rehearsed and clearly limiting."—Katherine Anders, Baton Rouge Advocate

"[A] literary event, a spectacular splash of intelligence and erudition, of clean style and magical impressionability."—Nicholas Catanoy, World Literature Today

"While it takes its cue from an imaginary game of chess, the book is in fact a witty pointer into the real fabric of contemporary art and politics . . . refreshingly 'un-theoretical' in its approach, and Codrescu's writing is utterly pleasurable."—Cosana Eram, Vetiver blog

"By combining . . . vivid personal accounts with brilliant literary theory, The Posthuman Dada Guide becomes more than a review of the Dadaism's history. It represents a spiritual and intellectual journey in itself, a guide, as Codrescu states at the book's beginning for instructing posthumans in living a Dada life."—John Nizalolwski, Magill's Literary Annual

"This highly original, beautifully written, and charming book is vintage Andrei Codrescu. No one else has written anything remotely like it. One is carried along by the author's sheer energy and drive, his good humor, his ability to laugh at himself, and his own truly Dada personality. The Posthuman Dada Guide will introduce Dada thinking to a whole new readership."—Marjorie Perloff, author of The Vienna Paradox

"No other book has treated the relationship between the artistic and revolutionary avant-gardes as originally and provocatively as Codrescu's. This is both an immensely illuminating essay of intellectual history and a disturbing meditation on absolute ideals turned into alibis for tyranny. Magically blending sarcasm and gravity, Codrescu invites us to engage in an emancipatory laughter as an antidote to morose scholasticism and dogmatic obscurantism."—Vladimir Tismaneanu, author of Stalinism for All Seasons