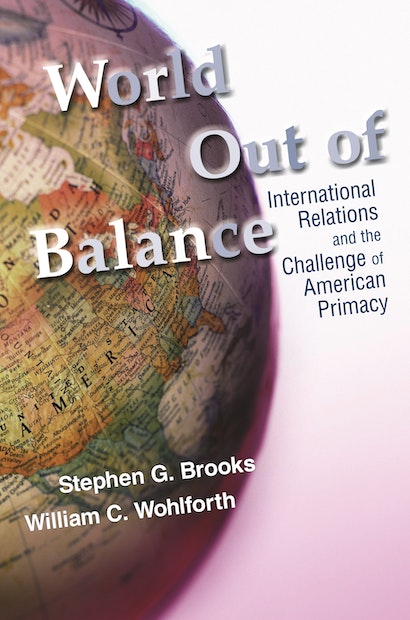 World Out of Balance is the most comprehensive analysis to date of the constraints on the United States’ use of power in pursuit of its security interests. Stephen Brooks and William Wohlforth overturn conventional wisdom by showing that in a unipolar system, where the United States is dominant in the scales of world power, the constraints featured in international relations theory are generally inapplicable. In fact, the authors argue that the U.S. will not soon lose its leadership position; rather, it stands before a twenty-year window of opportunity for reshaping the international system.


Although American primacy in the world is unprecedented, analysts routinely stress the limited utility of such preeminence. The authors examine arguments from each of the main international relations theories — realism, institutionalism, constructivism, and liberalism. They also cover the four established external constraints on U.S. security policy — international institutions, economic interdependence, legitimacy, and balancing. The prevailing view is that these external constraints conspire to undermine the value of U.S. primacy, greatly restricting the range of security policies the country can pursue. Brooks and Wohlforth show that, in actuality, the international environment does not tightly constrain U.S. security policy. World Out of Balance underscores the need for an entirely new research agenda to better understand the contours of international politics and the United States’ place in the world order.

"Even as pundits are proclaiming the end of the United States' unipolar moment, scholars are still trying to understand the exact nature of U.S. primacy. If the United States is the most powerful state the world has seen, what constrains or disciplines its security pursuits? In this important book, Brooks and Wohlforth survey the leading schools of thought looking for answers."—Foreign Affairs

"The authors dispute both the logic and the evidence that has been adduced in support of such claims and make the case so clearly that World out of Balance can be used in upper-division undergraduate courses and also read with profit by members of the profession. It will stand as a major book for years to come."—Robert Jervis, Perspectives on Politics

"[T]his book is an important contribution to international relations studies and should be included in any upper-level undergraduate course or graduate seminar that is concerned with issues of power, primacy or polarity."—Patrick Shea, Political Studies Review

"A sophisticated and elegant challenge to the view that U.S. primacy is fast on the wane. By deftly backing up theoretical argument with historical example, Brooks and Wohlforth redefine debate about the durability of a unipolar world and the future of U.S. grand strategy."—Charles A. Kupchan, author of The End of the American Era

"Effectively organized and well-written, this timely book engages many of the important debates in international relations theory and American foreign policy in a thoughtful and thought-provoking way. Without question, this is a major contribution to the field."—David Baldwin, Princeton University

"This substantial book provides a full analysis of key questions facing the United States today: Does U.S. power—specifically unipolar or hegemonic power—bring large benefits? And does the U.S. position call for a limited or an ambitious foreign policy? The authors draw from a wide range of established arguments and add important arguments of their own, to provide clear and powerful answers."—Charles Glaser, University of Chicago