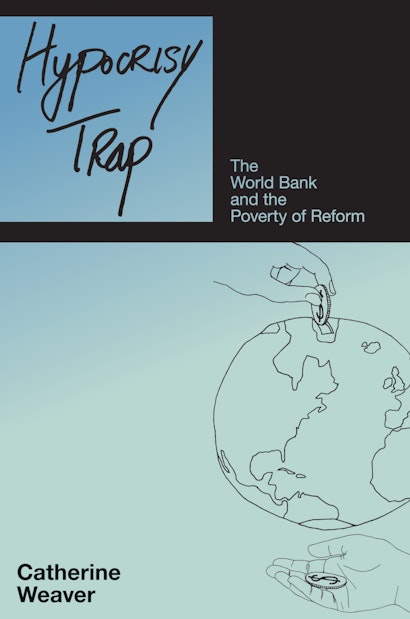 As the preeminent international development agency for the past sixty years, the World Bank has attracted equal amounts of criticism and praise. Critics are especially quick to decry the World Bank’s hypocrisy — the pervasive gaps between the organization’s talk, decisions, and actions. In the wake of the Paul Wolfowitz leadership scandal in May 2006, perceptions of hypocrisy have exacted a heavy toll on the Bank’s authority and fueled strong demands for wide-scale reform. Yet what exactly does the hypocrisy of the World Bank look like, and what or who causes it? In Hypocrisy Trap, Catherine Weaver explores how the characteristics of change in a complex international organization make hypocrisy difficult to resolve, especially after its exposure becomes a critical threat to the organization’s legitimacy and survival.


Using a rich sociological model and several years of field research, Weaver delves into the political and cultural worlds within and outside of the Bank to uncover the tensions that incite and perpetuate organized hypocrisy. She examines the sources and dynamics of hypocrisy in the critical cases of the Bank’s governance and anticorruption agenda, and its recent Strategic Compact reorganization. The first book to unravel the puzzle of organized hypocrisy in relation to reform at the World Bank, Hypocrisy Trap ultimately enriches our understanding of culture, behavior, and change in international organizations.

Catherine Weaver is assistant professor of political science at the University of Kansas.

"One constant frustration to anyone who follows the World Bank is the frequent difference between the institution's words and actions. In this book, Weaver offers a convincing explanation for this 'organized hypocrisy'. . . . The book's initial chapters provide a good introduction to the idea of hypocrisy as an institutional response to conflicting demands."—C. Kilby, Choice

"Hypocrisy Trap provides a fresh look at a long-standing problem: Why do international organizations such as the World Bank so often say one thing but do another? Weaver combines an impressive array of interviews and secondary sources with organizational sociology to show why there is a trap and why it is not easy to avoid or escape. The resulting analysis will be of interest to scholars concerned with how international organizations actually operate—and to practitioners who want to operate them more successfully. Unfortunately, it turns out that good governance is easier to say than to do."—Duncan Snidal, University of Chicago

"When institutional pressures and bureaucratic goals collide, hypocrisy is almost inevitable. The contradiction between talk and action is built into the very fabric of the World Bank. The outcome, as Catherine Weaver argues in this timely and compelling study, is systemic rather than sporadic hypocrisy."—Peter J. Katzenstein, Cornell University

"An excellent book: theoretically sophisticated, empirically rich, and refreshingly accessible. This is the best book I have seen about the World Bank in a long time."—Martha Finnemore, George Washington University

"While others have examined dysfunction and pathology more generally in international organizations, Weaver's book is the first to offer a theoretically sophisticated analysis of hypocrisy specifically. Weaver casts a broad net and aims high."—Paul J. Nelson, University of Pittsburgh