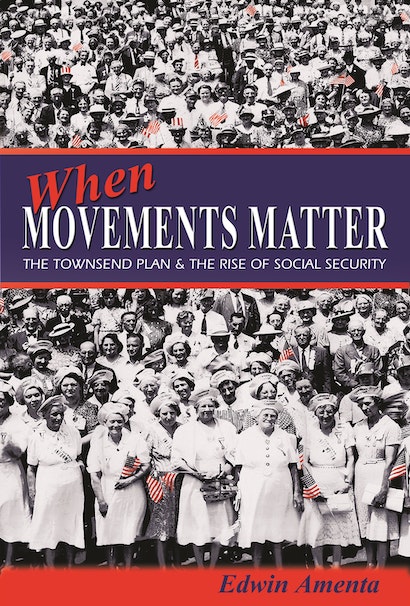 When Movements Matter accounts for the origins of Social Security as we know it. The book tells the overlooked story of the Townsend Plan — a political organization that sought to alleviate poverty and end the Great Depression through a government-provided retirement stipend of $200 a month for every American over the age of sixty.


Both the Townsend Plan, which organized two million older Americans into Townsend clubs, and the wider pension movement failed to win the generous and universal senior citizens’ pensions their advocates demanded. But the movement provided the political impetus behind old-age policy in its formative years and pushed America down the track of creating an old-age welfare state.


Drawing on a wealth of primary evidence, historical detail, and arresting images, Edwin Amenta traces the ups and downs of the Townsend Plan and its elderly leader Dr. Francis E. Townsend in the struggle to remake old age. In the process, Amenta advances a new theory of when social movements are influential.


The book challenges the conventional wisdom that U.S. old-age policy was a result mainly of the Depression or farsighted bureaucrats. It also debunks the current view that America immediately embraced Social Security when it was adopted in 1935. And it sheds new light on how social movements that fail to achieve their primary goals can still influence social policy and the way people relate to politics.

Edwin Amenta is professor of sociology and history at the University of California, Irvine. He is the author of Professor Baseball and Bold Relief: Institutional Politics and the Origins of Modern American Social Policy (Princeton).

"Compelling. . . . Grounded in impressive archival research that easily makes it the best book on the Townsend Plan ever published. . . . The book is well-written and the balance between its theoretical and historical components is excellent."—Daniel Béland, Contexts

"Amenta's sharp theoretical analysis of the Townsend mobilization and his rigorous excavation of the historical evidence sets a high standard for future research."—Joseph E. Luders, Perspectives on Politics

"When Movements Matter is clearly written and is the most detailed history of the Townsend Plan published."—Raymond Richards, Journal of American History

"First-class scholarship. . . . When Movements Matter is beautifully written, well argued, and systematically researched. This is state of the art theory and research. . . . If you have any interest in why and how social movements succeed or fail, you must read Amenta."—Nella Van Dyke, Contemporary Sociology

"The best history we have of both the Townsend Plan and the pension movement from the Great Depression to 1950. More generally, it is one of the finest accounts to date of any movement of 'challengers' over a long era of economic and political turbulence."—W. Elliot Brownlee, Business History Review

"This is the best crafted book I have seen in awhile. It is a delightfully written (and at times even humorous) account of the rise and fall of the Townsend Movement.... I recommend this book strongly to all people interested in understanding the dynamics of social movements and not only those interested in movement consequences."—Sarah A. Soule, Mobilization

"This is historical sociology at its best, written by one of the field's best practitioners."—Edward Berkowitz, George Washington University