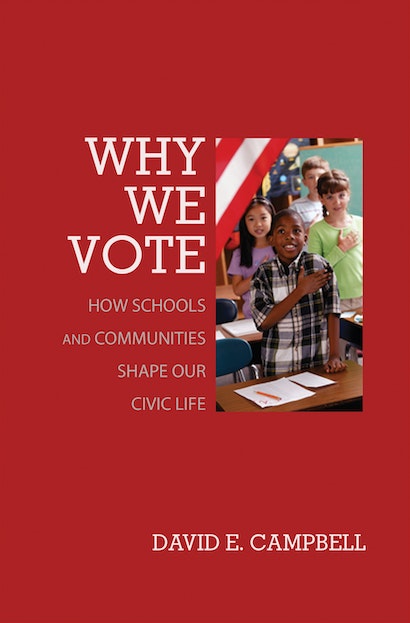 
Much of the research on political participation has found that levels of participation are higher in diverse communities where issues important to voters are hotly contested. In this well-argued book, David Campbell finds support for this view, but also shows that homogenous communities often have very high levels of civic participation despite a lack of political conflict.


Campbell maintains that this sense of civic duty springs not only from one’s current social environment, but also from one’s early influences. The degree to which people feel a sense of civic obligation stems, in part, from their adolescent experience. Being raised and thus socialized in a community with strong civic norms leads people to be civically engaged in adulthood. Campbell demonstrates how the civic norms within one’s high school impact individuals’ civic involvement — even a decade and a half after those individuals have graduated.


Efforts within America’s high schools to enhance young people’s sense of civic responsibility could have a participatory payoff in years to come, the book concludes; thus schools would do well to focus more attention on building civic norms among their students.

David E. Campbell is Assistant Professor of Political Science at the University of Notre Dame. He is a coauthor of Democracy at Risk: How Political Choices Undermine Citizen Participation, and What We Can Do About It and The Education Gap: Vouchers and Urban Schools as well as a coeditor of Charters, Vouchers, and Public Education.

"[A]n impressive study. . . . Extremely compelling and provocative. . . . Why We Vote challenges us to think seriously about the role of schools in society."—André Blais, Science Magazine

"In this examination of public engagement in the United States today, Campbell . . . argues that voter turnout is affected not only by people's desire to protect their own interests — the view traditionally taken by political scientists — but by their feelings of civic obligation as well."—Education Week

"This book provides the first solid, generalizable evidence of the influence of an adolescent's surroundings on adult political behavior. It offers a significant contribution to the study of voter turnout by showing how citizen duty is a factor in predicting political participation."—Richard Niemi, University of Rochester

"Why We Vote makes an important contribution to our understanding of the ways community contexts prompt voting. This clear and compelling analysis will add energy to the resurgence of interest in the study of political socialization."—Joseph Kahne, Mills College