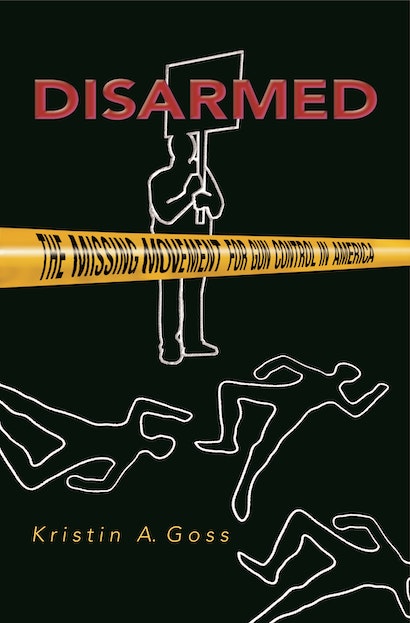 More than any other advanced industrial democracy, the United States is besieged by firearms violence. Each year, some 30,000 people die by gunfire. Over the course of its history, the nation has witnessed the murders of beloved public figures; massacres in workplaces and schools; and epidemics of gun violence that terrorize neighborhoods and claim tens of thousands of lives. Commanding majorities of Americans voice support for stricter controls on firearms. Yet they have never mounted a true national movement for gun control. Why? Disarmed unravels this paradox.


Based on historical archives, interviews, and original survey evidence, Kristin Goss suggests that the gun control campaign has been stymied by a combination of factors, including the inability to secure patronage resources, the difficulties in articulating a message that would resonate with supporters, and strategic decisions made in the name of effective policy. The power of the so-called gun lobby has played an important role in hobbling the gun-control campaign, but that is not the entire story. Instead of pursuing a strategy of incremental change on the local and state levels, gun control advocates have sought national policies. Some 40% of state gun control laws predate the 1970s, and the gun lobby has systematically weakened even these longstanding restrictions.


A compelling and engagingly written look at one of America’s most divisive political issues, Disarmed illuminates the organizational, historical, and policy-related factors that constrain mass mobilization, and brings into sharp relief the agonizing dilemmas faced by advocates of gun control and other issues in the United States.

Kristin A. Goss is Assistant Professor of Public Policy Studies and Political Science at Duke University.

"Goss has written an excellent book, useful to all students of lobbying. . . . This thoughtful, well-documented book should be read and examined by would-be gun control activists and other advocates for social reform."—Choice

"Rarely does a book make a significant contribution to two separate fields, but this work by Kristin Goss does. Readers interested in social movements and social movement theory will find an interesting case study of a movement that never happened—efforts to strengthen gun control laws in the United States. Those who study gun control will encounter a unique perspective on the interest group politics and policy making of firearms regulation. Well-researched and clearly written, the book is insightful and informative. Goss's journalistic background is evident, both in her prose and in the relative brevity of the book. Her arguments are clearly elucidated in a first chapter that should serve as a model."—Harry L. Wilson, Political Science Quarterly

"Having been involved in the gun safety movement since tragedy struck my family in 1993, I understand full well the history of the gun-control movement and the difficulties it has experienced, particularly in light of today's political environment in Washington. Disarmed is an excellent study of the efforts put forth by so many to reduce gun violence."—U.S. Representative Carolyn McCarthy (D-NY), founder of the Carolyn McCarthy Center on Gun Violence and Harm Reduction

"Kristin Goss has done important work here that fundamentally tells the history of the gun debate over the past twenty-five years and of the efforts of the opposing sides to outmaneuver each other. She deserves praise for research that is remarkable both in quality and in volume, and for presenting a massive body of facts in an extremely readable fashion."—Sarah Brady, Honorary Chair, Brady Campaign to Prevent Gun Violence

"This outstanding book combines theoretical import with a highly topical policy issue in a form that is exceptionally readable, engaging, thoughtful, mature, and insightful. Superb and inventive data analysis brings the book's theoretical formulations to life as they are applied to one of the most intractable, controversial, and interesting policy issues of the last century, gun control. No one has examined the issue from this end of the lens—the pro-control side—with such analytical depth and rigor until now."—Robert J. Spitzer, author of The Politics of Gun Control

"This book represents a fantastic project, well argued and well-written and much needed. Focusing on a critical policy topic, Kristin Goss posits a strong new idea for studying social movements—why they don't emerge or maybe why they undermobilize. The smooth, almost seamless movement between social and political theory and case material is, quite frankly, the strongest I have ever seen."—Bryan Jones, author of Politics and the Architecture of Choice, coauthor of Agendas and Instability in American Politics