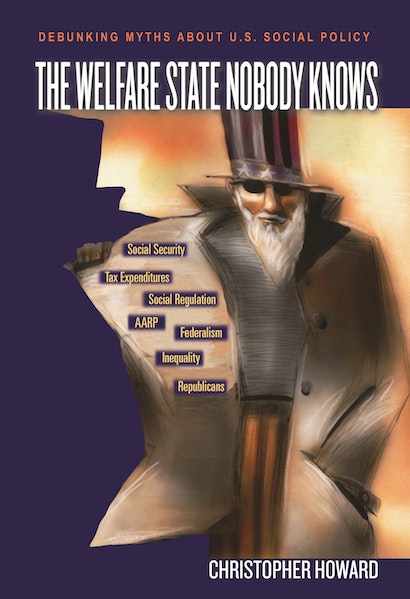 The Welfare State Nobody Knows challenges a number of myths and half-truths about U.S. social policy. The American welfare state is supposed to be a pale imitation of “true” welfare states in Europe and Canada. Christopher Howard argues that the American welfare state is in fact larger, more popular, and more dynamic than commonly believed. Nevertheless, poverty and inequality remain high, and this book helps explain why so much effort accomplishes so little. One important reason is that the United States is adept at creating social programs that benefit the middle and upper-middle classes, but less successful in creating programs for those who need the most help.


This book is unusually broad in scope, analyzing the politics of social programs that are well known (such as Social Security and welfare) and less well known but still important (such as workers’ compensation, home mortgage interest deduction, and the Americans with Disabilities Act). Although it emphasizes developments in recent decades, the book ranges across the entire twentieth century to identify patterns of policymaking. Methodologically, it weaves together quantitative and qualitative approaches in order to answer fundamental questions about the politics of U.S. social policy. Ambitious and timely, The Welfare State Nobody Knows asks us to rethink the influence of political parties, interest groups, public opinion, federalism, policy design, and race on the American welfare state.

Christopher Howard is the Pamela C. Harriman Professor of Government and Public Policy at the College of William and Mary. He is the author of The Hidden Welfare State (Princeton).

"The Welfare State Nobody Knows goes a long way to fill in the gap left by previous research intended to quantify and categorize the American welfare state. Howard's combination of quantitative and qualitative tools is refreshing."—Carrie A. Ross, Journal of Children and Poverty

"The Welfare State Nobody Knows is without doubt an insightful, provocative, and wide-ranging book that should reach a broad scholarly audience. In the classroom and in scholarly publications, the book will undoubtedly stimulate lively debates about the nature, history, and politics of American social policy. All students of American social policy would benefit from reading it."—Daniel Béland, American Journal of Sociology

"Forget what you thought you knew. Christopher Howard takes us on an eye-opening, mind-expanding, entirely unexpected tour of the American welfare state. He describes a big, popular, sprawling, often Republican system that—thanks to cherished American institutions like federalism—does not work very well. Smart, wise, synthetic, funny, and iconoclastic—The Welfare State Nobody Knows is required reading for everybody who wants to know about welfare, about politics, or about the United States."—James A. Morone, author of Hellfire Nation and The Democratic Wish

"Christopher Howard is one of the most original and provocative students of the American welfare state—and this book splendidly sums up his insights. We learn that the American welfare state is larger and more dynamic than many have believed—yet, to this day, it fails to ameliorate inequality or poverty. Scholars and citizens alike will find that this book raises questions and provides answers nowhere else to be found."—Theda Skocpol, Harvard University

"In The Welfare State Nobody Knows, Christopher Howard compellingly reveals an American welfare state that is at once larger than previously acknowledged and yet incapable of solving the fundamental social problems confronting the nation. The book, which combines narrative accounts and quantitative analysis, is up to date but historically grounded. It is also, at times, appropriately contentious. The book is a must read for anyone committed to understanding the unique character of social policy and politics in the U.S."—Mark A. Peterson, UCLA School of Public Affairs

"In this myth-busting book, Christopher Howard challenges cherished notions about the American welfare state—that it consists of two tiers with generous social insurance benefits for the middle class and stingy means-test benefits for the poor, that it emerged with two 'big bangs' in the 1930s and 1960s, that it is smaller than its European counterparts, and that the elderly usurp an unfair share of national resources. Beautifully written and clearly argued, The Welfare State Nobody Knows should be required reading for all students interested in American political development."—Jill Quadagno, Florida State University

"Howard provides ample food for thought-offering new perspectives on old questions, challenging prevailing stories about American social welfare policy, and sowing the seeds for more creative research and thought. The book's catchy, readable style and its attention to how to think about issues—questions to ask, data to consider, methods to use, and ways to assess our comfort or discomfort with results—engage the reader in applying the critical thinking skills that are essential to evaluating and participating in public policy."—Judith Feder, Georgetown University