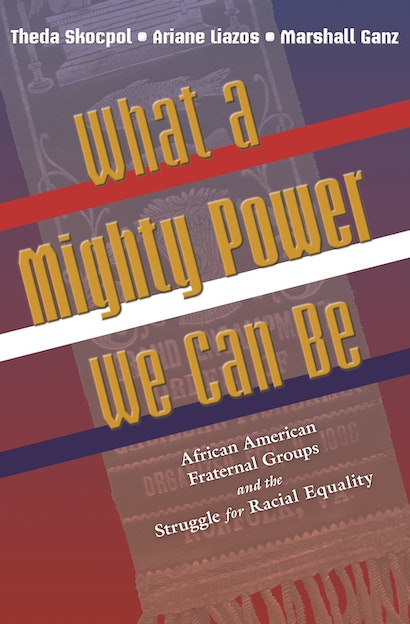 From the nineteenth through the mid-twentieth centuries, millions of American men and women participated in fraternal associations — self-selecting brotherhoods and sisterhoods that provided aid to members, enacted group rituals, and engaged in community service. Even more than whites did, African Americans embraced this type of association; indeed, fraternal lodges rivaled churches as centers of black community life in cities, towns, and rural areas alike. Using an unprecedented variety of secondary and primary sources — including old documents, pictures, and ribbon-badges found in eBay auctions — this book tells the story of the most visible African American fraternal associations.


The authors demonstrate how African American fraternal groups played key roles in the struggle for civil rights and racial integration. Between the 1890s and the 1930s, white legislatures passed laws to outlaw the use of important fraternal names and symbols by blacks. But blacks successfully fought back. Employing lawyers who in some cases went on to work for the NAACP, black fraternalists took their cases all the way to the Supreme Court, which eventually ruled in their favor. At the height of the modern Civil Rights movement in the 1950s and 1960s, they marched on Washington and supported the lawsuits through lobbying and demonstrations that finally led to legal equality. This unique book reveals a little-known chapter in the story of civic democracy and racial equality in America.

Theda Skocpol is the Victor S. Thomas Professor of Government and Sociology at Harvard University. Ariane Liazos received her Ph.D. in history from Harvard and is currently an independent scholar. Marshall Ganz is lecturer in public policy at Harvard's Kennedy School of Government.

"Heavily researched and illuminating throughout, this unique study is not necessarily a book for the masses, but for those, mostly in academia, interested in examining a little-considered dimension in the complex history of the civil rights movement, and out civil society as a whole."—Publishers Weekly

"I count myself as reasonably knowledgeable of black history, but I was almost entirely ignorant of the African American fraternal tradition and its surprising links to the broader freedom struggle. So what a joy it was to read this book. In resurrecting the history of this submerged tradition, the authors have performed a valuable service for all of us interested in the organizational experience of African Americans."—Douglas McAdam, Stanford University

"Long before the twentieth-century Civil Rights movement, the fraternal and sororal organizations of the black community created and recreated sacred spaces of community solidarity and civic courage in the best spirit of American democracy. The authors convert this little-known story into an important chapter of the history of the United States."—Lani Guinier, Harvard Law School

"This valuable study enriches our understanding of the rich fraternal tradition among blacks—alongside those of other Americans—and helps us envision the civic foundations for new efforts to deepen American democracy."—Cornel West, Princeton University, author of Democracy Matters and coauthor of The African-American Century

"This book will instantly become a standard work and the basis for new research by other scholars in a variety of disciplines."—David Fahey, Miami University of Ohio

"An extraordinary work of historical reconstruction. Skocpol, Liazos, and Ganz have mounted a powerful argument, based on a remarkable collection of data, about the importance for American democracy of the rise, decline, and structure of African American civic membership associations."—Robert C. Lieberman, Columbia University, author of Shaping Race Policy