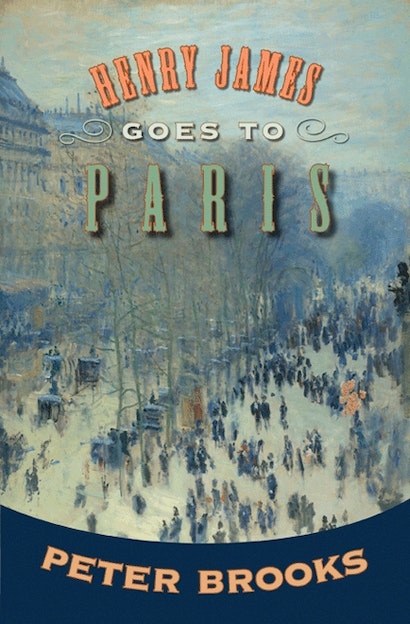 Henry James’s reputation as The Master is so familiar that it’s hard to imagine he was ever someone on whom some things really were lost. This is the story of the year — 1875 to 1876 — when the young novelist moved to Paris, drawn by his literary idols living at the center of the early modern movement in art. As Peter Brooks skillfully recounts, James largely failed to appreciate or even understand the new artistic developments teeming around him during his Paris sojourn. But living in England twenty years later, he would recall the aesthetic lessons of Paris, and his memories of the radical perspectives opened up by French novelists and painters would help transform James into the writer of his adventurous later fiction. A narrative that combines biography and criticism and uses James’s writings to tell the story from his point of view, Henry James Goes to Paris vividly brings to life the young American artist’s Paris year — and its momentous artistic and personal consequences.


James’s Paris story is one of enchantment and disenchantment. He initially loved Paris, he succeeded in meeting all the writers he admired (Turgenev, Flaubert, Zola, Maupassant, Goncourt, and Daudet), and he witnessed the latest development in French painting, Impressionism. But James largely found the writers disappointing, and he completely misunderstood the paintings he saw. He also seems to have fallen in and out of love in a more ordinary sense — with a young Russian aesthete, Paul Zhukovsky. Disillusioned, James soon retreated to England — for good. But James would eventually be changed forever by his memories of Paris.

Peter Brooks is the Mellon Visiting Professor at Princeton University. He is the author of many works of literary criticism, including Reading for the Plot, The Melodramatic Imagination, Psychoanalysis and Storytelling, Troubling Confessions, and Realist Vision. He has also published a novel, World Elsewhere (Simon & Schuster).

"In this affectionate study, Brooks concedes that the young James 'missed the point, completely,' but argues that what he observed in Paris deeply affected him, and was especially crucial to his late novels."—The New Yorker

"Brooks's main thesis is that when James lived in Paris he 'missed' much that was new and exciting. He didn't really like Flaubert's writing, he dismissed the Impressionists, and he found Wagner's music 'boring.' But twenty or more years later, Brooks argues, what James failed to appreciate at the time came back to haunt him and to affect his later great work. Though James was more of a Romantic realist in the tradition of Balzac (with a large taste for melodramatic kitsch and wild and improbable plot twists), he came to appreciate Flaubert's exquisite style and measured realism and to write several important essays on him."—Edmund V. White, New York Review of Books

"Peter Brooks has produced a brilliant and accessible account of a young American landing in Paris and missing the point. In Henry James Goes to Paris . . . Mr. Brooks shows how James' year in the City of Light—1875 to 1876—left him in the dark, baffled about the French avant-garde."—New York Observer

"In the autumn of 1875, Henry James arrived in Paris . . . yet, a little more than a year later, he left for London, disappointed and disenchanted. In this masterly critique, Peter Brooks reveals why, and why also it would prove in time to be one of the most important years of his life. . . . With skill and sensitivity and unusual readability, Brooks reveals how, as James matured . . . he came to admire the passion and commitment, if not the work, of these men."—Anne Haverty, Irish Times

"A brilliant study of how James's experiences that year lay repressed for two decades in what the novelist called 'the deep well of unconscious cerebration', before he transformed his style. Or, as Brooks, who is one of America's finest literary critics, puts it, how James 'missed much of what he experienced—but missed it, I think, only for the time being.'"—Frances Wilson, The Daily Telegraph

"In his fascinating new study, Henry James Goes to Paris . . . Peter Brooks . . . gives a detailed account of the year James spent there, a year that would shape him forever. . . . Mr. Brooks weaves together episodes from James's year in Paris with his novels, from Roderick Hudson onward, to make plain how painstakingly James absorbed the lessons of the masters even as he seemed to repudiate them."—Eric Ormsby, The New York Sun

"Peter Brooks is an engaging, lucid writer with a marvelous intuitive grasp of Jamesian complexities and a rare gifting for integrating biography, history, gossip and literary criticism."—David Laskin, Seattle Times

"In Brooks' excellent account of [James's] time in Paris we can begin to understand how the Balzacian disciple became the Master of the novel we know and still love to read today."—Book Depository

"This is a perceptive and well-finessed account of the novelist's growth, enlivened by several lightnesses of touch . . . and James should feel well served."—Ian F. A. Bell, Modern Language Review

"Unsurpassed as a James reader, Brooks grounds his larger argument in penetrating analyses of not only What Maisie Knew and The Golden Bowl but of two early signposts of James' development, The American and The Tragic Muse. These readings will surely lend new stature, and generate new interest, in all these novels."—David M. Robinson, American Literary Realism

"[A] rich and subtly presented case. . . . Henry James Goes to Paris explores the intersection of narrative and criticism, using an explanatory hypothesis of James's development to frame a series of perceptive critical readings."—John Attridge, Modernism/modernity

"Under the guise of simply 'telling a story' about the young Henry James's stay in Paris in 1875-76, Peter Brooks describes the progressive emergence of the whole of novelistic modernity during the turn from the nineteenth to the twentieth century. You have to be, like Brooks, both historian and theorist, a scholar both of things French and American, to so masterfully carry out this project."—Philippe Hamon, Professor Emeritus, La Sorbonne Nouvelle

"Henry James Goes to Paris is a delight to read. Peter Brooks writes with much grace and with an intimate knowledge of James's novels and of the French masters (Flaubert, the Goncourt brothers, Zola) James came to know during his stay in Paris in 1875-76. The central theme of this wide-ranging and original study is James's early misunderstanding and even misreading of the French avant-garde writers that in time, however, contributed to his mature vision of the art of the novel. Brooks treats his subject with much subtlety, solid scholarship, and flexibility of mind."—Victor Brombert, author of Trains of Thought

"This critical narrative about James's relations with Paris and the circle of writers he encountered when he took up residence there in 1875 is a great pleasure to read. What makes it especially attractive is the fact that Brooks relies so heavily on primary documents. We have the illusion of learning about James directly, often in his own words. Most people today do not read criticism. They read narrative, and that's why biography is so popular. Yet to the degree that criticism can find a narrative form, it will find readers outside a narrow range of specialists. I expect this book to do that."—Michael Gorra, author of The Bells in Their Silence: Travels through Germany

"This is a thoroughly well-crafted, nuanced, and very Jamesian story about cross-cultural contact, modernity, and how one fine mind assimilated the most advanced (if not necessarily the 'best') artistic theories of his day. The result is a live picture of a crucial moment in the development of the novel."—Nicholas Dames, Columbia University