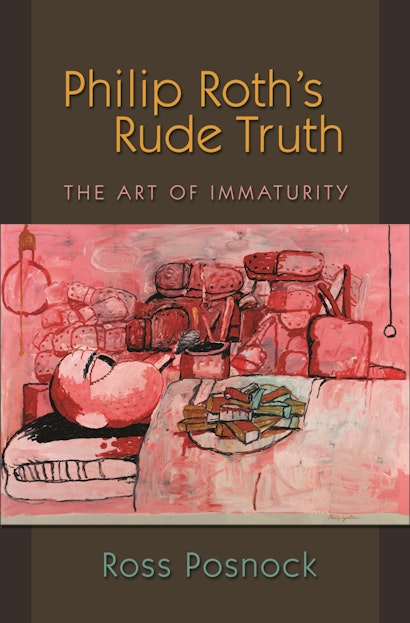 Has anyone ever worked harder and longer at being immature than Philip Roth? The novelist himself pointed out the paradox, saying that after establishing a reputation for maturity with two earnest novels, he “worked hard and long and diligently” to be frivolous — an effort that resulted in the notoriously immature Portnoy’s Complaint (1969). Three-and-a-half decades and more than twenty books later, Roth is still at his serious “pursuit of the unserious.” But his art of immaturity has itself matured, developing surprising links with two traditions of immaturity — an American one that includes Emerson, Melville, and Henry James, and a late twentieth-century Eastern European one that developed in reaction to totalitarianism. In Philip Roth’s Rude Truth — one of the first major studies of Roth’s career as a whole — Ross Posnock examines Roth’s “mature immaturity” in all its depth and richness.

Philip Roth’s Rude Truth will force readers to reconsider the narrow categories into which Roth has often been slotted — laureate of Newark, New Jersey; junior partner in the firm Salinger, Bellow, Mailer, and Malamud; Jewish-American regionalist. In dramatic contrast to these caricatures, the Roth who emerges from Posnock’s readable and intellectually vibrant study is a great cosmopolitan in the tradition of Henry James and Milan Kundera.

Ross Posnock is Professor of English at Columbia University, where he also teaches American Studies. His books include The Trial of Curiosity: Henry James, William James, and the Challenge of Modernity; Color and Culture: Black Writers and the Making of the Modern Intellectual; and The Cambridge Companion to Ralph Ellison.

"The present title offers a sophisticated, original vision and is a fine addition to the excellent body of critical material available on this significant prolific novelist. . . . Highly recommended."—Choice

"Ross Posnock's study may be the most intellectually complex as well as fiercely independent study of Roth's career to date. Filled with deft observations, [Posnock] offers authoritative readings of literature and society which have profound implications that exceed considerations of Roth, its ostensible solitary subject."—Ranen Omer-Sherman, Modernism/modernity

"A very learned and stimulating critique of Philip Roth's fiction.... Ross Posnock has written one of the three best books on Philip Roth—if not the best.... He treats Roth's work as it deserves to be regarded, especially since no one as yet has adequately traced its roots to the major traditions of American literature."—Jay L. Halio, Shofar

"In this complex and stimulating book, Ross Posnock . . . rethinks the career of American novelist Philip Roth. . . . Posnock places Roth within a cosmopolitan community of authors ranging from Melville to Salinger who have rejected the separation of mind and body in favor of an aesthetic that rejects the very idea of knowing oneself. . . . Posnock has written an excellent book of criticism, exploring not just Roth, but also literature that emerged mid-century with roots in a long tradition of American and European art."—Peter Terry, ForeWord

"Ross Posnock's meditation upon Philip Roth is the best literary criticism yet afforded to our foremost novelist since Faulkner. Roth emerges from this study as a major American novelist in a literary tradition that goes back to Emerson and Henry James. Posnock clearly defines the writer whose heartening motto is: 'We are here to be insulted.' One of Roth's favorite adages is Heine's: 'There is a God and his name is Aristophanes.'"—Harold Bloom, literary critic

"Far and away the most astute and nuanced account we have or likely to have for many years to come, of Roth's emergence as an unrivalled master of irony and irreverence—a rhapsodic genius most alive when provoking moralists and liberationists alike. No critic has made a better case for Roth's place among the classic writers of the nation and the world."—Eric J. Sundquist, University of California, Los Angeles

"Ross Posnock takes a familiar figure, on whom rivers of ink have been spilt, and completely reorients the critical context for an understanding of his work. His book gives us a powerful and original perspective on Roth, placing him in the mainstream of American literature from Emerson and Whitman to Ellison. Rightly emphasizing his later books, Posnock sees him as an antinomian writer, ruthless, outrageous, mind-bendingly complex yet deeply consistent."—Morris Dickstein, Graduate Center of the City University of New York

"Philip Roth is arguably one of the two or three most important writers in America today, and Ross Posnock's book is a superlative achievement fully worthy of its subject. It is a masterful work of literary and cultural criticism. I loved reading it, and will return to it frequently for exhilaration and enlightenment. I have not the slightest doubt that many other readers will share my enthusiasm."—Michael Gilmore, Brandeis University