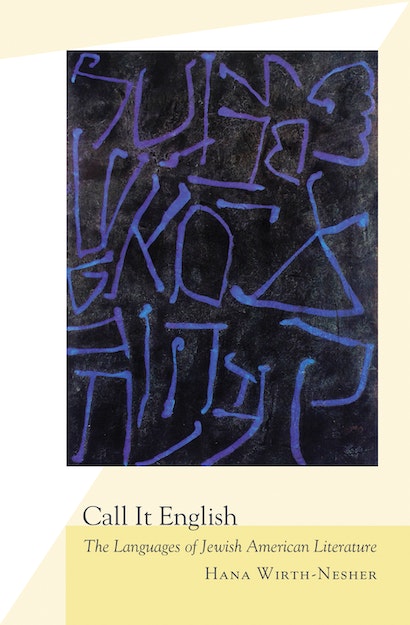 Call It English identifies the distinctive voice of Jewish American literature by recovering the multilingual Jewish culture that Jews brought to the United States in their creative encounter with English. In transnational readings of works from the late-nineteenth century to the present by both immigrant and postimmigrant generations, Hana Wirth-Nesher traces the evolution of Yiddish and Hebrew in modern Jewish American prose writing through dialect and accent, cross-cultural translations, and bilingual wordplay.

Call It English tells a story of preoccupation with pronunciation, diction, translation, the figurality of Hebrew letters, and the linguistic dimension of home and exile in a culture constituted of sacred, secular, familial, and ancestral languages. Through readings of works by Abraham Cahan, Mary Antin, Henry Roth, Delmore Schwartz, Bernard Malamud, Saul Bellow, Cynthia Ozick, Grace Paley, Philip Roth, Aryeh Lev Stollman, and other writers, it demonstrates how inventive literary strategies are sites of loss and gain, evasion and invention.


The first part of the book examines immigrant writing that enacts the drama of acquiring and relinquishing language in an America marked by language debates, local color writing, and nativism. The second part addresses multilingual writing by native-born authors in response to Jewish America’s postwar social transformation and to the Holocaust.


A profound and eloquently written exploration of bilingual aesthetics and cross-cultural translation, Call It English resounds also with pertinence to other minority and ethnic literatures in the United States.

Hana Wirth-Nesher is the Samuel L. and Perry Haber Chair on the Study of the Jewish Experience in the United States, Professor of English, and head of the Goldreich Family Institute for Yiddish Language, Literature, and Culture at Tel Aviv University. She is the author of City Codes: Reading the Modern Urban Novel and the editor of What is Jewish Literature?, and coeditor of The Cambridge Companion to Jewish American Literature.

"[An] invigorating book about the multilingual sensibility which Jews who emigrated to the United States brought to their grappling with English. . . . This is not just a book about the Jewish American experience, but about how and why we all relate to language."—Samantha Ellis, Times Literary Supplement

"No book traces the stories of Jewish sound, voice, tone, pun, metaphor, name, prayer, and sacred syllable with such consistency and brilliance."—Choice

"Call It English is a deeply informed and provocative attempt to explain the uniqueness of Jewish American multilingualism, and as such, it should be required reading for anyone teaching a course on Jewish American literature."—Steven Fink, American Jewish History

"Call It English . . . [is an] important book for scholars of both American literatures and American Jewish literature, and . . . [is] so especially at this particular point in history. . . . [T]he ever-increasing passage of time that separates us from the events of the Holocaust and the inevitable if not deeply regrettable failures of memory make it all the more imperative that we bear witness to the past."—Contemporary Literature

"Her work opens new doors for a reconsideration of the national and linguistic boundaries of American literature, long a literature of immigrants—immigrants who continue to bring their languages and literary traditions to bear on the history of American letters."—Dr. Allison Schachter, Pesach

"Call It English is an extraordinary book that will force a revision of our understanding of English-language Jewish American literature from the perspective of multilingualism. Cogently argued and vividly written, it offers a substantially new approach to the field and fresh and compelling readings of major authors from Abraham Cahan to Philip Roth."—Werner Sollors, Harvard University, author of Neither Black Nor White Yet Both: Thematic Explorations of Interracial Literature

"A book, as its author says, about forgetting and remembering, Call It English takes us on a marvelous journey into different territories of fiction, above all those where writing and identity struggle to survive and make themselves new. In this perspective Jewish American writing appears as both more various and more continuous than we have thought, and if we continue to call its dominant idiom English we shall do so now in full awareness of the many lives and languages that are hiding in that name."—Michael Wood, Princeton University, author of The Road to Delphi and The Magician's Doubts (Princeton)

"This is simply a stunning book, and it is the book that Hana Wirth-Nesher's life experience and intellectual formation have meant her to write. There is no other student of American Jewish literature who possesses the tools and scholarly rigor to take on this topic, and there is no one else who delivers as abundantly on this promise. What at first seems peripheral or vestigial or even pedantic—the uses of Hebrew and Yiddish in American Jewish literature—is shown in a completely persuasive argument to turn to be of the first importance. In that sense, the book is path-breaking and will rewrite the map of the field."—Alan Mintz, Chana Kekst Professor of Hebrew Literature, Jewish Theological Seminary

"Call It English makes a rich, comprehensive, and welcome contribution not only to the study of American Jewish literature but more broadly to our understanding of the evolution of transnational, multicultural American history. It is unlike any other critical work on American Jewish literature. Given her command of Yiddish and Hebrew, as well as her deep familiarity with American literature generally and American Jewish literature in particular, Wirth-Nesher is unusually well-positioned, and she has made the most of her scholarly and analytical skills in a book that is original from start to finish."—Eric J. Sundquist, University of California, Los Angeles, author of To Wake the Nations: Race in the Making of American Literature