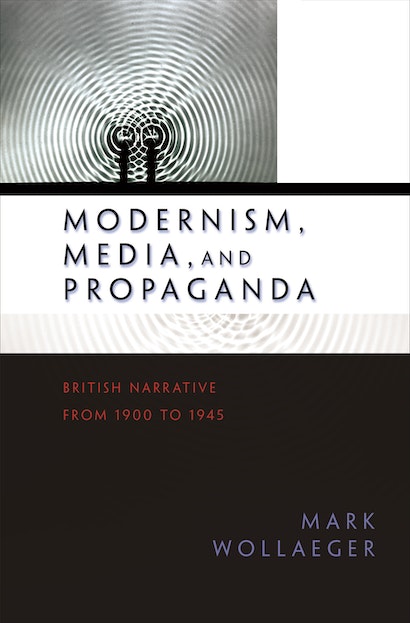 Though often defined as having opposite aims, means, and effects, modernism and modern propaganda developed at the same time and influenced each other in surprising ways. The professional propagandist emerged as one kind of information specialist, the modernist writer as another. Britain was particularly important to this double history. By secretly hiring well-known writers and intellectuals to write for the government and by exploiting their control of new global information systems, the British in World War I invented a new template for the manipulation of information that remains with us to this day. Making a persuasive case for the importance of understanding modernism in the context of the history of modern propaganda, Modernism, Media, and Propaganda also helps explain the origins of today’s highly propagandized world.

Modernism, Media, and Propaganda integrates new archival research with fresh interpretations of British fiction and film to provide a comprehensive cultural history of the relationship between modernism and propaganda in Britain during the first half of the twentieth century. From works by Joseph Conrad to propaganda films by Alfred Hitchcock and Orson Welles, Mark Wollaeger traces the transition from literary to cinematic propaganda while offering compelling close readings of major fiction by Virginia Woolf, Ford Madox Ford, and James Joyce.

Mark Wollaeger is professor of English at Vanderbilt University. He is the author of Joseph Conrad and the Fictions of Skepticism, the editor of James Joyce's "A Portrait of the Artist as a Young Man": A Casebook, and coeditor of Joyce and the Subject of History.

"Wollaeger gives [the debate about art's relationship to propaganda] new purchase by stressing the emergence of modern propaganda . . . and by showing how the last century's propaganda outlets served as both a testing ground and a charger, a model, and a spur, for modernist innovation. . . . Modernism can help us resist propaganda today, Wollaeger suggests smartly, not because it has always kept its distance but because, from the beginning, it absorbed propaganda's tricks."—Rebecca L. Walkowitz, Modernism/Modernity

"Mark Wollaeger's sophisticated new book adds to the recent reshaping of our understanding of modernist-period media culture. . . . While one would expect such tours de force from Wollaeger, who is known for his work on Conrad and Joyce, it is his chapter on Ford Madox Ford that proves to be the volume's intellectual center."—Debra Rae Cohen, Clio

"While many critical studies of British literary modernism promise to reveal new ways to contextualize modernism, few deliver with such accomplished originality as Mark Wollaeger's Modernism, Media, and Propaganda. . . . Wollaeger's book is a model of exemplary scholarship that . . . aptly speaks to our historical moment."—Lissa Schneider, James Joyce Literary Supplement

"Mark Wollaeger's Modernism, Media, and Propaganda: British Narrative from 1900 to 1945 is written in an approachable style with an engaging and often amusing personal voice. . . . This is a book in which the historical contextualising so in trend at the present time is allowed to sit comfortably and rewardingly beside more 'traditional' close readings of canonical works."—Ayako Yoshino, Studies in English Literature

"A carefully researched monograph, Modernism, Media, and Propaganda will likely appeal to those interested in historicist and close textual analyses, and perhaps less to those seeking more theoretical treatments of modernist prose and film."—David Tomkins, European Legacy

"Modernism, Media, and Propaganda is a rich and nuanced study of how modernism and propaganda were formed symbiotically as much as defined by difference."—Elizabeth F. Evans, Woolf Studies Annual

"This book has everything. It is scrupulously researched, lucidly and appealingly written, interdisciplinary in the most rigorous sense, thickly historicized, and forcefully argued."—Garrett Stewart, University of Iowa

"The thesis of Modernism, Media, and Propaganda is original and Mark Wollaeger's readings in support of it are thorough, ingenious, and illuminating. This is an original, persuasive, and authoritative study."—Michael North, University of California, Los Angeles