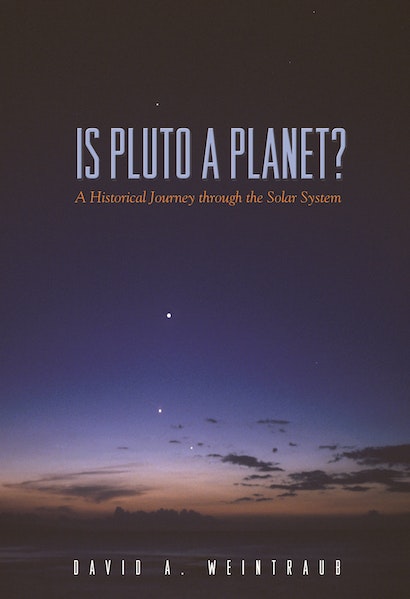 A Note from the Author: On August 24, 2006, at the 26th General Assembly of the International Astronomical Union (IAU) in Prague, by a majority vote of only the 424 members present, the IAU (an organization of over 10,000 members) passed a resolution defining planet in such a way as to exclude Pluto and established a new class of objects in the solar system to be called “dwarf planets,” which was deliberately designed to include Pluto.

With the discovery of Eris (2003 UB313)—an outer solar system object thought to be both slightly larger than Pluto and twice as far from the Sun—astronomers have again been thrown into an age-old debate about what is and what is not a planet. One of many sizeable hunks of rock and ice in the Kuiper Belt, Eris has resisted easy classification and inspired much controversy over the definition of planethood. But, Pluto itself has been subject to controversy since its discovery in 1930, and questions over its status linger. Is it a planet? What exactly is a planet?

Is Pluto a Planet? tells the story of how the meaning of the word “planet” has changed from antiquity to the present day, as new objects in our solar system have been discovered. In lively, thoroughly accessible prose, David Weintraub provides the historical, philosophical, and astronomical background that allows us to decide for ourselves whether Pluto is indeed a planet.

The number of possible planets has ranged widely over the centuries, from five to seventeen. This book makes sense of it all—from the ancient Greeks’ observation that some stars wander while others don’t; to Copernicus, who made Earth a planet but rejected the Sun and the Moon; to the discoveries of comets, Uranus, Ceres, the asteroid belt, Neptune, Pluto, centaurs, the Kuiper Belt and Eris, and extrasolar planets.

Weaving the history of our thinking about planets and cosmology into a single, remarkable story, Is Pluto a Planet? is for all those who seek a fuller understanding of the science surrounding both Pluto and the provocative recent discoveries in our outer solar system.

David A. Weintraub is Professor of Astronomy at Vanderbilt University, which in 2003 honored him with the Jeffrey Nordhaus Award for Excellence in Undergraduate Teaching.

"David Weintraub sets the debate in its full context, and his views will be of interest to anyone who wants to know how our view of the universe around us has changed over time."—Martin Ince, Times Higher Education Supplement

"Vanderbilt astronomer Weintraub places the Pluto controversy in context in his judicious, lively account of the development of our solar system and the evolution of the meaning of the word planet. . . . Weintraub effectively shows that Pluto is a planet by most definitions, but so are several other objects in the Kuiper asteroid belt. Weintraub's provocative, engaging study points to the richness and complexity of our solar system and its many possible planets."—Publishers Weekly

"Well told. . . . "Is Pluto a Planet?" . . . provides a readable historical account of our knowledge of the Solar System and the concept of what has been considered to be a planet. . . . Towards the end of this interesting book, Weintraub surprisingly concludes, despite the close analogy between the discovery of the asteroid and Kuiper belts, that we should retain Pluto as a planet by using three physical parameters of orbital characteristics, mass and roundness."—Stuart Ross Taylor, Nature

"Weintraub discusses how the concept of planet has changed. He describes the rises and falls in the number of planets recognized in our solar system—changes that lead him to term Pluto 'the fourth ninth planet.' Although readers may not accept Weintraub's answer to the titular question, they will find his thought-provoking account provides ample information for supporting a variety of positions in the continuing debate."—Science

"A fascinating, accessible, and eminently readable historical introduction to the development of the planetary ideal."—David W. Hughes, Observatory

"This book takes a sensible historical (rather than hysterical) perspective. . . . Is Pluto a Planet? is a comprehensive and desperately needed exploration of the subject and accessible to those without a prior knowledge of astronomy."—Steve Ringwood, Astronomy Now

"Few topics in planetary science have ignited as much public debate and outright acrimony as the recent decision by the International Astronomical Union to revoke Pluto's planetary status...This kind of fervor makes David A. Weintraub's Is Pluto a Planet? particularly timely in that it provides some much-needed perspective on the battle over the meaning of the term 'planet,' a battle that, as we often forget, has been going on as long as astronomy itself...[T]here is much to recommend in Is Pluto a Planet? Weintraub's history of the term 'planet' is well told and interesting, and the narrative successfully walks readers through many of the pros and cons of different planet definitions. It puts the current debate into context and demonstrates how the acceptance of the new over the old in astronomy is driven or deterred as much by human foibles as by new information."—William F. Bottke, Physics Today

"David W. Weintraub's Is Pluto a Planet? A Historical Journey through the Solar System . . . traces the history of how 'planet' has been defined over the centuries."—Library Journal Book Blog

"Its status ambiguous ever since its discovery in 1930, hapless Pluto received an insult to its dignity when the International Astronomical Union (IAU) demoted it from planethood in August 2006. Weintraub, though, will not be stampeded as he methodically considers the historically evolving definitions of a planet. . . . His survey of planetary discovery in hand, Weintraub delivers his answer to the title's question to cap an accessible, informative presentation of planetary astronomy."—Gilbert Taylor, Booklist

"Is Pluto a Planet? is . . . [an] exceptional new book. . . .The writing is both lively and precise, conveying both historical detail and scientific explanation in clear, understandable terms. His style respects the reader's intelligence without being either didactic or superior, and the exploration of discovery remains compelling chapter after chapter."—Howard Shirley, BookPage

"Weaving the history of our thinking about planets and cosmology into a single, remarkable story, this book is for all those who seek a fuller understanding of the science surrounding both Pluto and the provocative recent discoveries in our outer solar system."—Lunar and Planetary Information Bulletin

"This excellent exploration of the history of planetary astronomy provides readers with enough information to attempt their own answer. The IAU will undoubtedly consider the definition of planet in 2009; all those voting in 2006 should have considered the issues in this book. . . . Highly recommended."—Choice

"Weintraub argues that Pluto, and many of those objects, should be called planets. He lost that argument, but that doesn't take away from the book. He lays out in clear details the history of the discovery of the solar system. He discusses the mathematics in clear and concise detail so we don't get lost. And he covers all the arguments and gives a clear picture of learned humans struggling to understand the world around them."—Terry England, Santa Fe New Mexican

"Students and friends used to ask, 'What do you really know about UFOs?' Now they ask, 'What about Pluto?' Weintraub explains not only how such things are decided, but also how we have come to understand the structure of our solar system....For an investment in a well-written solar system and intellectual history, we recommend Is Pluto a Planet?"—Bruce L. Dietrich, Planetarian

"The author concentrates on providing a detailed historical background to the Pluto issue by tracing the way our view of what constitutes a planet has evolved since the Mayans and the Babylonians began to observe the heavens. . . . Readers who enjoy immersing themselves in the history of astronomy, however many times they've read of Aristotle, Copernicus, and Kepler, will like this book."—Mark Williamson, Space Times

"No matter which side of the debate you find yourself on, Is Pluto a Planet? will equip you with all the information you need to win your argument. And along the way, David Weintraub treats you to a fascinating tour of the past, present, and future of our attempts to understand the solar system and our place within it."—Neil deGrasse Tyson, Astrophysicist at the American Museum of Natural History and Director of the Hayden Planetarium, New York City

"Is Pluto a planet? Sure it is. But is it a major planet like Mars and Jupiter, or is that distant tiny body more in league with Ceres, long ago catalogued as the first and largest of the minor planets? What degree of 'planethood' should be conferred on an object orbiting a star—too small to be a star itself, yet big enough to be round? With these stimulating questions (and more) in mind, I fully support Weintraub's conclusion that our youngsters get short shrift by learning only a simple mnemonic aid when introduced to the planets around our sun."—Brian G. Marsden, Harvard-Smithsonian Center for Astrophysics

"David Weintraub tells a coherent tale with an ingenious story line. Well written and convincingly presented, Is Pluto a Planet? will appeal widely to general readers. It covers a topic that has exploded in the past decade, but I do not know of any other popular account of the outer solar system."—Owen Gingerich, Harvard-Smithsonian Center for Astrophysics, author of The Book Nobody Read: Chasing the Revolutions of Nicolaus Copernicus

"General readers interested in the Pluto controversy will find much of interest in this book, which shows how the concept of 'planet' has evolved throughout history. As a professional interested in this topic, I found the historical narrative quite illuminating and useful."—Gibor Basri, University of California, Berkeley and Co-Investigator, NASA's Kepler Mission