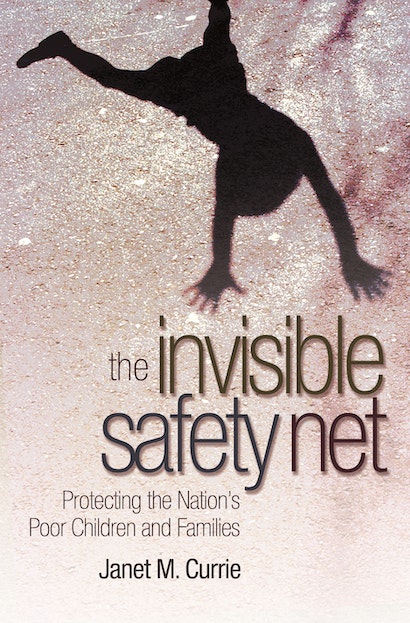 In one of the most provocative books ever published on America’s social welfare system, economist Janet Currie argues that the modern social safety net is under attack.


Unlike most books about antipoverty programs, Currie trains her focus not on cash welfare, which accounts for a small and shrinking share of federal expenditures on poor families with children, but on the staples of today’s American welfare system: Medicaid, Food Stamps, Head Start, WIC, and public housing. These programs, Currie maintains, form an effective, if largely invisible and haphazard safety net, and yet they are the very programs most vulnerable to political attack and misunderstanding.


This book highlights both the importance and the fragility of this safety net, arguing that, while not perfect, it is essential to fighting poverty. Currie demonstrates how America’s safety net is threatened by growing budget deficits and by an erroneous public belief that antipoverty programs for children do not work and are riddled with fraud.


By unearthing new empirical data, Currie makes the case that social programs for families with children are actually remarkably effective. She takes her argument one step further by offering specific reforms — detailed in each chapter — for improving these programs even more. The book concludes with an overview of an integrated safety net that would fight poverty more effectively and prevent children from slipping through holes in the net. (For example, Currie recommends the implementation of a benefit “debit card” that would provide benefits with less administrative burden on the recipient.)


A complement to books such as Barbara Ehrenreich’s bestselling Nickel and Dimed, which document the personal struggles of the working poor, The Invisible Safety Net provides a big-picture look at the kind of programs and solutions that would help ease those struggles. Comprehensive and authoritative, it will prompt a major reexamination of the current thinking on improving the lives of needy Americans.

Janet M. Currie is chair of the economics department at Columbia University, a research associate at the National Bureau of Economic Research, and a member of the advisory board of the National Children's Study.

"Currie's book . . . is engaging and free of both jargon and ideology. . . . [S]he has laid out a reform agenda that could guide modern-day Moynihans in their fight against political pressure to sacrifice the safety net on the altar of national security."—Michael Brus, RealChangeNews.org

"In-kind programs have long been neglected in discussions of the welfare system in the United States. . . . At a time when funding and other support for public assistance is shrinking, [Currie] contends, the profile of this safety net must be raised, lest it be dismantled before its importance is realized."—Education Week

"[Janet Currie] offers specific reforms for improving . . . [anti-poverty] programs . . . and concludes with an overview of an integrated safety net that would fight poverty more effectively and prevent children from slipping through holes in the net."—International Social Security Review

"Currie has performed a commendable service to readers of multiple disciplines. This volume traces changes to the welfare system as it issues a warning about the potential for undercutting the ability of poor children and families to thrive and develop as the welfare system is transformed. [This book] provides a wonderful primer on public policy for psychologists and others who are interested in the welfare of children and families."—Michael B. Blank and Marlene M. Eisenberg, PsycCRITIQUES

"Currie's book will never be mistaken for beach reading. But it is engaging and free of both jargon and ideology."—Michael Brus, Big Issue in the North

"There is no one who can compare with Janet Currie in thinking about programs for the poor. Her views need to be taken very seriously."—David M. Cutler, Otto Eckstein Professor of Applied Economics and Dean for the Social Sciences, Harvard University, author of Your Money or Your Life: Strong Medicine for America's Health Care System

"This book is a must for all who are interested in improving the lives of children growing up in adversity. Its depth of scholarship documents how the 'invisible safety net' of programs in medical care, nutrition, housing, and early child care and preschool education have improved the lives of children and families even as welfare programs were being reduced. The author is analytic and incisive; the scholarship is impressive. This is a very creative approach to dealing with one of our society's basic problems."—Julius B. Richmond, MD, Harvard University, author of The Health Care Mess: How We Got Into It and What It Will Take To Get Out

"This book provides a clear summary of how key U.S. antipoverty programs operate, with evidence on what they do (and don't) accomplish. It's a book that any policy analyst with an interest in poverty should have on the shelf."—Rebecca M. Blank, University of Michigan, author of It Takes a Nation

"An extraordinarily important and well written book with an impeccable synthesis of the most credible existing research."—David Zimmerman, Williams College