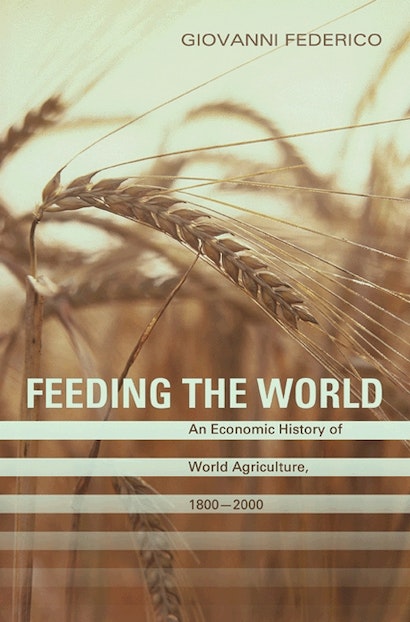 In the last two centuries, agriculture has been an outstanding, if somewhat neglected, success story. Agriculture has fed an ever-growing population with an increasing variety of products at falling prices, even as it has released a growing number of workers to the rest of the economy. This book, a comprehensive history of world agriculture during this period, explains how these feats were accomplished.

Feeding the World synthesizes two hundred years of agricultural development throughout the world, providing all essential data and extensive references to the literature. It covers, systematically, all the factors that have affected agricultural performance: environment, accumulation of inputs, technical progress, institutional change, commercialization, agricultural policies, and more. The last chapter discusses the contribution of agriculture to modern economic growth. The book is global in its reach and analysis, and represents a grand synthesis of an enormous topic.

Giovanni Federico is Professor of Economic History at the European University Institute. He has written extensively on Italian and comparative economic history, with special attention on agriculture, trade, and trade policy. He is the author of An Economic History of the Silk Industry and the coauthor of The Growth of the Italian Economy, 1820-1940.

"In Feeding the World, Giovanni Federico considers agricultural development over the past 200 years an outstanding success story. . . . Feeding the World will be of great interest to economists, development specialists and policymakers, and all economic historians should read it. Methodologically, it is an excellent example of a quantitative economic history, grounded in theory but sensitive to empirical realities worldwide. Substantively, it provides an essential context for understanding economic development over the past 200 years on a global scale."—Mark Overton, Times Higher Education Supplement

"This book provides everything that a mainstream economic history or agricultural history course would want to cover. . . . [T]he book [is] . . . useful and highly recommended."—Thomas R. DeGregori, Journal of Economic Issues

"The range, stance, and clarity of this hugely impressive book make it ideally suited to classroom use at advanced undergraduate or graduate level. It deserves to be widely read, in university libraries and beyond."—Cormac Ó Gráda, Agricultural History Review

"Giovannia Federico should be congratulated for his efforts in providing what is clearly an impressive synthesis, constituting a significant contribution to our understanding of the changing role and the revolution that has taken place in agricultural production since 1800. It will appeal to a wide readership, encompassing not only the academic community but also lay readers who are interested in how feeding the industrially advanced countries of the world has been successfully achieved."—John Martin, The Historian

"I recommend this book for those who want to gain a general understanding of the dynamics of world agriculture and who are looking for scientific texts in the field. The rich bibliography can satisfy many people's curiosity in this respect."—Walter Leimgruber, European Legacy

"This book does more than any other work to bring together economic history and current day issues of policy, particularly in developing countries. It is useful not just for readers in economic history, but in other areas of economics, sociology, and even political science."—Philip T. Hoffman, California Institute of Technology

"In the past two centuries, farm production has grown faster than the population, so we now produce enough food to abolish hunger around most of the globe. Federico has done a monumental job in documenting the growth of agricultural output, inputs, and productivity on a world scale. This book will be of great interest to all those interested in the interplay between humanity and the natural environment, as well as to historians, development specialists, and policy makers."—Robert Allen, University of Oxford