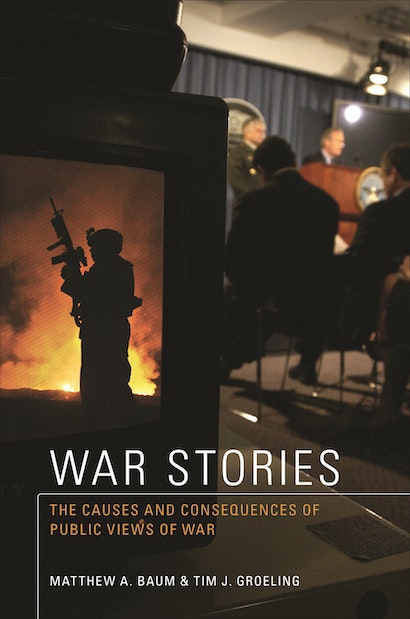 How does the American public formulate its opinions about U.S. foreign policy and military engagement abroad? War Stories argues that the media systematically distort the information the public vitally needs to determine whether to support such initiatives, for reasons having more to do with journalists’ professional interests than the merits of the policies, and that this has significant consequences for national security. Matthew Baum and Tim Groeling develop a “strategic bias” theory that explains the foreign-policy communication process as a three-way interaction among the press, political elites, and the public, each of which has distinct interests, biases, and incentives.


Do media representations affect public support for the president and faithfully reflect events in times of diplomatic crisis and war? How do new media — especially Internet news and more partisan outlets — shape public opinion, and how will they alter future conflicts? In answering such questions, Baum and Groeling take an in-depth look at media coverage, elite rhetoric, and public opinion during the Iraq war and other U.S. conflicts abroad. They trace how traditional and new media select stories, how elites frame and sometimes even distort events, and how these dynamics shape public opinion over the course of a conflict.


Most of us learn virtually everything we know about foreign policy from media reporting of elite opinions. In War Stories, Baum and Groeling reveal precisely what this means for the future of American foreign policy.

Matthew A. Baum is the Marvin Kalb Professor of Global Communications and professor of public policy and government at Harvard University. Tim J. Groeling is associate professor of communication studies at the University of California, Los Angeles.

"In this landmark study, Baum and Groeling reveal how foreign policy messages are conveyed and undermined."—Lawrence D. Freedman, Foreign Affairs

"War Stories . . . makes an invaluable contribution to several literatures—politician-journalist interactions, news production, public reactions to news, foreign policymaking, and the new media. That War Stories has so much to say about so many important topics is a remarkable achievement. I learned much from this thoughtful study. It changed my thinking about a number of topics, and I recommend it to those interested in news production, communications research, public opinion, and policymaking."—Jeffrey E. Cohen, Public Opinion Quarterly

"If you're studying American foreign policy, or American media, this is an essential book that will only provide detailed arguments and information backed up by a wealth of evidence. I have no doubt that researchers will also find inspiration for further studies from some of these sections."—Stefan Fergus, Civilian Reader

"War Stories will have a major impact on how scholars think about media influences on foreign policymaking in the United States. Baum and Groeling have produced a credible, comprehensive, and consistent analysis of why journalists cover foreign policy in a skewed fashion and how this ultimately affects public opinion about conflicts such as the Iraq war."—James T. Hamilton, Duke University

"War Stories makes a significant contribution to our knowledge of how the strategic decisions of politicians, parties, and news organizations shape the information about conflicts that is conveyed to the public. Baum and Groeling contend that media rhetoric greatly influences public opinion in times of war regardless of the empirical reality such as casualties and events. This book addresses an important topic."—Diana Owen, Georgetown University