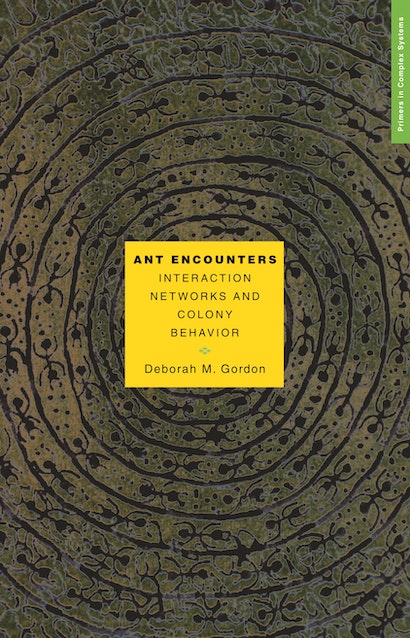 How do ant colonies get anything done, when no one is in charge? An ant colony operates without a central control or hierarchy, and no ant directs another. Instead, ants decide what to do based on the rate, rhythm, and pattern of individual encounters and interactions — resulting in a dynamic network that coordinates the functions of the colony. Ant Encounters provides a revealing and accessible look into ant behavior from this complex systems perspective.

Focusing on the moment-to-moment behavior of ant colonies, Deborah Gordon investigates the role of interaction networks in regulating colony behavior and relations among ant colonies. She shows how ant behavior within and between colonies arises from local interactions of individuals, and how interaction networks develop as a colony grows older and larger. The more rapidly ants react to their encounters, the more sensitively the entire colony responds to changing conditions. Gordon explores whether such reactive networks help a colony to survive and reproduce, how natural selection shapes colony networks, and how these structures compare to other analogous complex systems.

Ant Encounters sheds light on the organizational behavior, ecology, and evolution of these diverse and ubiquitous social insects.

Deborah M. Gordon is professor of biology at Stanford University. She is the author of Ants at Work (Norton).

"In her new book, written in a lively style and accessible to a general audience, Gordon describes the sophisticated experiments that led her to intriguing insights about how an ant colony can solve vital problems, such as finding the shortest path to the best food source, allocating workers to different tasks or defending a territory from rivals."—Times Higher Education

"This volume provides a well-focused review of how complex biological systems develop and function, with applications well beyond understanding ant colonies. It may compel behavioral and community ecologists, as well as other non-biologists, to consider new perspectives in understanding interacting systems."—Choice

"This concise, well-written book will be of interest to biologists and complexity scientists, but is written to also be accessible to non-scientists. . . . Ant Encounters is an enjoyable read, full of neat experiments and lively anecdotes illustrating the scientific points."—Elva J. H. Washington, Trends in Ecology and Evolution

"[T]he good and easy to understand introduction to the role of interaction networks in colony behavior—or ants as a natural complex system based on interactions networks—as well as the style of writing makes the book an entertaining read."—Heike Feldhaar, Basic and Applied Ecology

"Deborah Gordon has produced a delightful and scholarly introduction to ant colony organization that teaches as it entertains. Building on decades of observation, experimentation, and simulation, she convincingly demonstrates that ants form self-organized communities, in which individual tasks change dynamically as conditions and interaction networks shift. Placing her work in a historical framework that reaches from Darwin to political theory, Gordon conclusively makes the case that ant societies are model systems for the study of collective behavior."—Simon A. Levin, Princeton University

"Deborah Gordon's amazingly detailed book on the complex web of interactions in ant colonies makes fascinating reading for anyone who is curious about the world around us. And—even more interestingly from my point of view—this book provides rich fodder for understanding other kinds of collective intelligence, from neurons in the brain to human societies linked by the Internet."—Thomas W. Malone, Massachusetts Institute of Technology

"Ant societies are like—and not like—human societies. Deborah Gordon's new book takes on these fascinating contradictions and achieves the rare balance of serving as an introduction for those wishing to learn about the wonders of the ant society, as well as a guide to the latest developments in group functioning and development."—Peter Nonacs, University of California, Los Angeles

"Gordon convincingly argues that the behavior of ants within and outside a colony depends largely upon the simple metric of interactions with others. Provocative and stimulating, this book challenges prevailing paradigms and dogmas about social insect behavior. It will engage biologists interested in social insects and nonbiologists interested in complex systems."—Mark Elgar, University of Melbourne