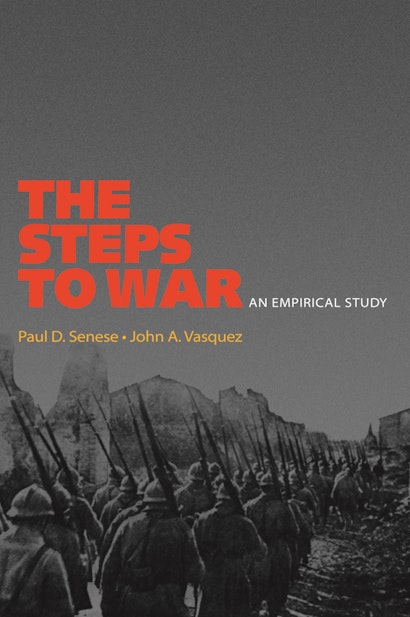 The question of what causes war has concerned statesmen since the time of Thucydides. The Steps to War utilizes new data on militarized interstate disputes from 1816 to 2001 to identify the factors that increase the probability that a crisis will escalate to war. In this book, Paul Senese and John Vasquez test one of the major behavioral explanations of war — the steps to war — by identifying the various factors that put two states at risk for war. Focusing on the era of classic international politics from 1816 to 1945, the Cold War, and the post-Cold War period, they look at the roles of territorial disputes, alliances, rivalry, and arms races and show how the likelihood of war increases significantly as these risk factors are combined. Senese and Vasquez argue that war is more likely in the presence of these factors because they increase threat perception and put both sides into a security dilemma.

The Steps to War calls into question certain prevailing realist beliefs, like peace through strength, demonstrating how threatening to use force and engaging in power politics is more likely to lead to war than to peace.

"In this detailed, complex book, Vasquez and the late Senese set out to add to the 'steps to war' body of literature."—J. Fields, Choice

"[T]his book is an exemplar of empirical peace science. . . . For Paul Senese, whose service to the peace science community and commitment to peace research ended unfortunately too soon, it is a fitting, albeit unwelcome, coda that will continue to inspire us as we endeavor to unravel the enduring problem of international war."—Mark J.C. Crescenzi, Perspectives on Politics

"This is an important book that confirms many of the postulates of the steps to war theory in a compelling fashion. It also provides a seminal example of 'scientific' research in international relations."—Alex Bellamy, Political Studies Review

"This book is highly recommended to the student of conflict data and the general reader capable of wading through the statistical analysis."—Michael Izbicki, International Journal on World Peace

"The Steps to War is a highly creative, well-tested, and strongly persuasive synthesis of the last two generations' empirical analysis of the war onset phenomenon. Let's see if the next generation can do better, or as well, as this superb summation by Senese and Vasquez of their own work of the last decade."—William R. Thompson, Indiana University

"This is a major contribution to the literature on the causes of interstate war. It advances a powerful theory that is informed by a masterful review and synthesis of the quantitative literature and tested by sophisticated empirical methods. It will be a core component of the conflict analysis curriculum for years to come."—Jack S. Levy, Rutgers University

"This is an important book. Senese and Vasquez draw together a great deal of empirical work probing the steps to war theory, a highly regarded and long-lived theory of war and international relations. The book will be widely read, widely cited, and will spark a lot of follow-up work. It will be used by every quantitative researcher in international politics, and probably by a lot of nonquantitative researchers as well."—Douglas Lemke, Pennsylvania State University