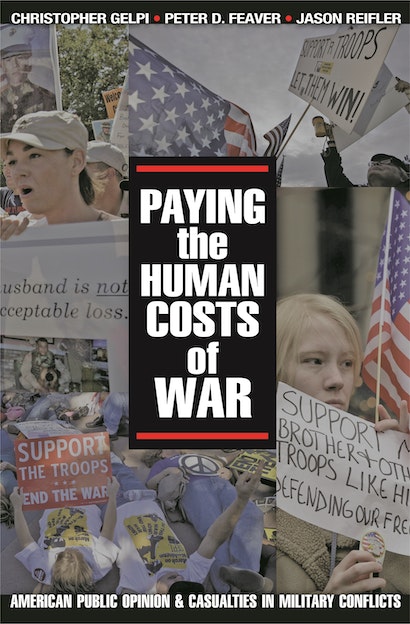 From the Korean War to the current conflict in Iraq, Paying the Human Costs of War examines the ways in which the American public decides whether to support the use of military force. Contrary to the conventional view, the authors demonstrate that the public does not respond reflexively and solely to the number of casualties in a conflict. Instead, the book argues that the public makes reasoned and reasonable cost-benefit calculations for their continued support of a war based on the justifications for it and the likelihood it will succeed, along with the costs that have been suffered in casualties. Of these factors, the book finds that the most important consideration for the public is the expectation of success. If the public believes that a mission will succeed, the public will support it even if the costs are high. When the public does not expect the mission to succeed, even small costs will cause the withdrawal of support.


Providing a wealth of new evidence about American attitudes toward military conflict, Paying the Human Costs of War offers insights into a controversial, timely, and ongoing national discussion.

Christopher Gelpi is professor of political science at Duke University. He is the author of The Power of Legitimacy (Princeton). Peter D. Feaver is the Alexander F. Hehmeyer Professor of Political Science and Public Policy at Duke University. From 2005 to 2007, he served as a special advisor on the National Security Council. Feaver and Gelpi are the coauthors of Choosing Your Battles (Princeton). Jason Reifler is assistant professor of political science at Georgia State University.

"Gelpi and Feaver, and Reifler have produced a most fascinating volume on the human costs of waging war. They set out to understand under what conditions Americans would support their leaders' decision to use military force. . . . Well researched and thoughtfully written."—Choice

"Policy makers would be wise to heed the authors' findings regarding how to gain public trust and support when contemplating the future use of military power in achieving national objectives. For the citizenry, however, a warning also emerges: national leaders may attempt to keep a sinking policy ship afloat by remaining publically optimistic even when nothing can be done to save it."—Walter E. Kretchik, Military History

"One measure of a book's quality is whether it generates questions for future research, and this one certainly fits the bill."—Jennifer L. Merolla, Perspectives on Politics

"[T]his is a well-thought-out, well-organized and well-written book. In particular, the concluding summaries at the end of each chapter provide excellent reviews and syntheses of the arguments. The authors have posed many questions that should open new horizons for scholars and policy makers."—Cigdem Pakel Atahan, Journal of American Studies of Turkey

"Paying the Human Costs of War, an ambitious and provocative new book by three distinguished military commentators, takes on the conventional wisdom that Americans are skittish about casualty numbers, and argues instead that the American people have a much more sophisticated calculus about decisions associated with fighting and dying. A deeply important read for policymakers, military commanders, and the interested public alike."—Kurt M. Campbell, Center for a New American Security

"Gelpi, Feaver, and Reifler have written the most rigorous and thorough—yet also readable and accessible—study of Americans' stomach for war yet published. It is well grounded in Feaver's recent real-world political experience, though there is nothing partisan or self-serving about the book. The practical touch his experience provides is the perfect complement to the academic sophistication underlying the core of the authors' analysis. The new survey data, careful review of the existing literature, commonsense analysis of recent U.S. warfighting operations, and logical clarity of the authors' thinking make the book's main arguments very persuasive."—Michael O'Hanlon, Brookings Institution

"This is a superb, profound, and most timely study of wartime opinion. It offers a compelling antidote to the conventional wisdom that popular support for military missions inevitably collapses with rising casualties. The wide historical sweep along with rigorous statistical tests places this work in a class by itself."—Helmut Norpoth, Stony Brook University

"This book shows that although the U.S. public is sensitive to U.S. casualties suffered in war, the public is more sensitive to perceived defeat and will continue to support operations abroad as long as they are persuaded victory is still likely. The book's arguments are well presented and bolstered with an impressive array of first-rate empirical evidence."—Richard Herrmann, Ohio State University