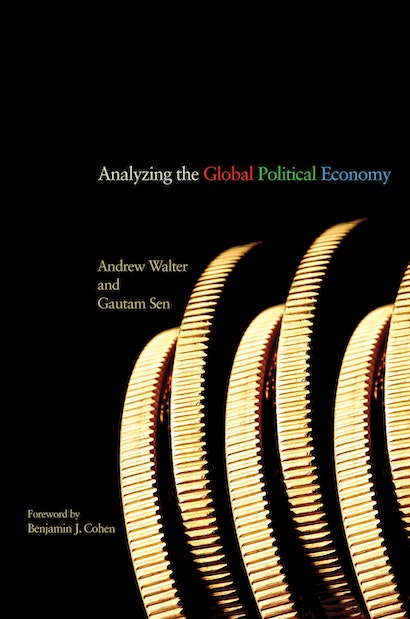 Ideally suited to upper-undergraduate and graduate students, Analyzing the Global Political Economy critically assesses the convergence between IPE, comparative political economy, and economics. Andrew Walter and Gautam Sen show that a careful engagement with economics is essential for understanding both contemporary IPE and for analyzing the global political economy. The authors also argue that the deployment of more advanced economic theories should not detract from the continuing importance for IPE of key concepts from political science and international relations. IPE students with little or no background in economics will therefore find this book useful, and economics students interested in political economy will be alerted to the comparative strengths of political science and other social science disciplines.

"Walter and Sen's Analyzing the Global Political Economy is more of an academic text than an assessment of the current crisis but it concisely explains the building blocks of the system and gives a historic and philosophical context to our understanding of its evolution and relevance in today's climate."—David Maguire, Shanghai Daily

"By organizing the text in the way they have, the authors tie together several critical areas of international political economy. The material flows nicely from topic to topic, demonstrating what we have learned from economic analysis, how political science approaches the same issue, and then the best results from both disciplines. It really captures the 'state of the art' in our field."—Mark R. Brawley, McGill University

"Analyzing the Global Political Economy shows how a critical engagement with economics contributes to a thorough understanding of international political economy. The volume represents an antidote to approaches that ignore economic rationality and to much post-9/11 thinking that reduces matters in international relations to realist impulses. Walter and Sen focus on what really matters, and provide a smarter, more purposeful introduction to the field."—Timothy J. Sinclair, University of Warwick

"This book will attract teachers seeking a compact core text that introduces key findings from economics and political science in accessible form. The authors are fans of the turn to economics in international political economy but they also note some of its shortcomings."—John Odell, University of Southern California

"Walter and Sen do a magisterial job of surveying classic and contemporary literature across the areas of trade, investment, and money. Identifying the major literature and arguments, this textbook is a valuable pedagogical contribution. I know of no other book that is as thorough and concise."—David Leblang, University of Colorado

"There is much to admire about this book—it is short, well-written, and covers the subject matter comprehensively. It does a good job reviewing the literature on the multilateral trading system and explaining the trend toward greater exchange rate flexibility."—Jeffrey A. Hart, Indiana University