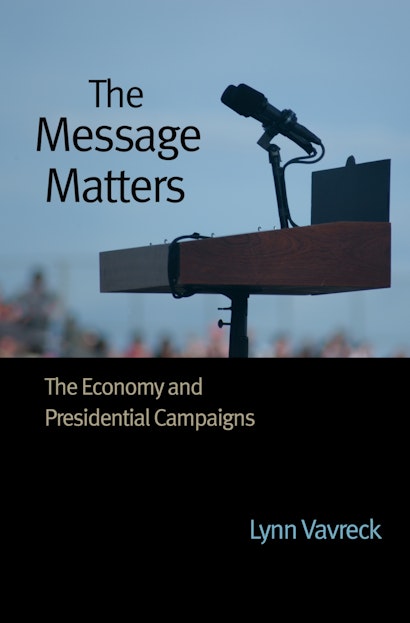 The economy is so powerful in determining the results of U.S. presidential elections that political scientists can predict winners and losers with amazing accuracy long before the campaigns start. But if it is true that “it’s the economy, Stupid,” why do incumbents in good economies sometimes lose? The reason, Lynn Vavreck argues, is that what matters is not just the state of the economy but how candidates react to it. By demonstrating more precisely than ever before how candidates and their campaigns affect the economic vote, The Message Matters provides a powerful new way of understanding past elections — and predicting future ones.


Vavreck examines the past sixty years of presidential elections and offers a new theory of campaigns that explains why electoral victory requires more than simply being the candidate favored by prevailing economic conditions. Using data from presidential elections since 1952, she reveals why, when, and how campaign messages make a difference — and when they can outweigh economic predictors of election outcomes.

Lynn Vavreck is associate professor of political science at the University of California, Los Angeles. She is coeditor of Campaign Reform: Insights and Evidence and coprincipal investigator of the Cooperative Campaign Analysis Project.

"This is not just another book about the impact of the economy on elections. The Message Matters breaks new ground in showing how presidential candidates effectively use the economy when it works in their favor and how some candidates win even when the economy is working against them."—Stanley B. Greenberg, American Prospect

"Lucid writing sheds light on a subject often neglected, and readers can glean some useful information."—Choice

"This is an impressive book. Vavreck's main contributions are to offer a coherent theory of how economic context should condition campaign effects, to document what types of campaigns presidential candidates have run, and to show that those candidates running the campaigns she suggests have influenced the election in their favor."—Jonathan Nagler, Political Science Quarterly

"Vavreck's book is an interesting and very readable contribution for people with an interest in media and election studies. The themes candidates use within American election cycles are now much better illuminated and Vavreck opens the door for a host of exciting analyses that will likely be built on The Message Matters' foundation."—Anders B. Rasmussen, MedieKultur

"Vavreck's creative theorizing and informative historical analysis will change the way political scientists think about presidential campaigns. While giving campaign strategists their overdue due, she also sheds invaluable light on how political contexts shape their strategies and their odds of success."—Larry M. Bartels, author of Unequal Democracy

"Lynn Vavreck's message matters. She explains how and when candidate messages can clarify distinctions and gain vote share over the course of a campaign. Moving beyond puerile arguments about whether campaigns matter, Vavreck identifies critical differences among issues—and between incumbents and challengers—that determine which messages are persuasive."—Samuel L. Popkin, University of California, San Diego

"Professor Vavreck shows, for the first time, how the economy plays for or against political candidates in the context of their campaigns. The work is a monumental theoretical and empirical achievement that promises to become a political science classic."—Michael S. Lewis-Beck, author of Economics and Elections

"A pathbreaking contribution to the study of American politics, The Message Matters provides new insights into how campaigns affect the magnitude of the economic vote. It will be required reading for anyone doing serious work in the field of campaigns."—Raymond Duch, Nuffield College, University of Oxford