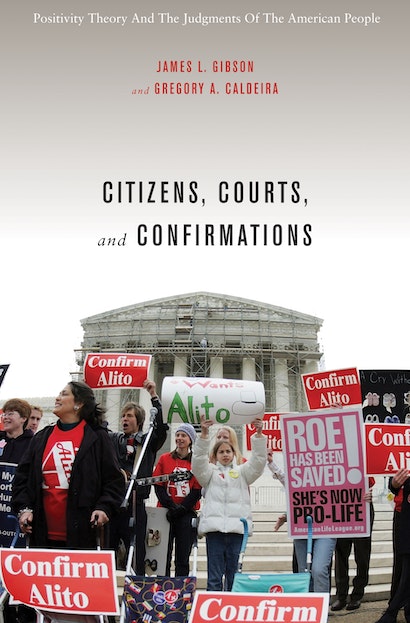 In recent years the American public has witnessed several hard-fought battles over nominees to the U.S. Supreme Court. In these heated confirmation fights, candidates’ legal and political philosophies have been subject to intense scrutiny and debate. Citizens, Courts, and Confirmations examines one such fight — over the nomination of Samuel Alito — to discover how and why people formed opinions about the nominee, and to determine how the confirmation process shaped perceptions of the Supreme Court’s legitimacy.


Drawing on a nationally representative survey, James Gibson and Gregory Caldeira use the Alito confirmation fight as a window into public attitudes about the nation’s highest court. They find that Americans know far more about the Supreme Court than many realize, that the Court enjoys a great deal of legitimacy among the American people, that attitudes toward the Court as an institution generally do not suffer from partisan or ideological polarization, and that public knowledge enhances the legitimacy accorded the Court. Yet the authors demonstrate that partisan and ideological infighting that treats the Court as just another political institution undermines the considerable public support the institution currently enjoys, and that politicized confirmation battles pose a grave threat to the basic legitimacy of the Supreme Court.

James L. Gibson is the Sidney W. Souers Professor of Government at Washington University in St. Louis. His books include Overcoming Apartheid: Can Truth Reconcile a Divided Nation?
Gregory A. Caldeira holds the Ann and Darrell Dreher Chair in Political Communication and Policy Thinking at Ohio State University.

"Citizens, Courts, and Confirmations is a significant contribution to the literature on judicial politics. Its findings are interesting and unique, and it provides a number of insights likely to prompt further studies of courts and the citizenry. . . . Any scholar or citizen interested in the interrelations of courts and public opinion should read Citizens, Courts, and Confirmations, and it will surely find its way on to the syllabi of numerous graduate courses on judicial politics."—Richard L. Vining, Law and Politics Book Review

"As a piece of research, Citizens is everything court scholars have come to expect from these two authors: its innovative methodology and provocative findings contribute significantly to the literature on public opinion and the judiciary. . . . Like any good study, Citizens both advances the literature and serves as an impetus for future work."—Nicholas LaRowe, Journal of Politics

"In this exceptionally well-crafted book, Gibson and Caldeira assess changes in the way the media can influence public support for the Supreme Court. This pathbreaking book is every bit as careful, rigorous, and important as we would expect work by these esteemed authors to be."—Jeffrey Segal, Stony Brook University, State University of New York

"In one sense, Citizens, Courts, and Confirmations is a study of the Alito nomination. But in another it is so much more—a rich and fascinating story about the public's attitudes toward the Supreme Court told by two of today's most eminent political scientists. Anyone with an interest in presidential appointments, public opinion, or institutional legitimacy should move Citizens, Courts, and Confirmations to the top of their reading list."—Lee Epstein, Northwestern University School of Law

"A truly comprehensive look at the dynamics of public support for the Supreme Court and for a nominee. This is the single best study of this subject, and the most theoretically rich study to date. The findings are numerous. I expect that it will become an important book in the field of law and the courts, and that it will be widely cited."—Valerie Hoekstra, Arizona State University

"In Citizens, Courts, and Confirmations, Gibson and Caldeira present an elaborate, multifaceted interpretation of Americans' attitudes toward the Supreme Court. Numerous provocative and surprising findings are reported along the way. This is a major work, one that paves the way for future research on public opinion and the Supreme Court. It is an understatement to say that it is a much-welcomed addition to the field."—Jeffery J. Mondak, University of Illinois, Urbana-Champaign