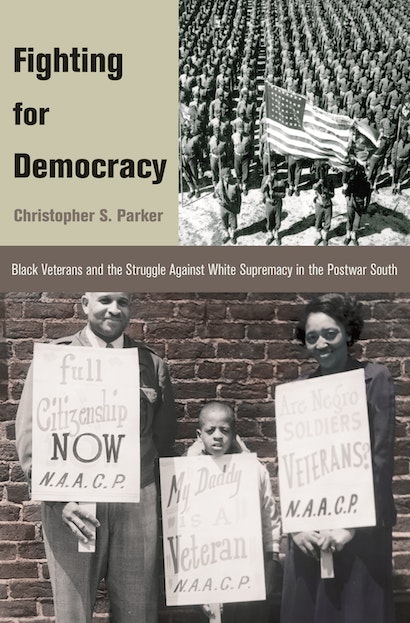 Fighting for Democracy shows how the experiences of African American soldiers during World War II and the Korean War influenced many of them to challenge white supremacy in the South when they returned home. Focusing on the motivations of individual black veterans, this groundbreaking book explores the relationship between military service and political activism. Christopher Parker draws on unique sources of evidence, including interviews and survey data, to illustrate how and why black servicemen who fought for their country in wartime returned to America prepared to fight for their own equality.

Parker discusses the history of African American military service and how the wartime experiences of black veterans inspired them to contest Jim Crow. Black veterans gained courage and confidence by fighting their nation’s enemies on the battlefield and racism in the ranks. Viewing their military service as patriotic sacrifice in the defense of democracy, these veterans returned home with the determination and commitment to pursue equality and social reform in the South. Just as they had risked their lives to protect democratic rights while abroad, they risked their lives to demand those same rights on the domestic front.

Providing a sophisticated understanding of how war abroad impacts efforts for social change at home, Fighting for Democracy recovers a vital story about black veterans and demonstrates their distinct contributions to the American political landscape.

Christopher S. Parker is assistant professor of political science at the University of Washington, Seattle. He served in the U.S. Navy and Naval Reserve for ten years.

"[T]his is a beautifully crafted piece of scholarship. . . . The analysis is lucid, speaks to multiple theoretical domains, and smartly combines textured qualitative research with rigorous quantitative data. . . . [T]he principal findings of the research are well substantiated and provocative. Fighting for Democracy deserves to be avidly read by all those interested in the nexus of military socialization, political participation, and the struggle for racial equality."—Joseph E. Luders, Perspectives on Politics

"Rare it is that a book alters the way we see history. But that is certainly the case here. The canonical account of the civil rights struggle holds that it was nurtured in the black church, with an assist from select black colleges and NAACP chapters. Through careful, painstaking scholarship, Parker shows that returning black World War II veterans played a vital role as well. In doing so, he restores the veterans to their rightful place in the history of the struggle. Consider the canonical account revised."—Doug McAdam, Stanford University

"Fighting for Democracy offers a strikingly new and important analysis of the relationship between African Americans' military service and the sources of the civil rights movement. It puts forth a highly original and fascinating argument, one that emanates theoretical sophistication, strong empirical underpinnings, and analytical astuteness."—Suzanne Mettler, Cornell University

"Fighting for Democracy is an impressive work. Parker makes a compelling argument about the important role that military experience played in encouraging black political participation during the civil rights movement. Well-written, accessible, and rigorous, the book's attention to history and theoretical development is top-notch."—Vincent Hutchings, University of Michigan

"Meticulously researched, deeply informative, and engrossing throughout, Fighting for Democracy is a brilliant exposition of the powerful and politicizing effect of military service on African American men during the civil rights era. It heralds the debut of an important and original voice among political scientists."—Taeku Lee, University of California, Berkeley