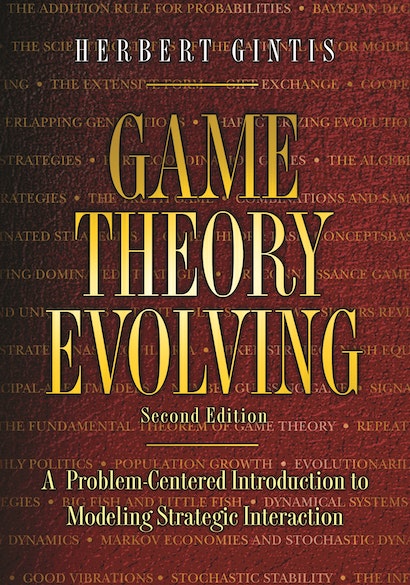 Since its original publication in 2000, Game Theory Evolving has been considered the best textbook on evolutionary game theory. This completely revised and updated second edition of Game Theory Evolving contains new material and shows students how to apply game theory to model human behavior in ways that reflect the special nature of sociality and individuality. The textbook continues its in-depth look at cooperation in teams, agent-based simulations, experimental economics, the evolution and diffusion of preferences, and the connection between biology and economics.


Recognizing that students learn by doing, the textbook introduces principles through practice. Herbert Gintis exposes students to the techniques and applications of game theory through a wealth of sophisticated and surprisingly fun-to-solve problems involving human and animal behavior. The second edition includes solutions to the problems presented and information related to agent-based modeling. In addition, the textbook incorporates instruction in using mathematical software to solve complex problems. Game Theory Evolving is perfect for graduate and upper-level undergraduate economics students, and is a terrific introduction for ambitious do-it-yourselfers throughout the behavioral sciences.

"Gintis has wholeheartedly embraced the evolutionary approach to games. . . . The author is an accomplished economist raised in the classical mold, and his background shows in many aspects of the book . . . [He] has important things to say."—Karl Sigmund, Science

"Game Theory Evolving is an exceptionally well-written and constructed introduction to the field. And with Gintis' outline of agent-based modeling and his tips for programming, many readers may be motivated to take up his invitation and experiment with a problem in evolutionary dynamics of their own."—Jennifer M. Wilson, Mathematical Reviews

"An inspiring introduction to the potential and various applications of game theory."—Jan Ekman, Ecological Economics