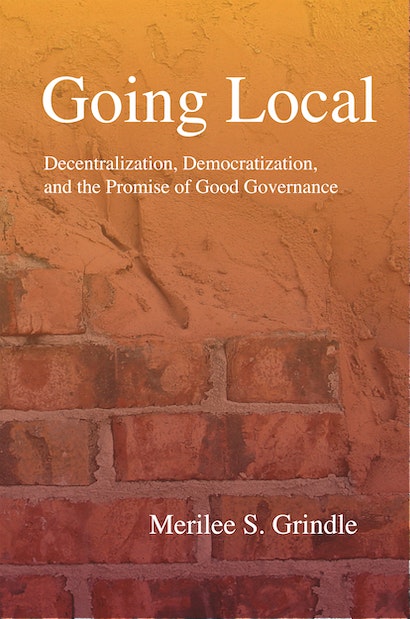 
Combining quantitative and qualitative methods, Grindle examines data based on a random sample of Mexican municipalities — and ventures into town halls to follow public officials as they seek to manage a variety of tasks amid conflicting pressures and new expectations. Decentralization, she discovers, is a double-edged sword. While it allows public leaders to make significant reforms quickly, institutional weaknesses undermine the durability of change, and legacies of the past continue to affect how public problems are addressed. Citizens participate, but they are more successful at extracting resources from government than in holding local officials and agencies accountable for their actions. The benefits of decentralization regularly predicted by economists, political scientists, and management specialists are not inevitable, she argues. Rather, they are strongly influenced by the quality of local leadership and politics.

Merilee S. Grindle is Edward S. Mason Professor of International Development at the Kennedy School of Government and Director of the David Rockefeller Center for Latin American Studies at Harvard University. She is the author, most recently, of Despite the Odds: The Contentious Politics of Education Reform (Princeton).

"In analyzing the exciting array of promising reforms as well as the inertia of clientelistic traditions, Grindle weights the introduction of political-party competition, the role of innovative ideas and entrepreneurial leaders, the implementation of modern methods of public administration, and the logic of civil society."—Richard Feinberg, Foreign Affairs

"Merilee Grindle has already made her reputation as a painstaking scholar of governance, bureaucracy and policymaking in Latin America and across the developing world, but Going Local seals her standing as a leading analyst of governance."—Diane E. Davis, ReVista

"[T]his book will be a valuable reference not only for scholars interested in decentralization or local government in Mexico, but for anyone who is interested in public affairs. . . . Grindle contributes to all these discussions, and does so in an entertaining and convincing way."—Guillermo M. Cejudo, Public Administration Review

"Going Local provides an important contribution to our understanding of just these issues. This book provides what is perhaps the most methodologically sound, comprehensive look at the effects of decentralisation in Mexico."—Emily Edmonds-Poli, Bulletin of Latin American Research

"Grindle's research has a strong practical orientation, and focuses on the nuts-and-bolts of implementing sustainable reform in industrializing countries. . . . Going Local is applied research at its best."—Francis E. Hutchison, ASEAN Economic Bulletin

"Going Local makes a strong, original, and lively contribution to the literature on governance in developing countries. Grindle's work examines local politics in a way that makes them integral to the analysis of positive as well as negative outcomes. As in all good research, her findings seem to cut across the existing paradigms, building on them while at the same time moving our understanding of the world to a higher plane."—Judith Tendler, Massachusetts Institute of Technology

"Decentralization is one of the central processes underway in most countries and Merilee Grindle offers nuanced context about this development. Beyond the specific findings, Going Local can serve as a model for how to do theory-based scholarship with innovative methods and fieldwork."—John Bailey, Georgetown University